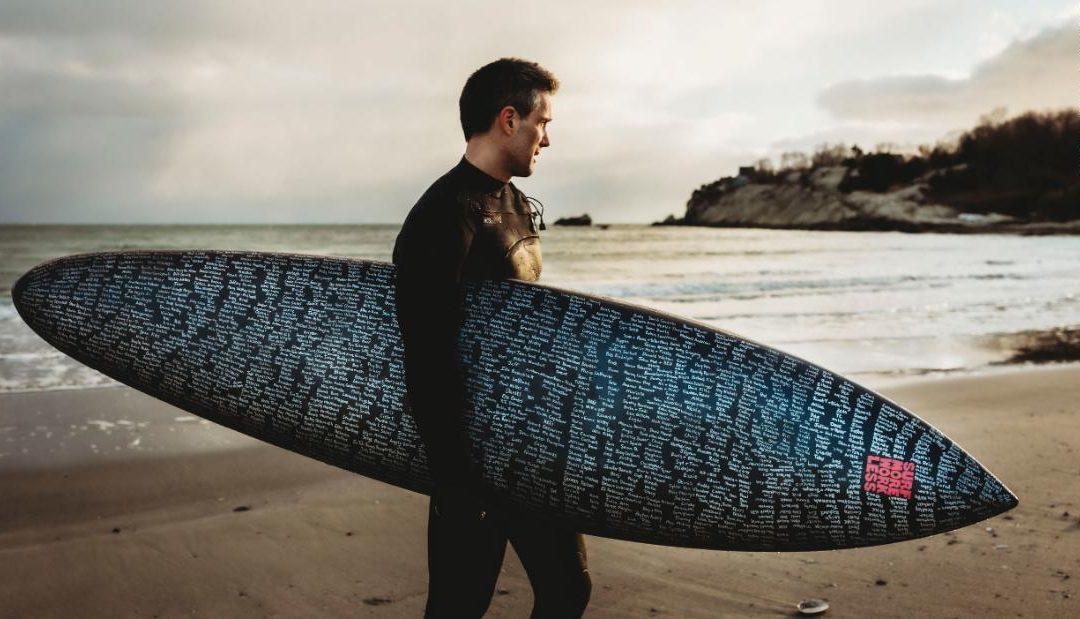 Editor’s note: Two years ago, Covid-19 turned the world upside down. While the pandemic is not over, The Best in Us is a series that highlights people whose pandemic stories exemplify the resilience of the human spirit.

(CNN) Dan Fischer has always found solace in the ocean. As a child, he loved going to the beach and riding bikes along the coastline with his father, Karl Fischer. So when he lost his dad to pancreatic cancer and his dog of 15 years, Rudy, died shortly afterward, he turned to the healing power of the water. At the start of this year, Fischer wrote his father’s name on his surfboard and took it out to sea in Newport, Rhode Island. His father’s name glistened in the sun on what felt like a shared adventure, he says. Inspired, Fischer made a video and posted it on social media the same day. “If you love the ocean, or you know someone who loves the ocean, or maybe you lost someone who just love[d] being outdoors … comment on this video with their name and a bit of their story, and I’ll put their name on my board here, just like I’ve done with my dad upfront,” he says in the video. “And I’ll take them out in the ocean for you. “Names poured in from thousands of strangers grieving the loss of loved ones, a response exacerbated by a relentless pandemic. And with that, the One Last Wave Project was born. 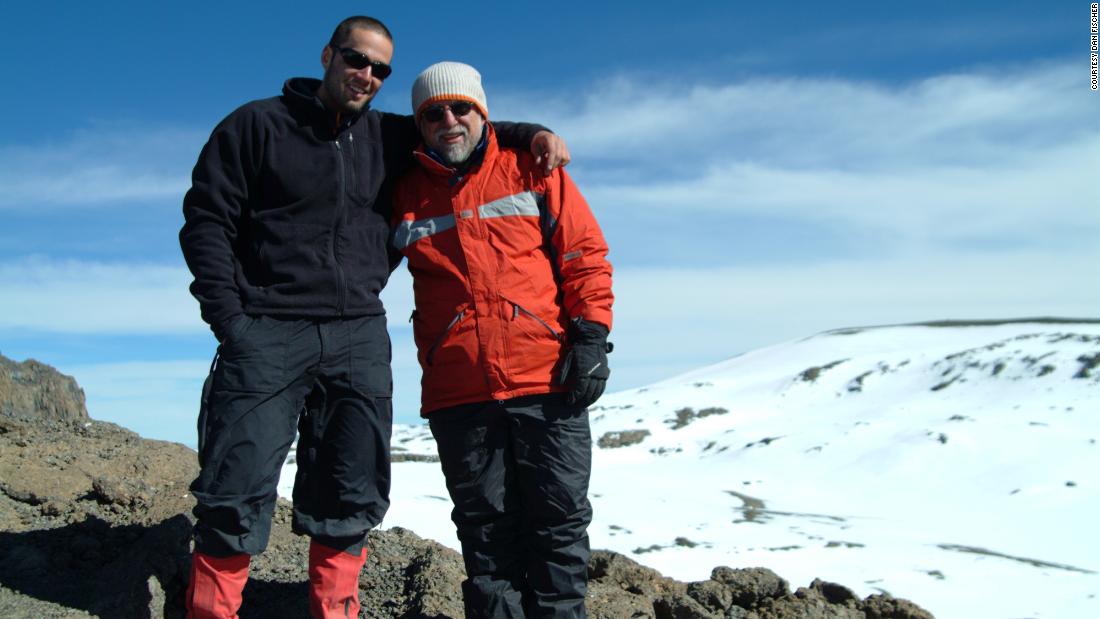 A community of strangers are healing together

About two months later, Fischer has received over 5,000 names and written most of them on two surfboards. The first two surfboards ran out of space — he’s working on getting more. He’s surfed the boards several times.With his silver sharpie, he writes the names in neat letters on the surfboard and puts a clear acrylic coat over them so they don’t wash off. Sometimes, he makes a video or takes a photo of a name and shares it with the person’s loved ones. He also posts photos of the surfboard with the names on social media.

Even though you know it’s happening to other people, there’s a feeling of solitude.”

After grieving his father alone during the pandemic, which began roughly two years ago this week, Fischer started the One Last Wave Project to exchange stories with a community of people going through the same pain. They’re essentially healing together, he says. “You feel like you’re the only one that’s dealing with that. Even though you know it’s happening to other people, there’s a feeling of solitude,” Fischer says. “And when I was able to be vulnerable in those moments and share my grief with other individuals, it allowed other people to sort of break down that barrier of feeling alone and be able to share their loved ones as well.” 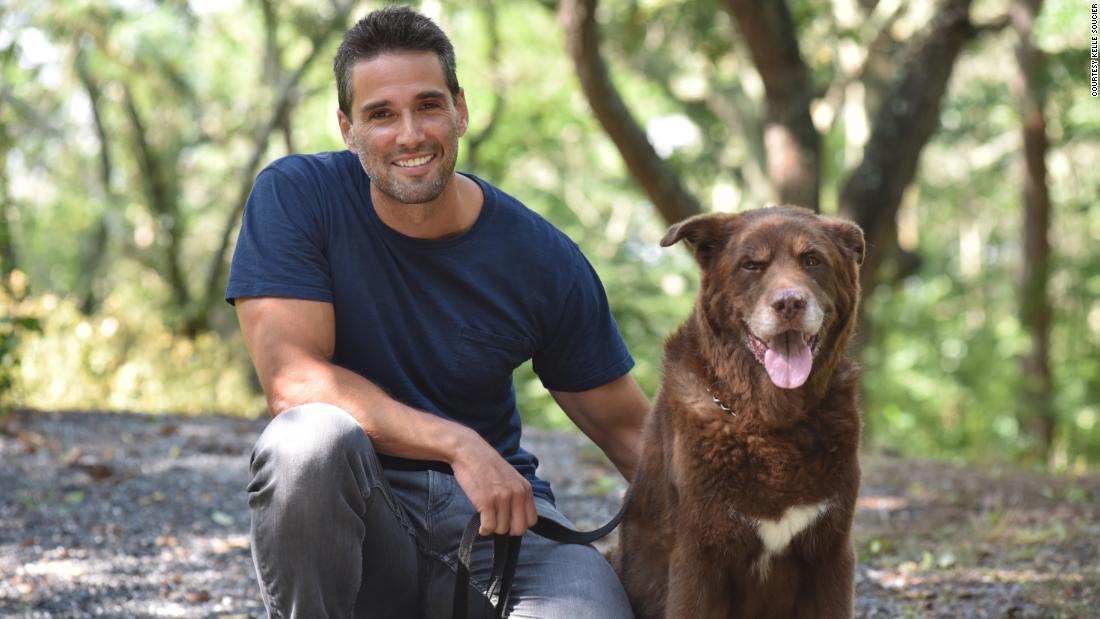 Dan Fischer and his beloved dog Rudy.Fischer, 42, started surfing at a young age and has rekindled his passion in recent months as a way to cope with loss. “Surfing is so healing. You’re so deeply connected to the ocean and to nature, and the saltwater immersion sort of washes away all the negativity that’s going on inside of you,” he says. Though a lot of people have been struggling with grief in the pandemic, Fischer was stunned by the responses that have poured in. “If I was able to help one person or one person shared their name, that would have been enough for me,” he says. “But I was blown away — by not just the number of people sharing, but the depth of stories and love that they were sharing.”

Messages have come in from all over the world

Fischer lives close to several beaches in Newport and spends a lot of time in the ocean. Most days, he decides the best time to surf based on the wave rise and patterns.He also spends a lot of time these days going through comments and direct messages he receives on social media. He has received requests from as far away as New Zealand and South Africa, he says. Most of the messages involve someone who had a deep love for the ocean. Others had yearned to visit to the beach but didn’t get a chance to go before illness struck. “We get messages from parents who’ve lost children who always wanted to learn to surf, or who had such fond memories of being at the beach and building sandcastles,” Fischer says. 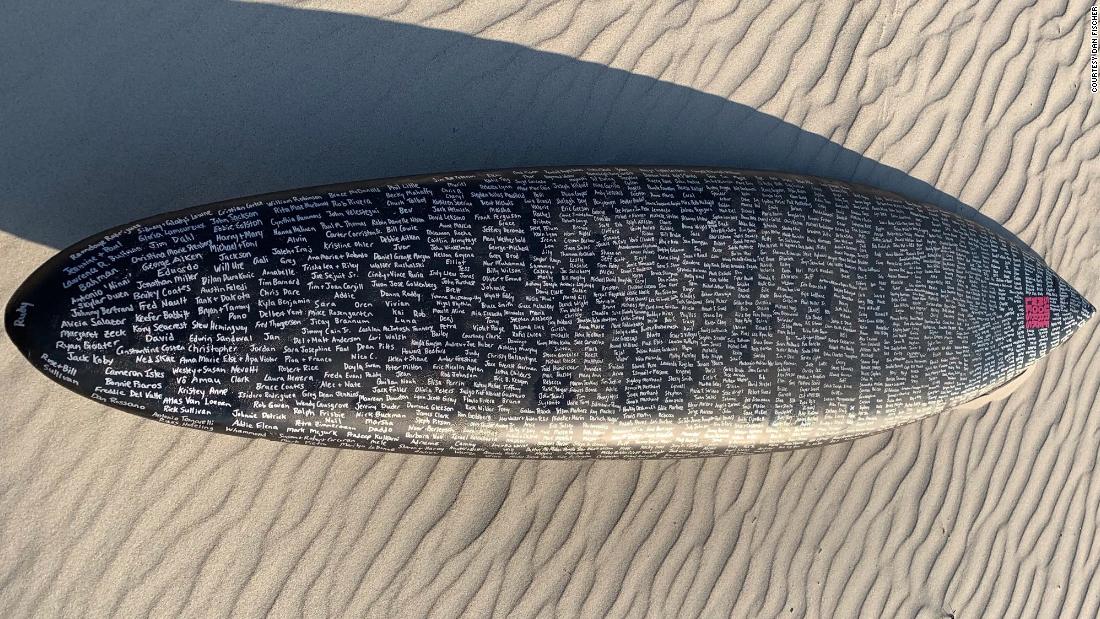 Fischer’s surfboards are covered with hundreds of names of departed loved ones. “People who are in hospice care who had never got a chance to be there or someone’s last dying wish,” he adds. “I had someone who was in the hospital deciding medically to end their life. And one of the family members had reached out and asked if they could be a part of the project. And of course, I said yes.”

A daughter’s memory lives on

Chicago resident Jennifer Lawnicki came across Fischer’s message on TikTok in January. Her daughter, Peyton Avery, died at age 4. Peyton was diagnosed with leukemia when she was seven months old after she became lethargic and was rushed to the emergency room. Doctors didn’t think she’d make it through the night, but she defied expectations and lived for several years. 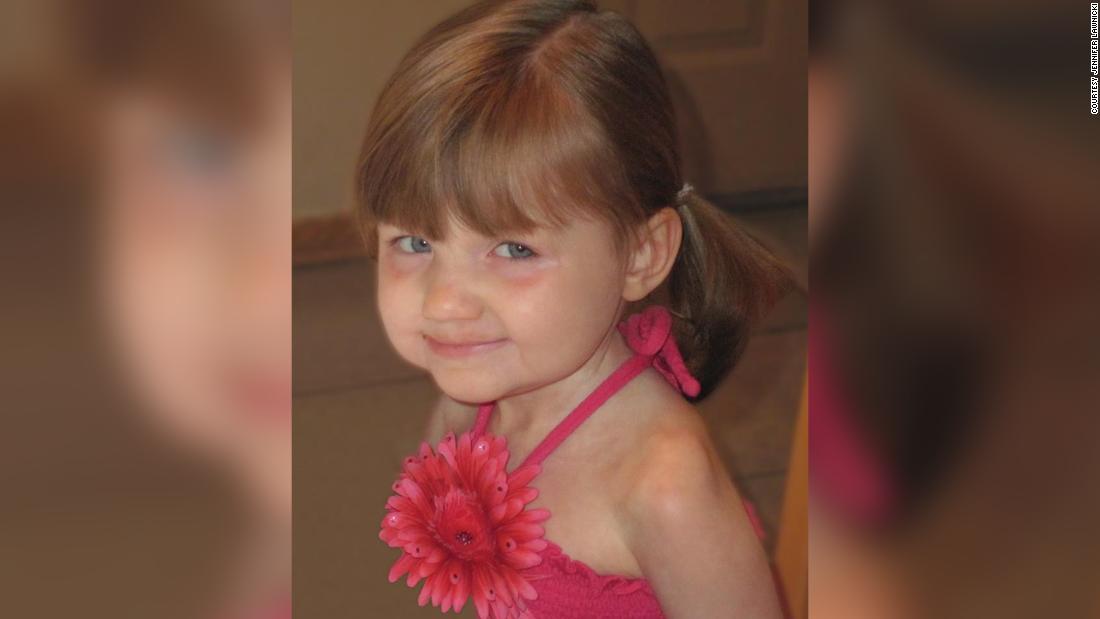 Peyton Lawnicki, 4, died of leukemia. She loved dolphins and the ocean. Fischer has honored her as part of his One Last Wave Project. She loved dolphins and the ocean, and though she spent most of her short life hospitalized, her mother took her to the beach every chance she got. So when a stranger posted an opportunity to connect her daughter with the ocean she’d loved so much, Lawnicki was among the first people to send Fischer a message. “I thought I’d give it a shot. He replied and put Peyton’s name on his board,” Lawnicki says. “I was ecstatic knowing Peyton would have been overjoyed having her name on his surfboard. Dan made a video showing me he was taking Peyton with him, and it affected me more than I thought.”

I know she was with him that day.

For Lawnicki, the idea that a perfect stranger took the time to write Peyton’s name on his board and make a video about her was overwhelming. “I know she was with him that day. I can’t explain the connection I now feel to Dan other than great appreciation and love,” she says. “We have kept in touch and I try to send him words of encouragement and support, letting him know this small but amazing gesture has a great impact on people. “Lawnicki has a photo of the board with her daughter’s name sitting on her desk. Fischer says Peyton’s story was among the first ones submitted for the One Last Wave Project, and it affirmed his belief to keep it going.

What’s next for the project

Fischer hopes to expand the project to reach even more people. “It’s had a really profound impact on me,” he says. “Being able to combine a passion of surfing with helping other individuals heal is something that took precedence over everything else in the last few weeks. “Numerous people have reached out with offers for help, including expertise in marketing, design and donations to get more boards.  And while he welcomes the help to expand the project, he says, donations are not necessary to put a loved one’s name on the surfboards. “I make it very clear every time someone says, you know, how can I donate? I want them to know that I don’t want them to feel that they have to donate in order to have their loved one on there. It’s never what it’s been about, and it never will be,” he says. Fischer will keep taking strangers’ loved ones out to sea, one wave at a time. And he plans to take his project around the world and connect with even more people — through shared grief and the power of the ocean.

CNN Digital is the world leader in online news and information and seeks to inform, engage and empower the world. Staffed 24 hours, seven days a week by a dedicated team in CNN bureaus around the world, CNN’s digital platforms deliver news from almost 4,000 journalists in every corner of the globe.