“A Look Back: Dogtown and Z Boys” (mini documentary about the documentary) by Glen E. Friedman via Thrasher Mag 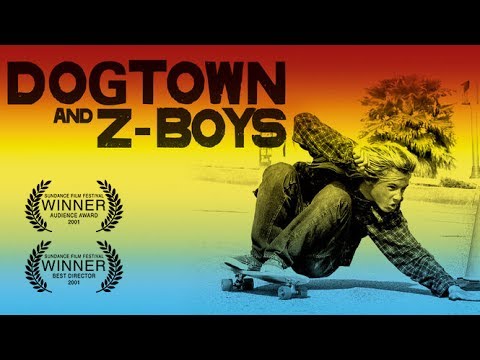 Dogtown and The Z Boys found an audience outside of the traditional skateboard community. Tony Alva, Peggy Oki, Stacy Peralta and more from the OG Zephyr scene break down why it worked and what was missing.

Big Thanks to Glen E Friedman and Vans.

Dogtown and Z-Boys is a 2001 documentary film produced by Agi Orsi and directed by Stacy Peralta.[1] The documentary explores the pioneering of the Zephyr skateboard team in the 1970s (of which Peralta was a member) and the evolving sport of skateboarding. Using a mix of film of the Zephyr skateboard team (Z-Boys) shot in the 1970s by Craig Stecyk, along with contemporary interviews, the documentary tells the story of a group of teenage surfer/skateboarders and their influence on the history of skateboarding (and to a lesser extent surfing) culture.

Dogtown and Z-Boys, narrated by Sean Penn, begins with the history of skateboarding in Southern California and how it had been strongly influenced by the surf culture in the surrounding areas of Santa Monica and Venice, nicknamed Dogtown.[2] Surf shop owners Jeff Ho, Skip Engblom, and Craig Stecyk established the Zephyr Skateboard Team with local teenagers from broken homes.[3] The sport of skateboarding continued to evolve as the Z-Boys continued to bring edgy moves influenced by surfing. During one of California’s record-breaking droughts, local backyard pools were emptied and became hotspots for these young skateboarders looking for places to skateboard.[2] The members of the Zephyr team gained notability and national attention when they competed in skateboard championships and started to receive media attention for their skills as young athletes. Testimonials and commentary provided by the members and founders of the Zephyr team combined with the rock-and-roll soundtrack and vintage footage all come together in this documentary about the history and lives of the original Z-Boys and skateboarding subculture of California.[4] The two paragraphs above were pulled from Wikepedia.

Thrasher is a skateboarding magazine founded in January 1981 by Eric Swenson and Fausto Vitello. The publication consists primarily of skateboard and music-related articles, photography, interviews and skatepark reviews.