“A NEW TRUCK BRAND, IN THIS ECONOMY?” by Larry Lanza via Jenkem Mag 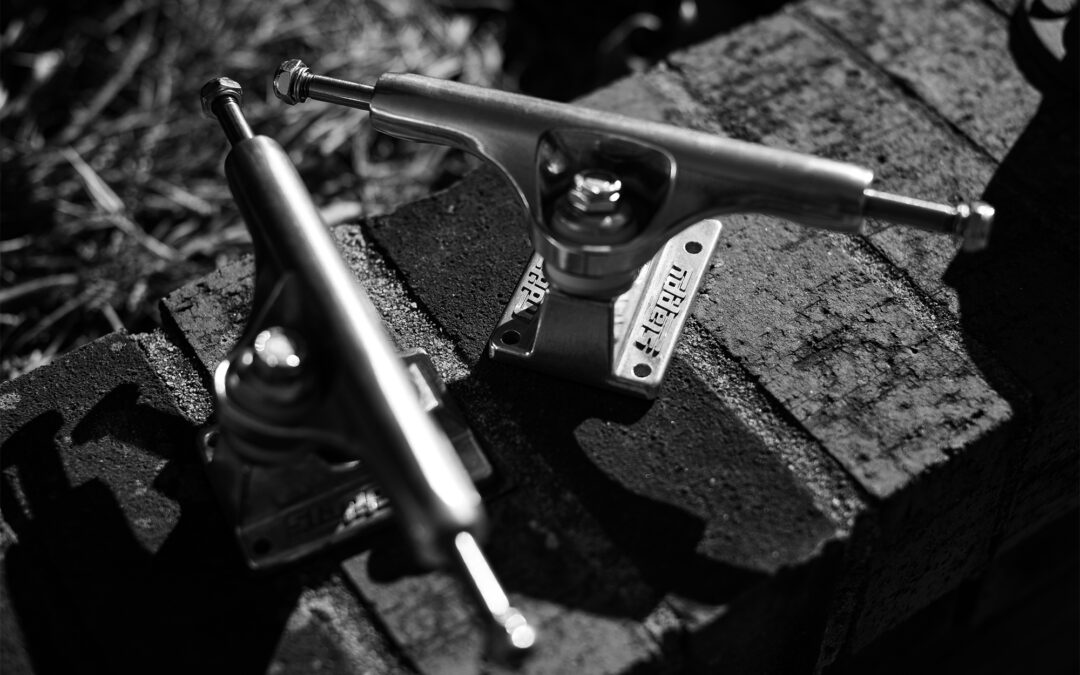 If you weren’t aware, Mike Sinclair recently announced that he’s been working on a new brand called Slappy Trucks. Sinclair has been a team manager for some of the biggest brands and some of the most notable skaters for the last 20 years but has never actually had a company of his own.

It doesn’t take a total skate nerd to know that the truck game is dominated by three brands, and breaking into that world seems nearly impossible. However, he’s determined to make sure his quarantine project comes to fruition, even if it doesn’t take off.

To hear more about Sinclair’s project, and what makes Slappy Trucks special, we tracked him down to see what we could dig out of him. Like the industry-savvy man he is, Sinclair kept his cards close to his chest and didn’t want to spill too much, but we did poke around enough so you can make some judgments of your own.

This seems like a weird time to start a business. Did anyone try to talk you out of it?
Just myself, many times over.

Do you promise this isn’t an elaborate scheme backed by Nike to try and get into the hardgoods market?
I promise on my life, it’s just me and nobody else is behind this [laughs].

Why trucks? Why not boards or a clothing company?
I took COVID super seriously. I was in the house for a year straight, maybe longer. I was thinking when this all ends I should come out with something new. Boards seemed too easy and I was like, well I worked for Tum Yeto, maybe they’ll let me do my own thing. I talked to them and they were like, “If you want.” I thought about it and I was off it. Everybody uses two or three different wood sources, so no matter what, everybody’s got the same board. It’s kind of stupid, but I still love it and may do a board brand one day.

Then I was like, “What about wheels?” and I’m like, “Aw, man. There’s like two top-secret formulas and ain’t nobody getting them.” But then I was like, “You know what? This pandemic is probably going to last a couple of years. What’s the hardest thing I can try to do? Trucks.” I did it because I was bored out of my mind and I started messing around with my trucks.

It was either get into trucks or learn Japanese and I was like, “I’m going to do the trucks” [laughs]. I figured I can still Google Translate and kick it with all the Japanese kids I work with. 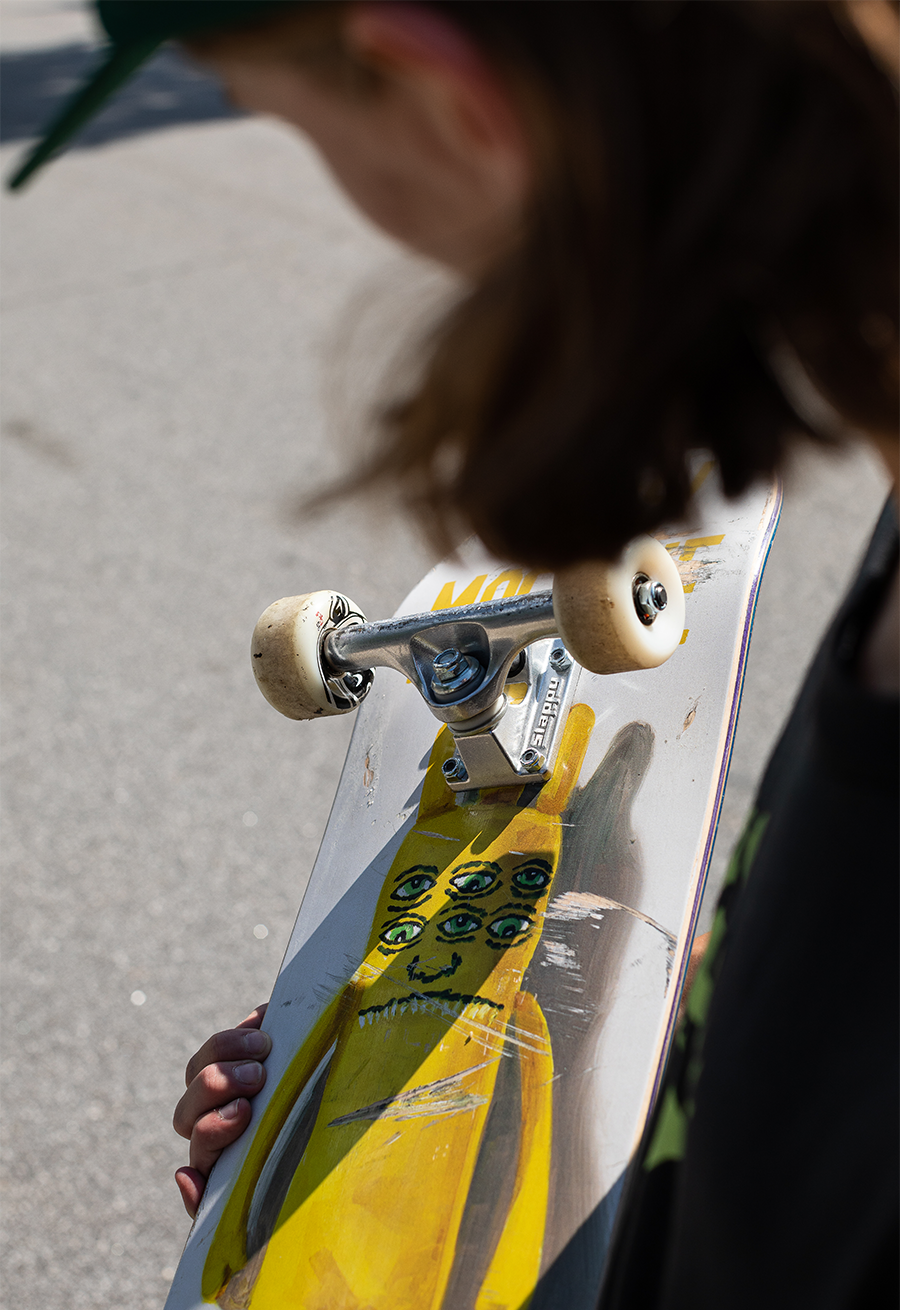 How much start-up capital do you need to start a truck company?
I haven’t done my first expense sheet yet, so it’s to be determined. It’s definitely more of an investment than boards or wheels to get started.

Can you at least spill how much a mold for a truck costs?
[laughs] A used Honda Civic.

Do you think naming the company “Slappy” is too on the nose? It’s like calling your wheel company “Powerslide.”
Nah, names are tough. Slappies are all about fun and that’s what this project was to me.

“I’M WELL AWARE THAT EVERY OTHER TRUCK COMPANY, BESIDES THE GIANTS, HAS GONE OUT OF BUSINESS.”

Did you get nervous after seeing Oski’s truck company, Lurpiv, open and close so quickly?
No. I don’t know what happened to Lurpiv, but I was stoked to see Oski do something different. I still don’t know what Lurpiv means, but I don’t think that’s why it went out of business [laughs].

My best guess is this – I could be wrong so I apologize to Oski and his crew – the overhead might’ve been too high. I honestly have no idea and I hope they come back.

I’m well aware that every other truck company, besides the giants, has gone out of business. They all fail. I’m not here to prove them wrong, I’m just here to give it my own shot. It’s just me. I don’t rent a space, I don’t have a staff to cover. There is an artist who I’d really like to thank, Anthony Yankovic.

I got small expectations. I’m going to make some trucks. If you want them, they’re available. They’re limited, you know what I mean? It ain’t Supreme limited, but if they sell out, I’ll make more. I’ll put this statement out there – this company will never go out of business. If I run out of money, we are just on pause [laughs]. Or If it turns into a nightmare, it’s all good, we’ll bury them in the backyard and move on, it’s all good [laughs]. 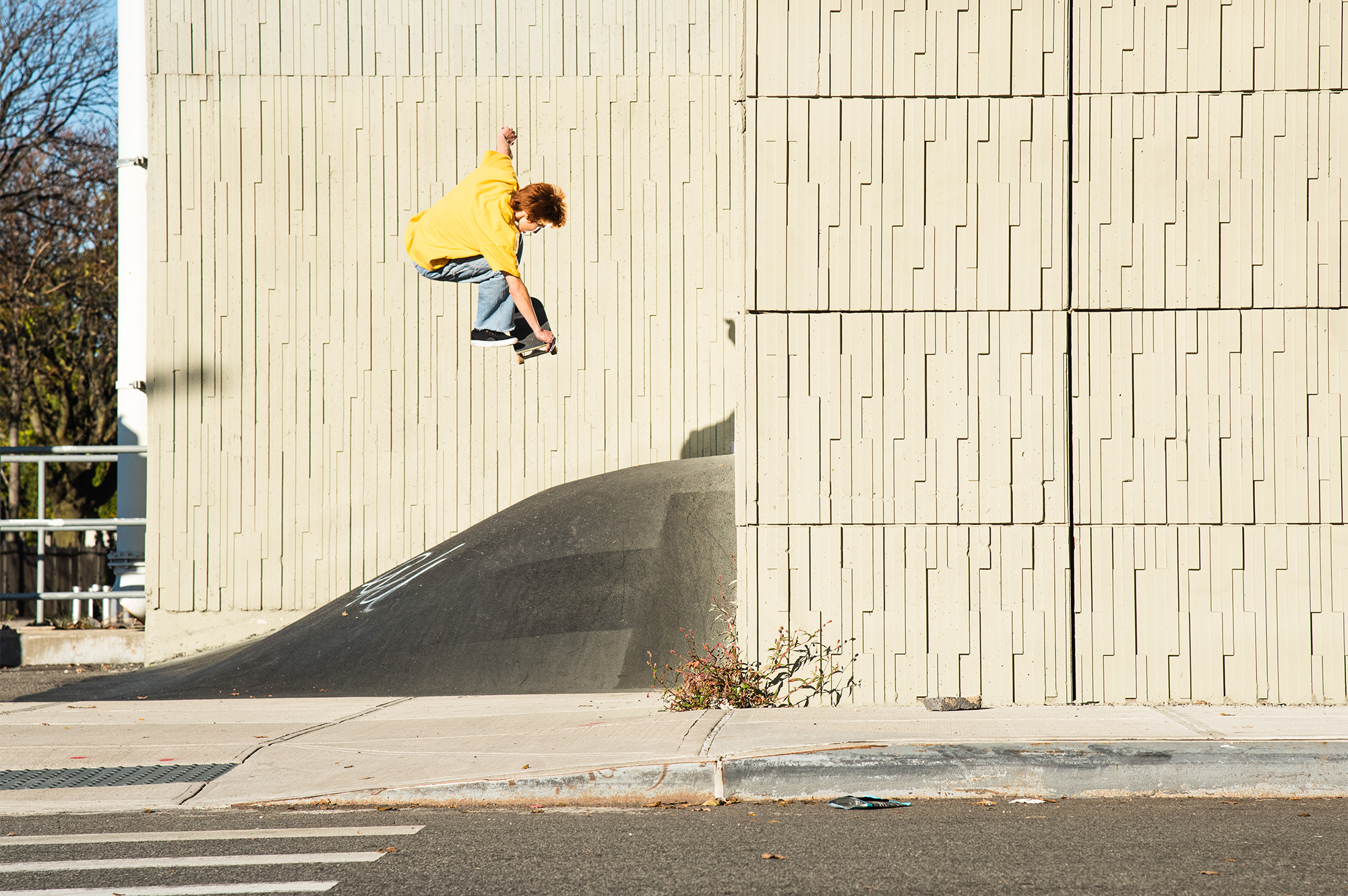 Are you supported by any distributions like NHS or Deluxe? How’d you get them in shops?
No, Slappy is not part of anything. It’s out of my garage. I’m going to the distros and asking them to sell the trucks, and when they are all out, I’ll make another batch when people want more. It’s not like I’m doing sales and answering calls. I’m getting back to everybody on emails and Instagram if they have any questions about where to get them.

So far, I gave pairs to Steve Douglas because he knows all the distros in Europe and around the world. Then I gave some pairs to a bunch of friends and people I knew like Ryan Hamburg, who is also on the team now, and some shops and distros over here in The States.

I went to some accounts myself and was like, “Hey, I’m doing this. What do you think?” and they were like, “Hey Mike. Worst time to start a brand.” I’m like, “Yeah. I know. But it’s the best time to not give a fuck.” I’m just putting it out there with low expectations. I know the product is good because I spent so much time on it.

Do you think if your brand becomes too successful that Independent or Thunder will make you “disappear”?
Jump me in, don’t kill me, fellas. 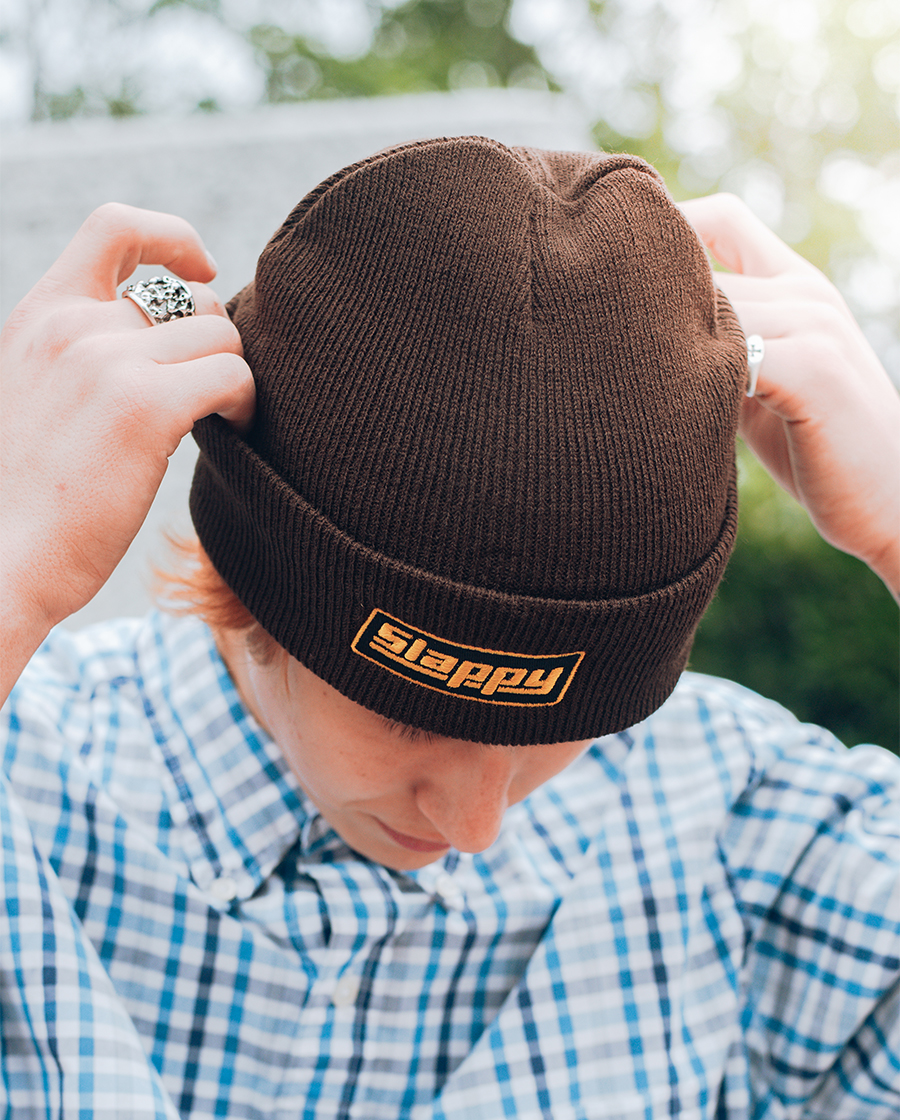 Is there a distinguishing feature that makes Slappy different, or just the logo on a combination of other trucks?
If you hold a pair, you can see the influences in the model, but it’s a totally original truck. It’s not a copy of another truck. I tweaked everything and one big function I wanted to focus on was having them turn differently from the big brands out there.

The other thing is the clearance on the kingpin. That was the number one thing that I wanted to have right. Every truck over the years would snag and you just hear [squeaks] like it’s stuck on that kingpin. It drove me crazy.

The trucks with inverted kingpins are crazy low, and the ones with normal kingpins have major clearance, too. We’ll see what people think of them but all I can say is try them out, if you like them, hell yeah stoked. If you don’t like it, there are a bunch of other trucks out there, try them all out [laughs].

Would you ever consider becoming a kooky Youtube personality to try and sell more trucks?
I say dumb stuff all the time, put a camera on me and we are going out of business in record time. Plus looking at myself and acting all excited just seems weird for me to do. I could never be as excited as those YouTubers are.

I’ve heard Nyjah skates tight trucks, why do you think that is?
I’m going on a limb here but I’m guessing you have to be so precise with the life or death situations he puts himself in on a skateboard. I would recommend cranking ’em down too [laughs].

Did you have truck nerd @fuckwithyourtrucks test them out?
No, but we started talking recently and I was like, “Hey. I want to send you a pair, I want you to fuck with them.” He said he’s down, so I got a pair going out to him soon.

This kid from North Carolina, Nick Kirch got an early pair and he started testing them. He’s also the first person on the team. The best feedback he gave me was like, “Dude, I jumped off everything I could find trying to break them and my board got run over by a full-sized truck and they still work. I can’t break them and they turn super good.”

The only “scientific” person I hit was Paul Schmitt. I gave him a set of 9-inch ones. He set them up and gave me great feedback. I have him working on some comparison specs for me. He is the professor and will nerd out more than anyone. I love Paul.

Random one but do you think those little slide plates on Tensors back in the day actually did anything?
I never tried a pair but I hear good things about the Magnesium Tensors. 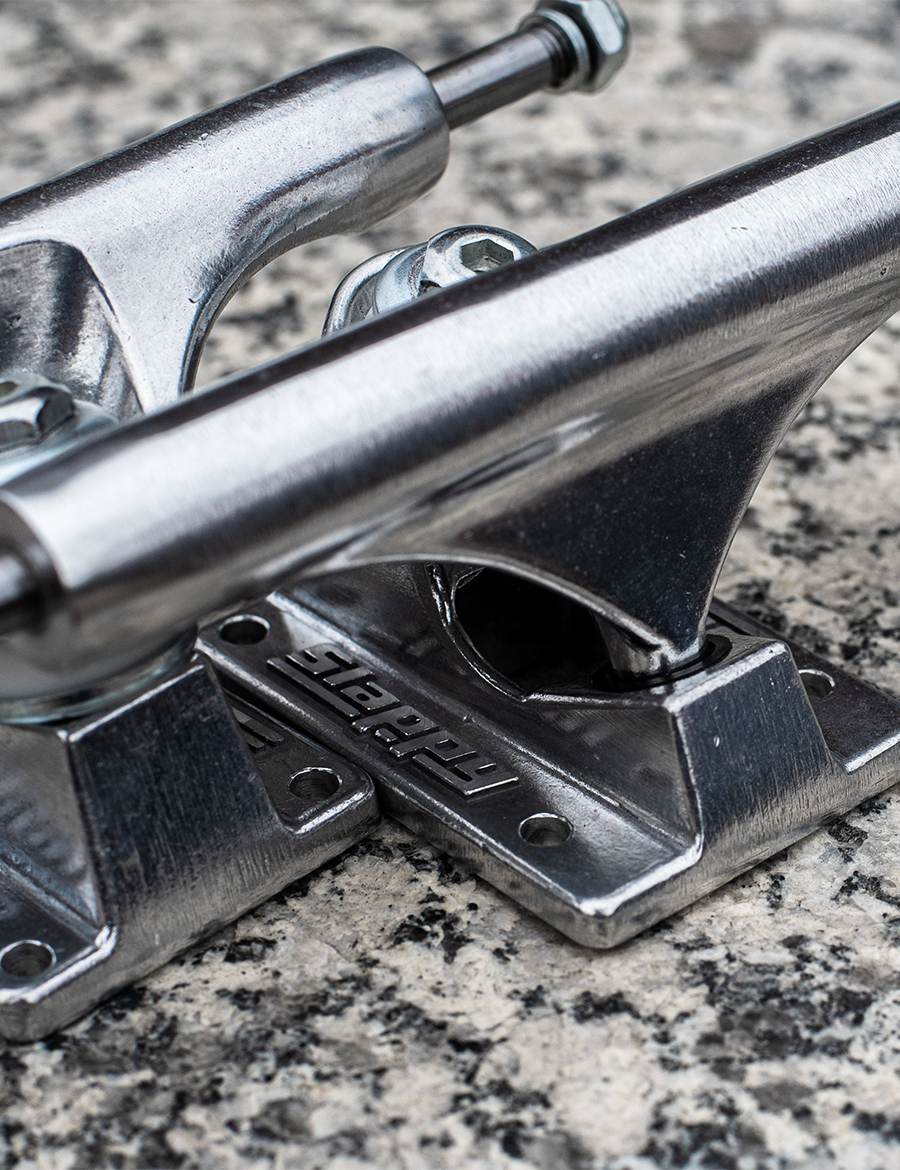 If there was one other part of a skateboard that you could make what would it be?
If I could figure out how to make a better bearing than Bones Swiss, that’d be the goal. But I ain’t doing that. I don’t work for Bones Swiss, so this isn’t a promo – in my opinion, everybody else’s bearings are close, but you could have bought 17 sets of some random brand bearings and your Swiss are still going outlast them all.

I’ll tell you a funny Swiss story. I was in California and I was in between places, and I didn’t want to feel like a mooch, but I was dead broke. I remember asking a friend of mine if he had any bearings because I was trying to set up a new board. He’s like, “Yeah, I got some. Come on by.” In my head, I’m like, “Oh. He’s got some Swiss. I’m going to have a good day of skating.” I went to his house, and he put Bones Swiss on his board, and then he’s like, “I got these for you.” I don’t want to tell you the brand but he handed me some purple bearings [laughs].

I put the purple bearings on and it fucked with me so badly, I drove back home across country. That was my tipping point. If I’m at the point where I’m bumming bearings off people, and they’re going to hit me with some purple bearings, I need to get my shit straight. I can’t be out here riding purple bearings. My board is trash. I need to go home. I’ve got to reset.”

After years of working in the skate industry, and now starting a truck company, do you have a fetish for losing money?
Our fetishes are very similar — a skate magazine and a truck company. There is no good outcome here, let’s just enjoy it while we can.