“A Rock Star’s Next Act: Making Montana a Skateboarding Oasis” by Jim Robbins via The New York Times 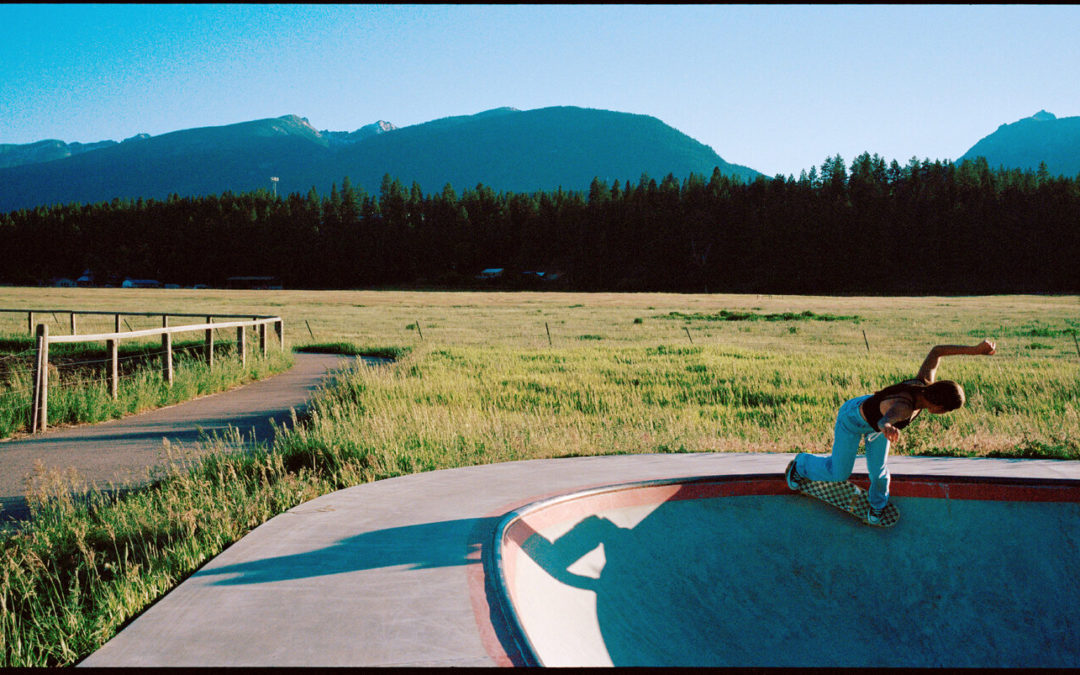 BROWNING, Mont. — This is not the Montana where the wealthy are building ski-in and ski-out mansions or refurbishing a trout stream on a new ranch.

Browning is the capital of the Blackfeet Nation, where the rolling, grass-covered high plains collide with a steel-gray wall of snow-dappled mountains on the Rocky Mountain Front just south of the Canadian border.

This is also a new capital of world-class skateboarding, and a nearly 13,000-square-foot, $300,000 skate park called Thunder Park. It was paid for by the Montana Pool Service — a name in reference to the large bowl at the center of a skate park — a foundation funded and operated by Jeff Ament.

Yes, that Jeff Ament — the bass guitarist and a founder of Pearl Jam. He’s seven years into his self-appointed mission to bring high-end skate parks to every city and town in Montana that will have one.

Ament has paid for, or helped pay for, 27 skate parks, most of them in Montana. He has also helped build three on the Pine Ridge Indian Reservation in South Dakota. Three more are planned for reservations in Montana and South Dakota, including one at Wounded Knee.

“You are teaching kids to get up when they fall.”

“If you are in an isolated rural area or you come from a broken home you are going to fall a lot.”

A clue to his skateboard philanthropy is found in the angsty and melancholic lyrics of Pearl Jam’s music. “I gotta bomb in my temple that is gonna explode,” the band sang in the song “Once,” on their multiplatinum debut album, “Ten.” “I got a sixteen-gauge buried under my clothes.”

While that may be a bit of grunge rock theater, Ament weathered his own emotional storms, he said, with the help of a backyard skateboard ramp in a small and remote Montana town called Big Sandy, where he grew up. Skateboarding, he says from personal experience, is deeply therapeutic for disaffected youth in similar places.

Montana’s sublime mountain and prairie landscapes and recent popularization in shows like “Yellowstone” obscure the fact that in 2019 it had the third-highest suicide rate in the country, 27 per 100,000 people — a rate that is even higher on reservations at 31 per 100,000.

Ament, 58, not only gives money to make these skate parks happen, but tends to them. He lives in Missoula, with a pool in his backyard, not far from the constellation of Montana parks he’s been instrumental in building and maintaining.

It takes time, something that was unexpectedly gained during the pandemic when Pearl Jam canceled much of its touring. Ament and his wife, Pandora Andre-Beatty, are basically the entirety of the organization, though they have plenty of volunteer help.

On a recent loop of several Ament-inspired skate parks in his customized white Sprinter van, taking a journey he makes several times a year, he showed up with a broom and dustpan to sweep out the bottom of the pool at Thunder Park. He scrubbed the walls during a graffiti cleanup in Havre, did more sweeping in Shelby, and talked about the vital role of the plumbers’ mission.

“The great thing about skateboarding is you don’t have to belong to a club or pay a fee,” Ament said.

“You just have to be sure the drains aren’t getting plugged, that’s the main thing.”

The parks, like this one in Shelby, Mont., have attracted skateboarders from across the country.

Growing up in Big Sandy, with fewer than 600 people, Ament said, the highlight was dinner at the nearest Dairy Queen, a half an hour away. His father was the Big Sandy barber, drove a school bus and raised chickens, pigs and cows.

Rural Montana towns are often big on team sports, particularly basketball and football, even when the towns are so small they can only field six-man football teams. Ament was a standout in multiple sports, and was offered a scholarship as an all-state linebacker. But there is always a subset of young people who aren’t cut out for team sports, and are in need of another outlet.

Ament grew up near the Rocky Boy’s reservation and knows second-hand the extra difficulty of life on a reservation. Skateboarding, and going to skate parks, “gives kids a reason to see the rest of the state, the rest of the country and possibly the rest of the world,” he said. “There’s an old-school mentality that says you are giving up on your community if you leave and go to college somewhere else.” He shook his head.

“My life would be way different without this park,” said J.C. Larson, a rangy 18-year-old, as he held his board and watched a herd of horses gallop by on a nearby road. “It would not be good. I wasn’t into sports, and I met all of these guys skating.”

Scrapes and bruises don’t slow anyone down in Bozeman.

They can get lessons from teachers like Kim Petersen, below left, practicing in Hamilton.

And they can practice by themselves on their own schedules, like at this park in Livingston.

Ament has no entourage and there is little fuss when he pulls up to these parks. He’s low-key and straightforward, dressed in a white T-shirt, shorts and his Montana Pool Service hat as he hands out new wheels, hex wrenches, hats, stickers and an occasional skateboard to the dozen or so kids who hang there.

Just a few fans want their board or hat signed. A little boy in Shelby, Mont., asked for autographs on his cast. Kids call out “Hi Jeff,” and one cries “I love you Jeff.” Ament grins and jokes, “I paid him to say that.”

The attention he provides is low-key too, sometimes just listening to someone talk about personal struggles. “I do my best at trying to be a worried uncle, rather than a curmudgeonly old guy,” he said, pausing, realizing the significance of his role. “I’ve lost four really good friends to suicide.”

“Instead of you against the world it’s you against your skateboard and it gives you a place to take out your aggression,” said Kim Petersen, a longtime ally of Ament’s, who was holding a clinic with “Girls on Shred” for female, transgender and nonbinary skateboarders in the small town of Hamilton.

Boarding can also open minds, she said. “People come from all over the world to skate here and if you’re a kid, you are going to see some amazing stuff.” Not the least of which is gender nonconformity. “In these towns they need to open their eyes and accept.”

“Skateboarding has been on the fringe, for the fringe, and it helps you get through tough times,” Petersen said.

“It opens up one more place for kids to find their power.”

Larson, below center, and other residents skated the new park in Browning.

Ament has worked with three skate park builders — Evergreen, Dreamland, and Grindline — to transform Montana into an unlikely skateboarding destination. “We have more world class concrete per capita in Montana than anywhere,” Ament says.

The skate parks happen in different ways and for each Ament puts in different amounts. He might donate $50,000 and then match up to another $100,000. Or just pay for the whole thing out of pocket, like he did for Thunder Park.

“We had a big tour year and we had a bunch of money in the band foundation and I just put all that money in the Browning skate park,” he said. “There was a crying need — it’s a big reservation and it’s super isolated.”

Evergreen, which specializes in what are known as lunar, or moonscape-style parks, had so much business building skate parks here that it moved its headquarters to the Bitterroot Valley in southwestern Montana. “Building skate parks here can be very challenging,” said Catherin Coulon, an owner of Evergreen. “Some of the jobs we do in Montana are so rural you don’t have cell service and concrete is two hours away.”

To honor Ament’s thrasher philanthropy, Blackfeet Chief Earl Old Person bestowed him with a Blackfeet name, which translates to Holds Water. He compared Ament to the beaver, an animal the Blackfeet hold in high esteem, “because the beaver builds dams that create ponds that allow other creatures to flourish.”

And flourish they have. “We showed up there late one night and there were 50 kids there skating, including 10 girls who were doing an outside loop on the park.”

“You are going to fall hundreds of times.”

“To see those girls doing that and understanding how much they had to be to get where they were, I felt like a proud father.”