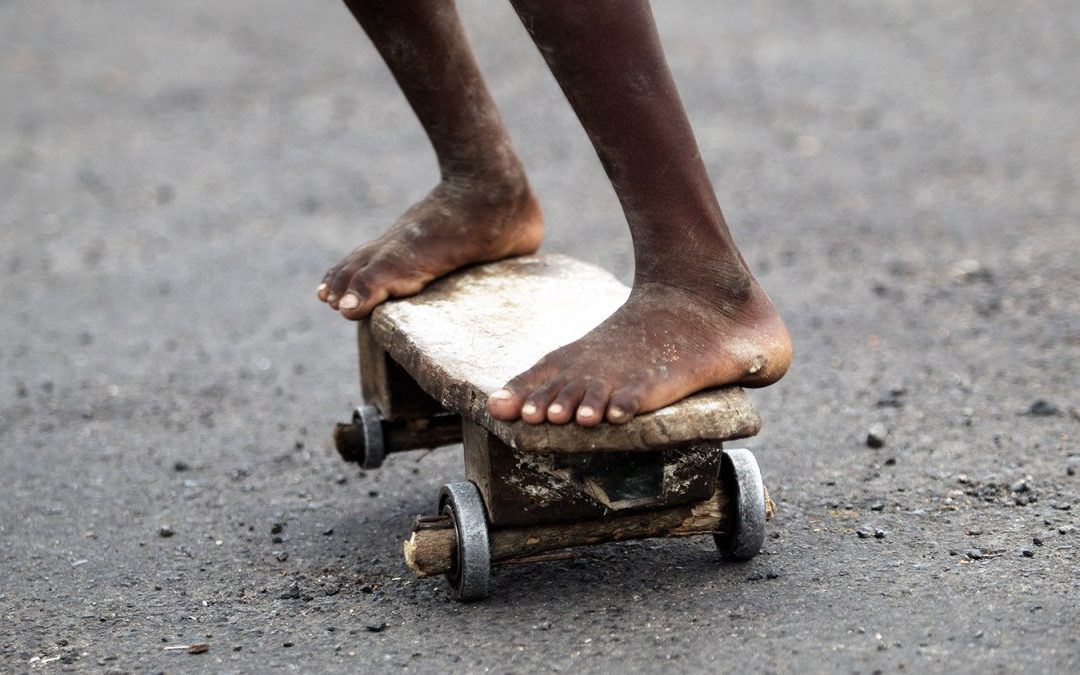 Last week, an image of some barefooted kids riding on very primitive looking, makeshift skateboards went viral across the skate “social-verse”. It instantly put a smile on your face like, “Yes! This is amazing. And where is this from?” The picture captured the raw and pure innocence of these kids’ ingenuity for homemade skateboards, and the stoke on their faces was something that we all could relate to. Fortunately, we were able to touch base with South African photographer Greg Ewing about his amazing photo and get some background on this crew of skaters that live off the Western Coast of Africa.

Hey Greg thanks for taking the time, can you give me a little background on you and your photography?
I’m a bit of an old school South African based surf and travel photographer, been doing it for over 20 years. I grew up in Cape Town and then moved to Durban to work at our local surf magazine Zigzag where I was staff photographer for many years and then Photo Editor. These days I’ve gotten into printing and I own and run an online Ocean Art Gallery called Ocean Collective where I print and sell local surf photographers’ work.

“These images are very personal to me and it’s special to see them getting new life and hopefully doing good.”

The image that sparked off a sharing frenzy in the skate social media world is actually a few years old. Can you talk about how you got that image and story behind the trip?
Most of my trips, if not all, were inspired by a story of waves or a picture I had seen. If you googled São Tomé surfing a few years ago, not much came up beside one or two images by legendary surf explorer John Callahan. There was one that stuck in my mind of a spot called Radiation Point, named after the large radio antennas nearby. And the story was you could feel the radio waves in the water when you surfed… we didn’t quite feel it. I‘d dreamed of going to São Tomé most of my career, and eventually in 2016, I got Monster Energy to back a trip there with two of their riders.

“We were honestly blown away at the kid’s ingenuity and resourcefulness.”

Had you ever seen anything like these kids’ homemade skateboards before on any other trips?
I’ve been fortunate to have traveled quite a bit through Africa and other parts of the world and have never seen this before. I’ve seen and heard of kids on wooden surfboards, I guess that’s the origin of surfing waves, but not this kind of thing with skateboards. We were honestly blown away at the kid’s ingenuity and resourcefulness. Just on a side note and you can see in the one image, the kids would constantly be lubing up their wheels with what looked like a bottle of engine oil.

“The kids would constantly be lubing up their wheels with what looked like a bottle of engine oil.”

Do the kids featured in your photos surf as well as skate?
Some of the kids did surf and joined us in the water at Radiation Point which is actually where the skating images were taken. It seemed the younger kids skated, and then the slightly older kids surfed. There is a little surf scene there and little crews. There are two main spots, Radiation Point and Santana and each spot has a crew. There are rivals in a way. The Santana crew would all hike to Radiation Point and go surf there for the day and visa-versa. What’s interesting about the surfing side is they make their own wooden surfboards as well.

The world is in such a crazy place right now and needs all the positive stories it can find. These images definitely put a smile on everyone’s faces that sees them for the first time. Did you ever imagine that years after taking these photos they would gain new life?
Once I got over the personal side of the image being shared originally without my consent or proper credit on other outlets, which I think every photographer struggles with, and I saw the bigger picture and read the comments, it did warm my heart. These images are very personal to me and it’s special to see them getting new life and hopefully doing good. And to add, if some good does come and lives can be changed for the better we can also learn from them that something so raw can also give so much happiness. It’s something I’ve taken out of my travels in Africa. I have kids of my own and it’s a real thing this battle of phones and screen time and wanting them to just get out there and enjoy themselves.

Obviously, everyone that sees these pictures wants to help hook up these kids with real skateboards. Do you know of the best way or best contacts in that area for brands or individuals to send boards?
I want to answer this carefully, as when we were there, there were stories of Westerners sending surfboards over to help the kids, but they got into the wrong hands and that person was selling them. Our surfers gave boards to guys, but it’s always a tricky thing, who to give to, and will they share. Also, I can’t say with certainty that sending skateboards to the Santana Surf Club will get back to the skaters at Radiation Point. I met a few people there and still have their contacts and will have to follow up on that.

Thank you so much Greg! We will be looking out for your follow up on donations and will update this page accordingly. In the meantime, check out this video of the kids building their skateboards via The Santana SURF School Facebook page.

We love Transworld Skateboarding, be sure to click the link for intelligent articles and ripping skateboarding: https://skateboarding.transworld.net/