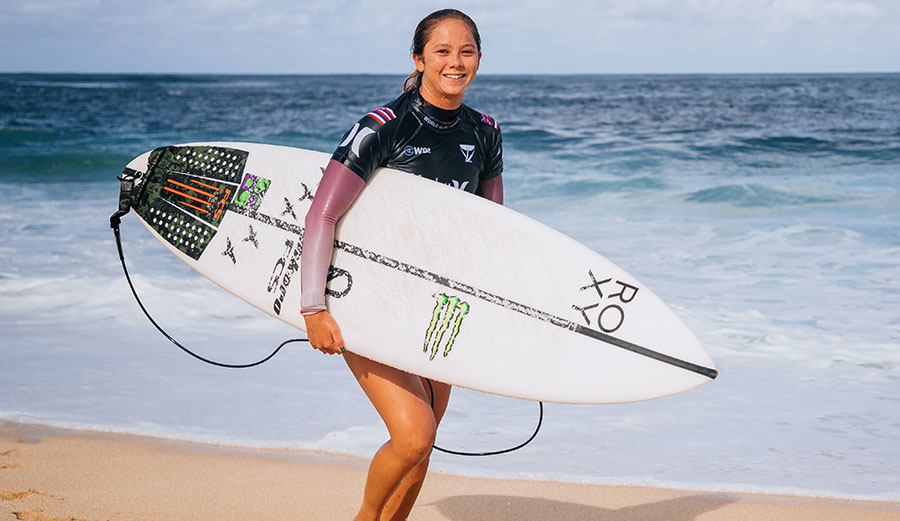 Bettylou Sakura Johnson definitely has all the tools to compete at the highest level. Photo: Tony Heff//WSL

Bettylou Sakura Johnson’s huge win at the Haleiwa Challenger before the New Year may seem like it came out of left field, but in a lot of ways, it was a long time coming. Born and bred on Oahu’s North Shore, Sakura Johnson has been surfing waves along the Seven-Mile Miracle since she was just six.

In addition to local junior surf competitions throughout her youth, Sakura Johnson has competed as a serious gymnast and regularly entered dirt-bike races. When she was ten, the Haleiwa native signed with Roxy and decided to dial in her athletic focus on surfing.

When Sakura Johnson was 14, she began competing in QS events, ready to qualify for the World Surf League’s Championship Tour. In December of 2021, at age 16, Sakura Johnson’s training paid off. She took down five-time world champ and Olympic gold medalist Carissa Moore to win the Haleiwa Challenger. In doing so, she secured a spot on the 2022 CT, becoming the youngest woman on the tour.

“I really don’t have words to describe it, it was so special,” Sakura Johnson told me. “The weather was horrible but my whole support crew was there on the beach standing in the rain — I’m so blessed to have them behind me and everyone from Haleiwa.”

Although Sakura Johnson had always dreamed of qualifying, her plan was to finish high school and then start traveling the world. But as many can attest, life doesn’t always go according to plan — sometimes you just have to roll with it.

“It happened so fast,” says Sakura Johnson. “I’m just going with the flow and making the best of it. I’m doing it now and hopefully it’s showing the next generation that they can do it as well — you should never not push your limits.”

Sakura Johnson attributes a lot of her surfing success to her North Shore roots. Growing up, she spent loads of time in the water with the boys, which helped push her surfing. She says her home and her community helped shape her as a person, both on land and in the water. 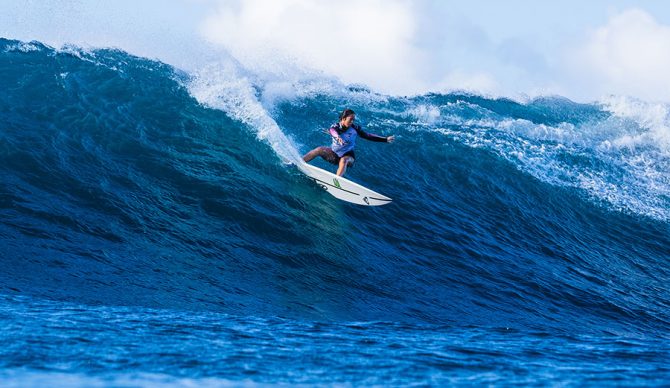 Rail work like this will take you place. BSJ, at Sunset. Photo: Tony Heff//WSL

With her debut CT season kicking off, Sakura Johnson is ready to face off with the best in the world (she’s matched up with Brisa Hennessy in the semis at Sunset). She’s excited to travel to new places, surf new waves, and learn about new cultures. More than anything, she’s ready to learn from her fellow competitors and soak up all the knowledge they have to offer.

Sakura Johnson has always admired Bethany Hamilton. Hamilton, of course, charges supremely hard, despite famously only having one arm, and is constantly positive and supportive of her fellow competitors. Sakura Johnson also has a lot of respect for Stephanie Gilmore and her ability to win and lose with grace.

“One of the hardest things to do as an athlete is having a good face when you lose,” says Sakura Johnson. “I think to be a good winner you must be a good loser because you’re going to lose more than you win. Steph really shows a great ideal of how to do that.”

Sakura Johnson is grateful to have kicked things off at home, with waves she’s familiar with and her family and friends on the beach. Her goal for her rookie season is to win a CT event and rookie of the year. But, with a stacked rookie lineup, she knows it’s going to be tough. In the long run, Sakura Johnson dreams of having a couple of world titles and hopes to someday compete in the Olympics.

“Ultimately, I just want to learn a bunch,” says Sakura Johnson. “I want to learn to be an amazing competitor and all the techniques and strategies it takes to win a contest.”

Bettylou Sakura Johnson. It’s a good name to remember — you’ll likely be hearing it for years to come.