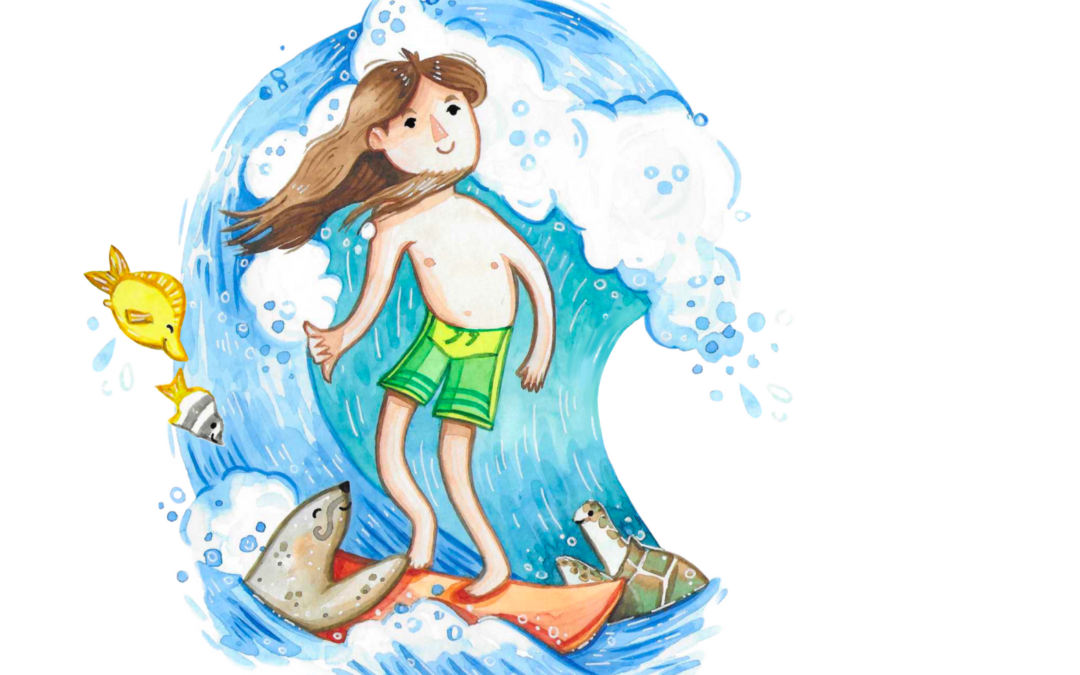 A surfer at heart, Mr. Dude is someone who – like so many of us, unfortunately – never put a whole lot of thought into the ways that his decisions and behaviors affected the environment around him. He used plastic straws, he guzzled one bottled water after another, and he carried things around in plastic bags. A local surf hero, he was content not to know the effect that he was having on the ocean that was so dear to his heart. It was not something that he did out of meanness or malice: rather, he lacked any real intentions. He did what he did thoughtlessly.

In this book, Mr. Dude is in for an awakening – rude, important, and life-changing. The Radical Undersea Journey of Mr. Dude is a children’s picture book that tells the tale, beginning with the local surf hero’s eco-unfriendly exploits and leading into the momentous day on which he finds himself transformed into a fish. As a fish, Mr. Dude sees firsthand just how tremendous is the destruction he has sewn. A fun and impactful adventure, this is one that I am confident will inspire loving hearts and real action, encouraging the next generation to do what is right for our planet by cultivating a sense of awareness and responsibility with regards to our roles in the world. – Vipe Desai (the Author)

A portion of the proceeds from the book will benefit Vote The Ocean!

Board Specialty Retail Shops can order books by emailing: donate@votetheocean.org

Recently, I checked my mailbox and found an envelope containing an autographed copy of “The Radical Undersea Journey of Mr. Dude”. I have known the author Vipe Desai, who is a brand strategist, philanthropist, former surf shop owner and all around brilliant industry guy (learn more About Vipe below), for a number of years so I knew a little about this epic little book, but underestimated its impact.

Soon after receiving it, I sat down and read it with my three and a half year old daughter, Winona. She and I both loved the illustrations (by Ashley Casalino) and felt that they conveyed the message very well graphically. The fact that Mr. Dude was so oblivious to the adverse effects of discarded plastic, tires and other toxic materials on sea life, was not completely surprising as it is a subject that is easily overlooked. Despite the fact that there were only two named characters in the book, the character development including a green sea turtle, starfish, a sunfish, a sea lion with a mustache, a lobster and a shark (named Hugh) was rather robust and colorful. The settings and descriptions were very much on point as well.

Bringing this important environmentally impactful subject to light using the well crafted and kid friendly words that Vipe utilized in this captivating children’s book produced something very relevant and special. After reading this outstanding story twice in a row to my daughter, she asked me to read it again then again then again one more time for a total of five times before her attention was pulled back to her Paw Patrol Magnet set.

Vipe is what you would call a brand strategist with a purpose and he creates winning strategies in the boardroom.

In addition to being an award-winning executive and philanthropist, Vipe looks for ways to apply more than 3 decades of experience in creating disruptive brands and growth strategies for nonprofits and emerging businesses. Currently, he is serving as a nonprofit Board Member for Vote The Ocean, Ocean Institute, and Skateistan, and is serving as a corporate board director for Brix REIT, Inc and Elevate.Money – both SEC reporting companies.

Vipe is also an advisor for AltaSea at the Port of Los Angeles, a cutting edge 400,000 square-foot campus that convenes and nurtures the best and brightest pioneers and organizations in science, business, and education for ocean conservation.

He kicked off my career in the early ’90s when Vipe bought a surf shop and created the H2O Winter Classic, a two-day surf and snowboard competition with a concert that went on to inspire the creation of the Warped Tour and X Games. In the late ’90s, he helped create and launch Red Bull’s marketing strategy in the U.S. Since then, he has been called up by numerous brands, boards, CEO’s and political campaigns to advise on branding, marketing, and turn-around strategies that included creating a collaboration for Partnership for a Healthier America chaired by First Lady Michelle Obama.

Today, Vipe is focusing on ensuring that future generations are met with a healthy and thriving ocean. He finds himself involved with several ventures focused around innovations and solutions that will reduce plastic waste and minimize business’s impact on the planet.

Vipe is a concerned member of the coastal business community and a founding member of the Business Alliance for Protecting the Pacific Coast that represents 7,500+ businesses from California, Oregon, and Washington. As a result, he was invited by Congressman Alan Lowenthal to testify before members of Congress on the harms of new offshore oil and gas drilling. Vipe has been presented with three Certificates of Special Congressional Recognition from Congressman’s Harley Rouda, Mike Levin and Alan Lowenthal on the efforts of BAPPC to protect our ocean and coastal economies.

In 2010, the City of Los Angeles and former Mayor Antonio Villaraigoso presented Vipe with a Certificate of Appreciation for his commitment to improve the lives of youth.

As a way to help others propel their careers, Vipe launched the Army of Gamechangers podcast where he interviews executives who share their best career and leadership advice.