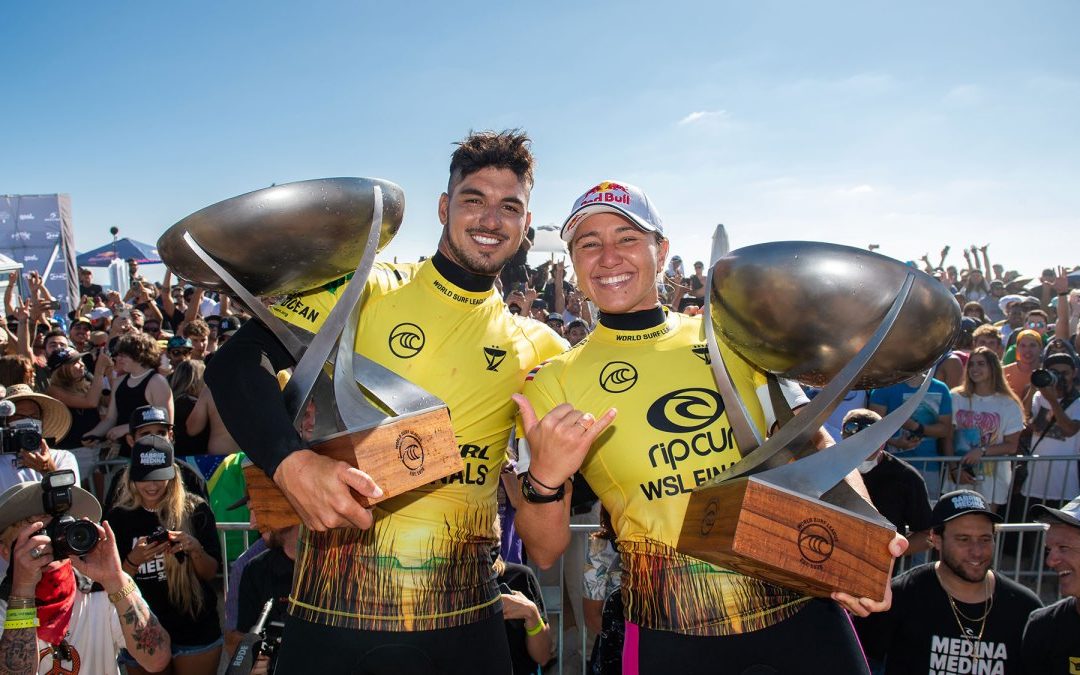 After a historic day of competitive surfing at Lower Trestles yesterday, Carissa Moore and Gabriel Medina are officially your 2021 World Champions. The Rip Curl WSL Finals offered a new format to decide the final World No. 1s–and thanks to pumping conditions, it kept surf fans on their seats throughout each and every heat.

To watch all of the day’s highlights, hit play above. And to read a full recap of Moore and Medina’s victories, continue reading the WSL’s presser below:

Medina and Moore both entered the Rip Curl WSL Finals as World No.1, which gave them the advantage of a place in the best-of-three Title Match where the first surfer to win two out of three heats becomes the undisputed 2021 World Champion.

Carissa Moore Wins 5th World Title
Moore came into the event as the reigning WSL Champion, World No. 1 and Olympic gold medallist and her victory marks the first time in her career that she has claimed back-to-back World Titles. Moore has been the most consistent surfer on Tour this season and is the only person to reach the Semifinals or better in all seven events. The five-time World Champion has finished 3rd or better at every CT event since the 2019 Margaret River Pro and 2021 marks the 10th consecutive season that Moore has won more than 20 heats, the longest streak in WSL history. Moore sits behind 11X World Champion Kelly Slater (USA), and 7X World Champions Stephanie Gilmore (AUS) and Layne Beachley in the record books for most world titles.

“It was a long year and it was a very long day,” said Moore. “Today didn’t start as I expected, I had to fight my way back so it made it a bit sweeter to win. I was about to have a meltdown after the first heat. I tried my best, surfed from my heart, and it worked out. I’ve never been in the water when winning a world title, so this is extra special. I couldn’t ask for anything more!”

Gabriel Medina Clinches Third World Title
Medina’s win today sees him join surfers such as Tom Curren, Andy Irons and Mick Fanning with three World Titles. With 16 WSL Championship Tour (CT) event wins and 29 Final appearances under his belt, Medina is one of the most experienced surfers when it comes to producing the best surfing under pressure. This season, Medina had the best start in his career, reaching the Final in the opening three events on the men’s CT. He gained a significant lead over the rest of the field when he won the Rip Curl Narrabeen Classic presented by Corona and the Rip Curl Rottnest Search presented by Corona, his first event wins in Australia since the Quiksilver Pro Gold Coast in 2014. Since winning his first World Title in 2014, Medina has finished in the top 5 every year, including his second World Title in 2018.

“This was my biggest goal in surfing,” said Medina. “It’s not everyday you accomplish your dream. This is a special day for me, it’s a day I’ll remember forever and tell my kids about. This year was very intense and mentally challenging, I had to work hard, have patience and let my surf talk. I had to surf a lot to win this title!”

WSL Final 5 Put on a Show With Solid Conditions at Lower Trestles
Seven-time WSL Champion Stephanie Gilmore (AUS) had the opening ride of the historic Rip Curl WSL Finals but was defeated by Johanne Defay (FRA) in Match 1. Defay then advanced on to Match 2 where she was eliminated by Sally Fitzgibbons (AUS).

“I feel super happy to be here today,” said Defay. “This is already the best result of my whole career, so I’m just focused on surfing Lowers one more time and see where the day will take me.”

Rookie of the Year, Morgan Cibilic (AUS) had his Title shot against Conner Coffin (USA) in men’s Match 1. Cibilic had a good run at it, but Coffin’s rail work and power were simply too much to handle. Coffin advanced to Match 2 against Filipe Toledo (BRA), and the Brazilian started the Match by dropping the first air maneuver of the day. With a combined score of 16.57 (out of a possible 20), Toledo advanced to Match 3 where he faced fellow Brazilian, Olympic gold medalist and 2019 WSL Champion, Italo Ferreira (BRA). With the hope of winning his maiden World Title, Toledo came into Match 3 as the underdog, but delivered a dynamic performance and took the win against Ferreira.

“I feel ready to go and I’m super happy that my surfing is good today,” said Toledo. “I’ve been really working on the process of waiting for the perfect wave. I’ve been trying to be patient, choose right, and have the confidence to go for it.”

Tatiana Weston-Webb (BRA) entered the Title Match with plenty of momentum after winning women’s Match 3 against Fitzgibbons and won her opening heat against Moore. In the end though, Weston-Webb couldn’t match the 5X WSL Champion’s power and fell short of claiming her maiden World Title, finishing the season as World No. 2.

For highlights from the Rip Curl WSL Finals and the 2021 Championship Tour, please visit WorldSurfLeague.com.