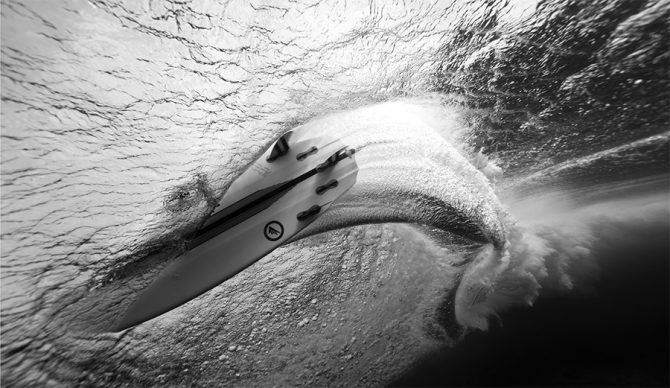 Under the talented feet of Kelly Slater, the advantages of a board constructed primarily of expanded polystyrene foam become abundantly clear. Photo: Todd Glaser

Editor’s Note: Welcome to our new series, “By Design” with Sam George that examines the genius, and sometimes the mystery, of surfing’s storied design history. Sam has been writing about surfing for more than three decades and is the former Editor-in-Chief of SURFER magazine. He won an Emmy for his work on the 30 for 30 documentary, Hawaiian: The Legend of Eddie Aikau. Today, Sam looks at the mid-length surfboard.

Surfers, as a whole, are not a very technically minded bunch. Perhaps the simplicity of riding a wave toward shore on watercraft that require no moving parts or mechanical assistance fosters a mindset that assiduously avoids technical examination of any kind. Most surfers choose to accept long-held theories and associated terms without question. Which is why we, alone among seafarers, use the term “offshore” to describe wind blowing from the land, regularly apply the measurement “head high” using only certain towering NBA centers for scale, and will assert with complete assuredness that a four-year-old, conventionally-constructed surfboard has become “waterlogged.”

A state of awareness that could explain why today so many surfers, and even surfboard manufacturers, describe the boards they’re making and riding as “epoxies,” when, in fact, these boards are built primarily from expanded polystyrene foam, a material that affects the board’s performance much more significantly than the resin used to laminate it. With this in mind, “epoxy” surfboards should more accurately be called “styrofoams.”

Modern surfboard construction history effectively begins with Gordon “Grubby” Clark, who working with pioneering manufacturer Hobie Alter in the late 1950s freed the sport from balsa wood and drawknives by adapting polyurethane foam for use in making molded surfboard blanks. Polyurethane, invented in the 1930s as an alternative to nylon, had by the 1950s been modified into expandable foam, used primarily for insulation and automotive interiors, more specifically dashboards. One characteristic that particularly intrigued Clark, however, was the foam’s closed-cell composition. Meaning that when crushed or torn, a liquid would only fill the damaged cell. Put simply: if dinged, a surfboard made from polyurethane foam would not absorb water. Big advantage over sponge-like balsa, not to mention the significant reduction in weight, with boards in the 1960s dropping from the previous 40 pounds down to approximately 25. Wrapped in multiple layers of six-ounce fiberglass cloth, laminated with polyester resin, reinforced by multiple wood stringers, these classic longboards were pretty much bomb-proof — which might explain why so many survived to go up on the block at contemporary vintage surfboard auctions. 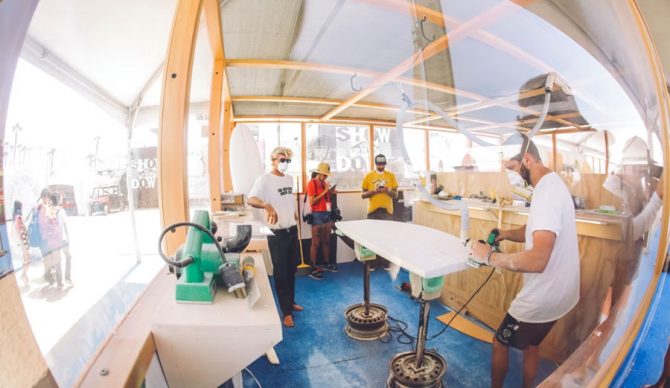 Unlike molded polyurethane, styrofoam surfboard blanks are initially hewn from a solid block of foam and then shaped to form (most often by a CNC machine first). Photo: Vans.

This whole method of manufacturing got tossed out the window during the late-1960s tumultuous “Shortboard Revolution,” when sub-eight-foot boards were suddenly expected to weigh as many pounds. This state of the art revealed the polyurethane blank’s prime weakness: relatively high weight in relation to its volume. In response, shaped blanks now had to be laminated with thin layers of four-oz. cloth, most commonly two on the deck and a single on the bottom, resulting in a light but extremely fragile structure that dented easily, dinged at the slightest touch, and, as more refined designs required a decrease in volume, began breaking with alarming regularity. Consider, for example, that in the 1960s surfers like Greg Noll and Eddie Aikau campaigned their entire North Shore season on a single surfboard, while less than 10 years later the carport of virtually every house from Log Cabins to V-Land was a veritable graveyard of broken boards.

Still, with only wooden boards as comparison, and no viable alternative material to choose from, surfers complacently accepted a relatively light, inherently weak surfboard as the status quo. Which is why the first whiff of a paradigm shift emerged not from the conventional surf scene, but from the fast-growing sport of windsurfing.

“The whole shift away from polyurethane/polyester materials started with sailboards in the late 1970s,” says Greg Loehr, the legendary East Coast surf champion and founder of Resin Research, widely acknowledged as one of the pioneers of modern alternative surfboard construction. “I was really getting into sailboarding, especially in the waves, and it right away became clear that to make a board strong enough to handle straps and a mast, polyurethane was too heavy. It had to be EPS.” 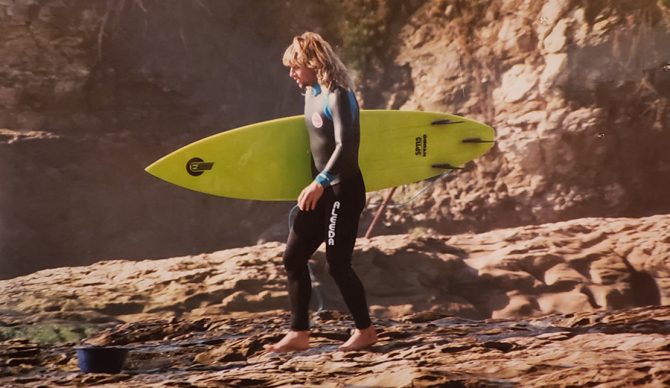 The author, shown here with an early styrofoam/epoxy board shaped and glassed by the late John Bradbury, circa 1986. (He’d rather not talk about the haircut.)

The EPS Loehr cites stands for “expanded polystyrene” foam, generically referred to as “styrofoam.” Also patented back in the 1930s and employed primarily as a thermal insulator, polystyrene differed from its cousin polyurethane in that it was formed by expanded beads rather than closed cells. The interstitial gaps between these beads, minute though they are, translate to less density in the foam’s mass, the result being significant weight reduction in relation to volume. Less weight: good. But that the gaps between beads are permeable by fluid, meaning essentially capable of absorbing water: bad. This didn’t stop the innovative Loehr from adapting styrofoam for use in surfboard construction.

“When you have a polystyrene blank with an average density of 1.8 pounds, as opposed to a polyurethane blank with an average density of 2.25 pounds, you can add so much more strength in the shell,” explains Loehr, who still has the knack for sounding more like a stoked surfer than the chemical expert he has become. “Not only do you get a stronger, lighter board, but with more layers of glass on the rail you’ve created a parabolic structure, unlike the conventional blank’s I-beam structure, which gives you way better flex integrity. Basically a better surfboard.”

So with its quantifiable advantages in weight, strength and flex, why didn’t the rest of the surfboard industry follow Loehr’s lead and make the switch to polystyrene blanks? Or did we forget to mention that polyester resin, the industry standard, happens to dissolve polystyrene foam upon contact? In any case, Loehr tackled that problem with a solution that eventually led to the somewhat misleading term currently in use in regards to “alternative” surfboard construction.

“Epoxy resin doesn’t dissolve polystyrene foam,” says Loehr. “Which is the primary reason we began using it in surfboard construction. But we quickly found it had other qualities.”

Yet another compound invented in the 1930s (a fruitful decade for future generations of surfers), epoxy was initially an adhesive used for dental fixtures. It was later developed into a resin whose durability and strong bond strength proved to be a real advantage, not only in casting objects, but also in coating structures. Couple this with its relatively low toxicity, lack of fumes and UV stability and you can see why, in Loehr’s view, epoxy was ideal for use in surfboard construction. A belief that could explain the over 40 years he’s spent at the sharp end of polystyrene/epoxy construction. 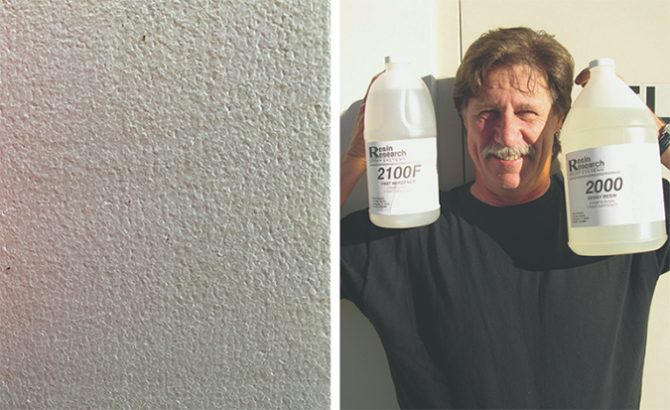 “Epoxy resins are stronger, more flexible and with much lower VOC emissions, they’re way safer to work with,” asserts Loehr. “But the polystyrene core really contributes more to the way a board rides, or, more importantly, how it feels. It will just ride differently than a board with a denser core, even at the same weight, because you’re moving less mass around. Think about how this would affect your board’s performance, especially when doing aerials.”

Which for most of us is…well, never. Yet today more and more surfers are finding styrofoam boards under their feet, as evidenced by the growing acceptance of EPS/epoxy, sandwich/composite models offered by companies like Firewire, who in particular provides a wide range of shortboard, mid-length and longboard labels designed and ridden by a fairly credible list of enthusiasts, including Kelly Slater, Kai Salas, Rob Machado and Taylor Jensen. Hardcore endorsements, to be sure, and more than enough reason to begin giving surfboard manufacturing’s most contemporary “soft core” its proper due.