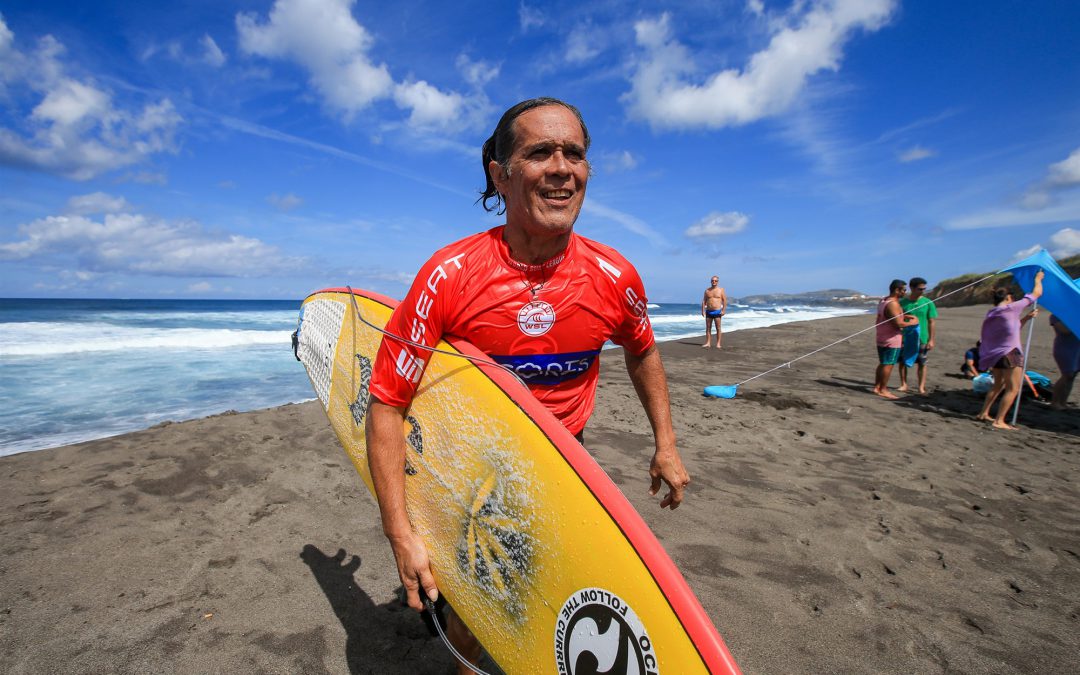 He belonged to a noted Hawaiian family that included brother Michael, also a top pro surfer, and second cousin Don, the entertainer.

The cause of death was not disclosed by the Honolulu medical examiner’s office. He was reported dead Friday.

Surf forecaster and news site Surfline reported Ho had a heart attack and slipped into a coma before his death.

The Surfing Heritage and Culture Center in San Clemente, California, posted a memorial on Facebook.

“Godspeed Derek Ho. Your presence and spirit at Pipeline will be missed,” the statement said. “The first Native Hawaiian man to be crowned world champion, your passion, drive and good nature inspired generations.”

The surfwear brand and Hawaiian locals’ organization Da Hui said on Facebook, “Mahalo for all the Many Classic Moments. Ride On.”

Ho became the first Hawaiian man to win the world tour’s championship late in his career, in 1993. Among those he beat out for the title was Kelly Slater, the winningest surfer in the sport’s history, and past champion Martin Potter.

He also won the Pipeline Masters and Hawaii’s Triple Crown of surfing, which includes the Masters, and big-wave contests at Haleiwa and Sunset Beach multiple times.

According to the Encyclopedia of Surfing, Ho was a second cousin to entertainer Don Ho. Derek Ho’s brother, Michael, is a two-time Triple Crown winner who has been described as the godfather of Hawaii’s North Shore, the center of professional surfing.

Derek Ho was a goofyfoot surfer, meaning he surfed left-handed, with his right foot in front. He was known as an “enforcer” for Hawaiian locals on the North Shore who sought to teach traveling wave riders respect and order.

Surfer Kala Alexander said on Instagram, “The man. The myth. The legend. Our hero.”

For a constant stream of informative Global News, click on: https://www.nbcnews.com/

The stylish goofyfoot leaves behind a legacy of incredible Pipe feats and a community of friends and loved ones on the North Shore. Ho became a standout at Pipeline as a teenager, alongside his older brother Michael Ho, and by his early 20s, he had already charged his way to a Pipe Masters win. At 29, he became Hawaii’s first male world champ and solidified himself as one of the most talented and respected surfers along the Seven Mile Miracle. Up until this last winter, Ho was regularly seen packing some of the heaviest waves during the season’s best swells.

“…Ho was quick-footed, with a sharp, angular, slightly formulated attack,” writes Matt Warshaw in the “Encyclopedia of Surfing“. “Tuberiding was his strength, and in hollow waves, especially at Pipeline, he rode with sublime precision and elegance. Two-time world champion Tom Carroll was Ho’s equal at Pipeline, but the Australian’s approach was rougher and more power-driven, whereas Ho time and again drew perfect lines through the deepest part of the wave—updating the approach invented by ’70s Pipeline ace Gerry Lopez.”

Ho was Hawaii’s first world champion, a 4-time Triple Crown champ, and a 2-time Pipeline Master. Surfing achievements don’t come any more prestigious than that. In addition to such incredible achievements, Ho will be remembered for much more than his success in a jersey. He’ll be remembered for his big smile, his infectious energy, his colorful stories, his mentoring of multiple generations, and maybe most importantly, his prowess at Pipeline for more than three decades.

Since the news of Ho’s passing, the surf community has taken to social media to pay tribute to Ho and his family. We’ve compiled some of them below.

Kalani Chapman: “I’m going to miss sitting at second reef looking over and seeing you in your spot hunting down the most beautiful barrels ever. I know you’ll be right there guiding us with all the other angels now. I will always cherish the memories and wisdom you shared with me. Rest In Peace Uncle D @derekho1980 until we surf again in heaven.🤙🏼❤️🙏🏼My love and condolences go out to the Ho Family. #pipeline #master #legend #firsthawaiianworldchapion #emeraldcity”

Landon Mcnamara: “You can see at the start of this clip me pulling back, and the only reason is because I saw Uncle Derek Ho going for it, and I’m not even gonna try to say I gave him the wave because in my eyes any wave he wanted out there was his, that’s the respect I had for him and how much of an idol he was to me. Im lucky enough to have shared sessions like this with him, some good times, and inspirational one liners he’d throw my way every now and than that I’ll never forget. I love you Uncle D thank you for paving the way and being an inspiration for a GoofyFooter. The NorthShore, The surfing world, and Pipeline will never be the same again. All my love going out to all the HO Ohana, if you need anything I’ll be there! R.I.Paradise Uncle D”

Gerry Lopez: “One of Hawaii’s Surfing Greatest ambassadors has left us and it’s a sad day. Derek Ho leaves behind immeasurable memorable moments for so many friends, loved ones and even strangers. He lived with Aloha.”

Kala Alexander: “The man. The myth. The legend. Our hero. Words can never express what this man stood for and meant to all of us growing up here in Hawaii. From the first time I surfed #Sunset and #Pipeline 38 years ago until now #UncleD was always on the best waves and dominating. He always surfed more than anyone. Always so psyched. More psyched to surf than anyone I have ever met. Only #UncleMike and #Mason came close. Going to miss that smile and that #Mana. My Aloha goes out to the Ho Ohana. Love you guys. I’m always here for you. Love you Uncle D ! ❤️ You always put a smile on my face. #FirstHawaiianWorldChamp #Hawaiian #KanakaMaoli #NorthshoresFinest #WaimanaloBoy #LegendsNeverDie #RestinParadise #AhuiHou”

John Florence: “Such a sad day for our community. Derek Ho has been someone ive always looked up to growing up, from being the first Hawaiian world champion to being able to get giant barrels at pipe in his fifties with his brother and family. I hope that I can be surfing out there smiling getting waves like he did when I’m that age with my brothers. Thank you Uncle Derek for all you have done for our sport and all the inspiration you have given 🙏🏽”

Nathan Florence: “A devastating loss to the surf community and entire Ho family, RIP uncle D, Gonna miss seeing your grin and watching you part a line up of the best surfers in the world just by looking at a wave! You led the absolute top of the Pipeline hierarchy with style and honor and she will miss you greatly, thanks for paving a way for all surfers out of hawaii🙏.”

Strider Wasilewski: “@derekho1980 has moved on… my heart and soul feel this one deeply and I send so much love to his family. Pictured here just last April he was surfing his beloved Pipeline to the end 🙌! My whole life I’ve looked up to you Uncle D, so thank you for inspiring me. When I close my eyes I see your smile and when a set is coming I see your smirk! I promise to continue to surf Pipeline as long as I can, in your honor legend… #rip #legend #pipeline #hawaii #uncled #thankyou #legendsneverdie”

Tom Carroll: “R.I.P. Derek🙏🏼♥️🙏🏼waves of memories all day long today – hard to place in words😔. Wow we had some beauties together, those paddle battles under lip and posturing on the beach before semi and final bouts in The Pipeline Masters to working out which wave to take in the fifteen wave set during Inland Surfing Championships Allentown, Pensilvania wavepool (1985) – immeasurable contrasts. But it was playing out of tune music with the boys up at your house in Pūpūkea remains the highlight of our connection. I’ll always have with me how incredibly gracious you where both in victory and defeat. A sign of a great champion – thank you for pushing me to my best🙏🏼🌊🙏🏼. My heart goes out to all the Ho family, sending all my love to you guys right now♥️💯♥️ Your gifts remain within us Derek Ho 🙏🏼🎶♥️”

Barton Lynch: “I came across this shot on Thursday night going through an album @photogordinho had shared with me years ago and thought I would give D a call in the morning and see if he wanted to surf Goat’s then woke to the news of his hospitalisation. Fark, then I was getting ready to go bed last night And see @jamie_mitcho post and start hoping it’s wrong and then see other posts but go to bed unable to give up hope. Waking this morning I am heartbroken by the reality of losing our brother, we are sending all of our love and respect to the Ho Ohana, I love you guys and am hurting with you. Can’t wait to hug you. For me Derek represented freedom, he lived by his rules and was never anybody’s puppet. He was a sharp deep thinking individual who used it to become an inspired competitor and surfer of legendary status. The first Hawaiian world champ and he continued his brilliance all the way to the end. Life is not a race or about who is here the longest it’s about what you did with the time you got and my brother lived his dreams and killed it, great innings D your contribution will last forever. @kianaho @makoa_ho @xococoho @cocom4debarrelkilla @t_ho_tata @kala___grace #hodynasty this is D beating me in the final in Japan. RIP”

Mick Fanning: “So sad to hear we lost another great soul. Uncle D was always such a friendly and funny guy towards me. Full of life and quirky in the amazing HO family way. To see him still surfing places like pipeline as good as anyone at 55 is a huge inspiration. Your memory, legacy and character will live on and inspire many in the future. Much love to all the Ho family in this time. Love you 🙏🏼❤️”

Balaram Stack: “My first thought was that this is going to be a hard one for us all to swallow. Uncle was a human that taught me so much from watching huge casual pipe barrels to countless stories on the deck just his presence would teach you how to be a good human and a pipe surfer. Thank you uncle D. Rest in paradise. 🖤”

Jake Paterson: “So sad to hear the news about one of the greats @derekho1980 RIP mate. I was lucky enough to start my pro career when Derek was still on tour. He smoked me in ping pong one year at Bells that I will never forget, and I will always remember how happy he was when I sore him. Thoughts go out to the whole Ho family. 🙏🙏🙏🙏🙏”

Brian Bielmann: “The Surfing world has lost a world Champ, the North Shore has lost a brother, and Pipeline has lost a KING. RIP Derek Ho. We Love you. Our prayers to Tanya and The Ho Family”

Dane Gudauskas: “Rest is peace Derek! A true inspiration through and through!! Thank you!!! Long may you ride… 🙌💔🌊 so much love to all the Ho fam and north shore community, thinking about you guys!”

Kalani Robb: “Thank u for teaching me all the real life lost art lessons @derekho1980 ❤️”

For the best surfing related news articles and wave shredding, be sure to frequently visit: https://www.surfer.com/