“Did Target just move Black Friday up to October 7?” by George Anderson plus retail industry experts weigh in on this important question: “Has the beginning of October replaced Thanksgiving week as retail’s start to the holiday season?” via Retail Wire 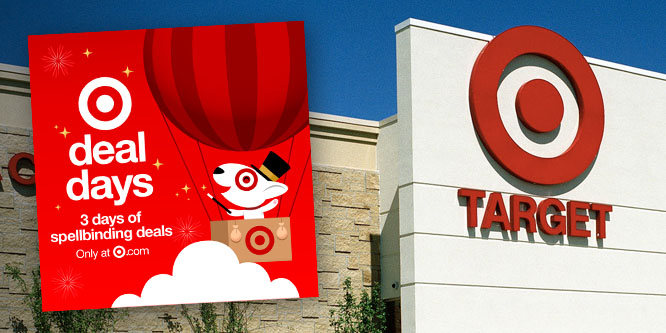 Christmas creep is dead. Retailers moving their holiday promotions up from Thanksgiving Day week is now just business as usual. It is for Target, which announced it is kicking off its holiday season push with its biggest ever “Deal Days” promotion running from October 6 (Thursday) to October 8.

The retailer said it would offer “hundreds of thousands of incredible deals” and that it would extend its holiday price match guarantee from the first day of the Deal Days promotion through December 24.

“The holidays are a treasured time when our guests come together with family and friends to celebrate the joy of the season, and we’re here to make that as easy as possible for them to enjoy,” Christina Hennington, executive vice president and chief growth officer, Target, said in a statement. “That’s why we’re rolling out deals earlier than ever and ensuring our team is ready to help our guests shop when and how they want. Throughout the season, guests will discover new and differentiated items for gifting and gathering, including only-at-Target owned brands and must-have national brands, and they can expect great deals and everyday low prices at every turn for an unmatched holiday shopping experience.”

Target is supporting its holiday efforts with plans to add up to 100,000 seasonal workers to its payroll. It hired around 130,000 seasonal employees in 2021, CNBC reports.

The retailer, which fulfills more than 95 percent of its online orders, will put its new associates to work in stocking and organizing stores, packing and shipping online purchases, assisting customers in stores and handling pickup duties in-store and curbside (Drive Up).

The chain is counting on starting wages between $15 and $24, flexible scheduling, benefits and the prospects of work beyond the holidays to attract the best candidates. It expects that about 30 percent of those hired for the Christmas season will remain as employees beyond the holidays.

Target, it could be argued, is getting a late start on Christmas compared to Walmart. The retailing giant announced that it was kicking off its holiday promotions on October 1 and adding three “no concerns” return options including a January 31 cutoff for returns as well as curbside returns and return pick up of returns at the homes of its Walmart+ members.

Walmart plans to add 40,000 new workers for the season.

DISCUSSION QUESTIONS: Has the beginning of October replaced Thanksgiving week as retail’s start to the holiday season? What do you see as Target’s strengths and vulnerabilities heading into the 2022 holidays?

Walmart and Target are playing strong offense this holiday season, and the early start is indicative of this. Target is the winner when it comes to store fulfillment and curbside services, and I expect to see them be even stronger this year. Target is also one of the very best executing retail operators in the market. Between their strong private brands and their strong store-in-store offerings in cosmetics and toys, I expect them to lead the holiday season.

Good points Mark! Walmart and Target are savvy retailer and fierce competitors. The holiday season has been starting earlier every year for the past five years and there is no end in sight. The early start benefits shoppers as they can spread their spending over more time and hopefully snag some bargains before prices go up due to inflation.

Consumers are planning to start shopping earlier this year to spread out the cost of the holidays. Retailers are responding to this and to the fact that they are keen to get an early bite of spending in a market that may be more subdued. Of course, once one retailer starts the bandwagon, everyone else jumps on for the ride. This includes Amazon, which will likely run some kind of deal day in late October. Target is in a reasonable position with regard to sales this holiday, but profit is another matter: there is still a lot of inventory to clear down and they have to keep a lid on prices if they want to keep consumers impulse buying. Margins will be crimped.

The focus on “Black Friday” is misguided. The day after Thanksgiving will always be a huge shopping day. People are home, have had enough “family time” for a while, and are eager to get out and do something.

Moving holiday deals up earlier and earlier — we’re all looking for a little extra advantage. If consumers respond, it will happen. If they don’t, we might see those early deals move back closer to Christmas. And if the season shapes up to be disappointing this year, as I suspect it might, we’ll see retailers hit the promos in December and this whole conversation will be moot.

I hate how far we are stretching our definition of “the season,” but have no reason to doubt Target’s strategy. They have been right so often and so consistently, I would guess this move will certainly have an impact on other retailers who have also witnessed their sound strategies over the past several years. I would not be surprised to see numerous copycat promotions in early October…

Boom. From Thanksgiving to Halloween to the beginning of October. Can Labor Day be far behind? Black Friday has been more of a value driven marketing handle than a specific day for a while now. When we find out about an October Prime Day that should make it all official.

This year, more than any other year, FIRST DOLLAR CAPTURE is king in the race to sales. The push to hire a glut of more staff makes capture more important than ever. Let the games begin.

Unless every single retailer on the planet gets together and decides to move Black Friday, it’s not going to happen. We can talk about this all day long, and strategize until our heads explode, but the simple fact of the matter is that consumers love Black Friday, and Black Friday happens on the day after Thanksgiving. Any other big sales are just a bonus.

Black Friday will always be that day. It’s a day when most of us are with family and friends and this communal shopping is ingrained in our DNA. Attempting to shift buyers to shop early will require deep discounts and the inherent risks and margin hit if a retailer could have sold at full price. Risky business!