“Do drinking and shopping mix?” by Tom Ryan via Retail Wire 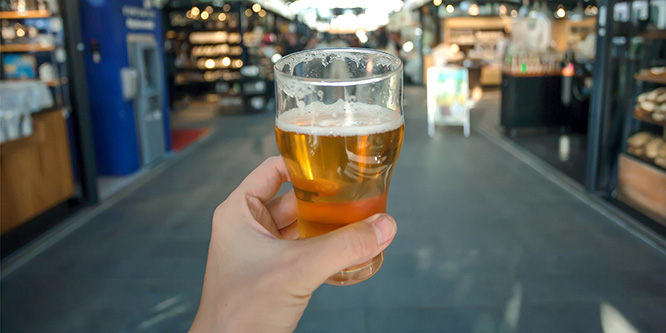 Tempe Marketplace and Desert Ridge Marketplace in Phoenix on Jan. 12 will become the first outdoor shopping centers in Arizona to allow shoppers to drink alcohol as they shop.

Vestar, the owner of both centers, had argued that malls need to become more relevant as destinations by offering food, beverages and entertainment such as nearby concerts, holiday decorations, fire pits and stage performances — not just shopping.

“We say it helps everyone by increasing time spent at the shopping center, which increases everyone’s sales,” Pat McGinley, the president of management services for Vestar, told the Phoenix Business Journal.

The law enables on-site restaurants or bars to offer alcoholic beverages for consumption in common areas of the mall property during designated dates and times. Shoppers won’t be able to take their drinks into parking lots, road areas or outside the mall.

Many municipalities relaxed their open container laws during the earlier stages of the pandemic to help revive downtown districts and the trend appears to be sticking.

In July, Angola, outside of Buffalo, became the second village in the state of New York to lift its open container law.

Speaking to AZ Weekend, Nadia Muller, who lives in Glendale, outside Phoenix, said she was concerned about shopper safety and drunk driving as public drinking arrives at Tempe Marketplace and Desert Ridge Marketplace. She said, “This is not Vegas. We might only be four hours away, but it’s still not the same.”

Most villages that have lifted open container laws claim they have not seen an increase in litter, disorderly conduct or crime as some residents feared.

Last November, however, Fort Worth, TX, banned open containers or public consumption of alcohol in the West Seventh Street entertainment district due to a sudden increase in crime and underage drinking.

DISCUSSION QUESTION: Do you see more pros than cons for retailers in expanding open-container drinking at outdoor shopping centers and downtown districts?

There’s nothing wrong with responsible consumption, but “responsible” is the operative word. As much as I understand the desire to create unique shopping experiences and expand services, I just don’t see a lot of upside in offering open-container drinking in outdoor shopping centers, but there is plenty of potential downside if some shoppers imbibe too much and become a nuisance or a safety issue.

The owners of both venues claim they need to allow alcohol consumption to become more relevant. More relevant to whom? There is little upside for retailers in this move, and the potential negative outcomes are too numerous to count.

If it’s true that there is not an increase in crime or traffic accidents (drunk driving) then fine — if it keeps people there longer AND spending more money, I’m fine with it. That said, I can go a couple of hours without a drink.

As Marilyn Monroe once said, “Happiness is not in money but in shopping.” Add liquor into the mix and for some they’ve found paradise, especially since shopping is often a very social activity. Does retail need to transform into an experience to keep people engaged? This could be the ticket!

I don’t see the downside to having a drink while shopping. It adds to the experience. High-end luxury retailers have long offered their customers/clients/guests a glass of wine while they shop. Grocery stores have done the same. The concept is not new. I’m surprised it’s taken until now to have this discussion. For malls and retail stores to survive and thrive, they must come up with new and innovative experiences. While having a drink while shopping isn’t a new concept, it’s not been the norm. As the experience continues to evolve, we’ll see concepts like this coming to fruition.

Open container shopping villages is an interesting initiative. Do we really need alcohol to make shopping engaging? I think alcohol has its proper places (home, restaurants, sports, entertainment venues), and I’d err on the side of caution with this initiative.

Loosening shoppers up a bit as they check out the merchandise and increasing dwell time? Sounds like a winning strategy as shoppers seek out experiences and entertainment. The merging of retail and hospitality has been going on for a while and is thankfully gaining traction.

Drinking in stores already happens during special events, and in some grocery stores that serve wine while you shop. These new laws, however, appear to be about permission to drink alcohol in outside common areas of shopping centers, not in the actual stores.

Using alcohol to make your destination relevant, and to entice visitors to stay longer, seems like a decision made by people who have never had to work with shoppers at store level. If things get out of hand it’s the retailers who will have to deal with it.

From a retail standpoint, I am all-in on this idea: the more we integrate shopping into our lifestyles, and our lifestyles into shopping, the better. It sounds like municipalities may have to keep an eye on ensuring the drinking remains responsible, but that seems no different than enforcing responsible drinking laws at other community events.

The mall used to be a destination, and a place to meet and socialize. COVID-19, and to some extent “Gen Next” have meant that spending the afternoon hanging out with friends at the mall is less of a happening. Adding in something to keep people socializing and making the mall an afternoon or evening event is fine.

Forget about the “destination shopping” lyrics — that is corporate jargon. Introducing alcohol to the shopping experience is a GREAT idea, for the merchants. I am not sure about the shopper, whose “shopping inhibitions” would be loosened — causing them to purchase more! Stock up on the snack food and candy and watch sales increase!

When Whole Foods did this a few years ago and called it “5 on Friday,” where they served small flights of five different wines at 5 on Fridays, the place was packed. Then Giant Eagle copied them and they too were packed during this type of alcohol-fueled promo. And high-end shops in places like Beverly Hills have been doing it for decades — but this idea scares the heck out of my old retail ops instincts. Since Murphy’s Law is the #1 law of retail, the idea of dealing with drunken (I know it’s a bell curve) customers and/or having to train staff on how to deal with them is a no-go in my book. If you have to resort to this, you should start to look at your product development a little closer.

Retailers are concerned about the cost of doing business. They will need to be prepared to fund extra security. Is hanging around with alcoholic beverages and creating a party atmosphere really conducive to increased retail sales? The Tempe location will be a good test because that is near the university so it is likely to have a lot of people looking for a good time. The populations at the Tempe Marketplace and Desert Ridge locations are quite different so this should be an interesting test.

This is generally a good thing — allowing malls an advantage. Given how much business they’ve lost to destination stores, this can help bring people back.

I can’t avoid the irony, though, as the U.S. has clamped down on underage drinking and raised the legal drinking age everywhere to 21 we are also expanding drinking in public locations where adults drink alongside their kids.

When fundraising for non-profits we always get more donations where alcohol is involved, and the “Don’t drink and Prime” meme seems to be a recurring theme on social media, so it can definitely help loosen wallets. But it will be important to track whether it drives an increase in returns as well.

I know both of these locations well and think that drinking while shopping is fine. They are both open malls with lots of restaurants and bars, many of which have outdoor spaces where people can already eat and drink. Desert Ridge has a performance stage and screen, so it will be nice to allow people watching or listening to have a drink while doing so. Moreover, both locations have very good security so I expect any trouble will be nipped in the bud!

Is this even a new idea? The only difference I see is that we’re moving from being served alcohol in one retailer to now carrying a glass from one store to another. I remember visiting a Nordstrom in Long Island, NY that had a bar in the men’s department — I always thought that was GENIUS — a huge step above a chair outside the women’s dressing room where “he” would sit with the wife’s purse in his lap. As is the flagship Whole Foods in Austin, TX serving microbrews to be consumed in-store.

H-E-B even tried to install an outside beer garden in/around the Austin area years back (though it was thwarted by an underhanded move of a local Catholic church that opened a satellite classroom within a certain distance of the store, thwarting H-E-B’s ability to serve beer legally).

I expect more malls to integrate food and beverages into the shopping experience as restaurants, bars and coffeehouses become big draws to these venues.

Sadly I see more cons, especially in our current politically, socially, and culturally polarized environment. Add “open carry” laws to an open-container environment and it seems to me you are asking for trouble. Sorry to be a wet blanket, but enough people have been killed or wounded while shopping by sober people that we ought to think twice, and maybe three times, about adding adult beverages to the mix.

Malls certainly need to up their appeal with events, etc. to become a community gathering area. Being able to shop with a drink is nice but shouldn’t be the big selling feature. Gen Y and younger are less interested in having a drink as they are the ones driving the no/low movement.

This is insane. Shoppers with children now have to deal with intoxicated people shouting and swearing loudly plus let’s not forget cannabis is made legal in the Grand Canyon State. Not to sound like an old fuddy duddy but this is plain dumb. It will reduce foot traffic due to safety, security and overall less pleasant shopping environment. Now I am all for a beer and popcorn at my favorite AMC Theatre but open carry in a state where the sun shines warmly and many, not one cold beer sure quenches your thirst — forget about it!

Not really a novel idea. However, a potential win-win for shoppers and retailers. Let the spirits flow. As my father used to say, “Everything in moderation, including moderation.”

I wonder what the return rate is for people who shopped while they were drinking.

Wine bars work well in the supermarkets that have them. At least I haven’t heard of any problems. Open-container drinking “might” work well at outdoor shopping centers. Why not try it on a trial basis and see what happens?

I think it is a balance and location by location based on demographics. There is always a chance of spillage causing damage in the stores, I assume individual stores still have option to request no food or drinks in store? At this point, shopping is entertainment and it isn’t the first time. Many upscale boutiques will offer shoppers a drink and Nordstrom has a bar inside some stores (though you can’t take the drink shopping).