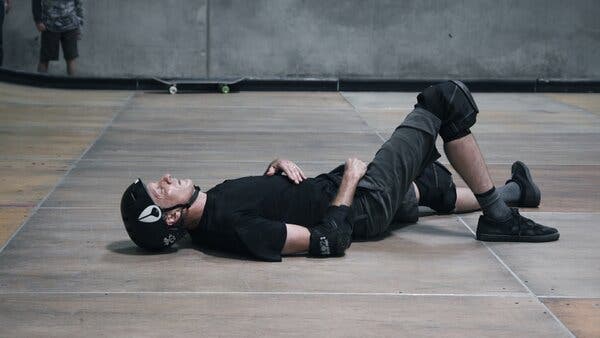 In the documentary “Tony Hawk: Until the Wheels Come Off,” director Sam Jones chronicles many of the bad falls and injuries of Hawk’s long career. One of the worst injuries came after filming when he broke his right femur. Credit…HBO Documentary Films

A documentary chronicles the challenges of Hawk’s skating career. He sat down to discuss the devastating leg injury that made promoting it (and walking) a challenge.

While everyone’s attention was focused elsewhere, another thing happened at this year’s Oscars. Tony Hawk, the world’s most iconic skateboarder, unveiled his latest trick: Standing without a cane.

Hawk, 53, took the stage with Kelly Slater and Shaun White to introduce a James Bond movie montage, but it was Hawk’s mobility that seemed the most notable. Less than three weeks before, he had snapped his right femur when he misjudged the landing on a McTwist — a 540-degree aerial rotation. It’s a trick he’s done tens of thousands of times. That day, though, his speed was off.

Surgeons repaired the bone with a titanium rod, and a physical therapist designed an aggressive rehab regimen, but neither offered a timeline for recovery. Their reticence granted Hawk something like permission. The next day, he posted a video of himself crutching his way down a hospital corridor.

A week later, he shared another video where he tentatively skated across the bottom of his ramp.

His unmistakable goal in an aggressive therapy regimen was to walk unassisted onto the Dolby stage. Hawk’s stick-to-it-iveness is the stuff of legend — his quest to land the sport’s first 900-degree spin spanned four White House administrations — but his approach to this rehab is, in technical terms, bananas.

Hawk’s femur break came the day before HBO released a trailer for “Tony Hawk: Until the Wheels Fall Off,” a long-awaited documentary about his life and career which spends ample time on his injuries. Directed by Sam Jones, the film excavates the roots, reaches, and complex consequences of his perseverance.

In many ways, the documentary is an unlikely coming-of-middle-age story, for both Hawk and skateboarding, with an arc shaped by loss. The loss of innocence, sure, and loved ones, certainly and sadly, but Hawk’s other losses have sometimes liberated him rather than constrained him. Like most skaters, he sees skateboarding as his means of self-expression, yet the medium is more chisel and stone than brush and canvas. Every failed attempt, passing year, and snapped femur becomes a chunk of unessential marble that must be cast aside for the sculpture to emerge. It is an art born of battering, but what many fail to see is that the skater isn’t the one chipping away with the hammer and chisel; the skater is the stone.

With the documentary set to premiere on Tuesday, Hawk sat down over the weekend to discuss his life, his career and the injury that will require even more reinvention.

This conversation has been condensed and lightly edited for clarity.

I just had some X-rays, and I’ll see my doctor on Monday. His attitude is basically that my leg is never going to be stronger than it is now, so if I can handle the pain, then go for it. I’m in uncharted waters here, but it’s all on me. If I can drop the cane by next week, I’ll be on track.

We have an event on the weekend of May 12 in Las Vegas, and I want to skate in that demo. Devo, Modest Mouse, Descendents, and Warish are playing, and the best vert skaters will be skating all weekend. We’re never going to get that lineup again, so I don’t want to miss it.

Your documentary comes out this week. It’s an inspiring ride. What made you want to tell your story now?

It was Sam. Had anyone else done it, the story would’ve been formulaic: You have some ups and downs, then you find massive success, then the credits roll. Sam was interested in the whole trajectory. Anyone else would say my career ended 15 to 20 years ago. I like to think I’m still relevant and pushing boundaries, and Sam did, too. I also feel like I have enough distance after coming through my own challenges, so now was the right time to tell the story.

The film doesn’t shy away from the challenges you’ve faced on and off your board, but it also gives a glimpse into how much you’ve changed.

My wife Catherine [Obreht] was the catalyst. Our connection was so special, the idea of being able to envision a life with her, that’s why I wanted to make such a positive change. One of the moments in the doc is where Stacy Peralta is calling people around me after I’d taken a heavy fall. He was worried about me slamming like that at my age. One of the first people he called was Catherine. That’s how you get to me. The person I seek advice from starts and ends with my wife.

Tony Hawk’s Greatest Trick? Becoming a Middle-Aged Skateboard Star“I’m so thankful that people still think I’m relevant, that they want to see what I do.”

Another theme in the film is the toll skating takes on the body, especially an aging one.

Yeah, I didn’t expect that to be such a focus. I understand it, but when you see so many bad falls in close succession, you don’t realize that most of my skating now is goofing around with my friends and trying to relearn fairly basic tricks from the 80s. Before I broke my leg, I think I was skating the best I have in the last five or 10 years. Not the best I’ve ever skated, but the best in recent years. I got cocky on a McTwist, and that’s on me. In general, I feel like I’m a much wiser skater now. I can still get obsessive about tricks, but I can also relax. I’m much more calculated now, more aware of worst-case scenarios. I guess that’s a form of maturity?

Is there something you want people to take away from the doc?

I hope it champions skateboarding for them. Yes, you’re seeing the grit and hard work and sometimes the setbacks, but I hope audiences see what skateboarding can do for someone; it can give them a sense of identity and self-confidence that maybe nothing else could. That’s exactly what happened for me.

For all the things you’ve gotten from skateboarding, you’ve given back as well. What can you tell readers about The Skatepark Project?

When I was young, I had a skatepark in my area. It was the only place where I felt like I belonged. At the time there were maybe five skate parks in America? I never took that for granted, so when I had a position of influence, the first thing I wanted to do was provide that kind of opportunity and environment for underserved communities. I wanted to offer that to youth that felt disenfranchised like I did. That’s still the priority, and The Skatepark Project staff does incredible work; they deserve all the credit.

It’s amazing because skateboarding is for everyone, absolutely everyone, and that’s not true of other sports. Go to any skatepark and if it’s light out, the park is in use. What other sports facility is like that?

I want to put weight on my leg. I want to skate the demo at the Weekend Jam in Vegas. Before I got hurt, I was working on a new video part, so I hope to be able to finish that. The irony is that before I broke my leg I was toying around with the idea of doing a farewell tour of demonstrations. I don’t know if anyone would be interested in that, but maybe? We’ll see.

A version of this article appears in print on April 5, 2022, Section B, Page 8 of the New York edition with the headline: Whether Hitting Ramp or Standing on a Stage, Hawk Still Has a Story to Tell.

A Rock Star’s Next Act: Making Montana a Skateboarding Oasis Jeff Ament of Pearl Jam is bringing high-end skate parks to every city and town in Montana that will have one. “It’s much bigger than skateboarding,” he said.

Mexico City’s Newfound Status: A Skateboarder’s Paradise With improved accessibility and support from the government, skateboarding schools, stores and a diverse social scene have taken flight

Skateboarding’s Cardinal Rule: Dare to Be You We asked photographers across the country to document how skateboarders come together to foster community

Other articles related to Until The Wheels Fall Off Documentary: