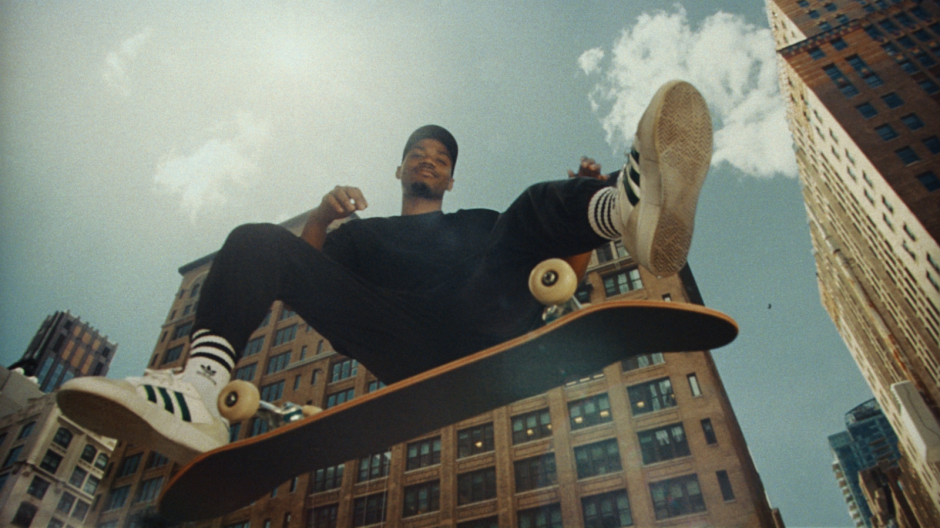 Just four days before the official kick-off of the Tokyo Summer Olympics, Facebook has launched a new global ad campaign that showcases stories of how Facebook communities and technologies have helped bring together passionate skateboarders and skateboarding fans from across the globe — and advanced the sport itself.

Facebook has today unveiled a new multichannel global ad campaign that aims to help people “change the game” with its platform and technologies. To run during NBC’s coverage of the 2021 Olympic Games in Tokyo, the spot celebrates Facebook’s vibrant skateboarding communities. This is the first year that skateboarding will be included in the Olympic Games.

Brought to life by agency Droga5, the multi-app campaign includes creative for Facebook, Instagram, Facebook Blue App and Oculus. There are a total of four films, including one directed by pop-R&B icon FKA Twigs.

“Facebook is proud to celebrate skateboarding and its athletes around the world, as the sport takes the global stage in Tokyo for the first time,” said Andrew Stirk, Facebook’s vice president of global company marketing, in a statement today. “Skateboarding is a grassroots sport and culture, centered around connection and community. This work celebrates the authentic stories of skaters using our platforms to find each other, broaden the culture, and push the sport forward.”

Skateboarders and skateboarding fans have a notable presence across Facebook platforms. More than 34 million users follow skateboarding creators on Instagram, while Facebook is home to skateboarding groups and communities with over 5.7 million users. Ahead of the summer Olympics — which represents a major milestone for the sport — Facebook recognizes an opportunity to engage these passionate users more deeply.

The campaign seeks to connect with these users by depicting true stories of how Facebook apps have connected skateboarders around the world and how the sport has evolved with the help of Facebook technologies and platforms. All the campaign assets share the overarching theme “We change the game when we find each other.”

“The skateboarding debut at the Olympics this summer felt like the perfect moment to tell stories about how the sport has also evolved to become more inclusive and illustrate the role Facebook’s suite of apps have played — helping people find each other in sports and beyond — to build great things,” said Felix Richter, Droga5’s co-chief creative officer in a statement today.

The films were shot over 17 days and across four continents. “Skate Nation Ghana” for Facebook Company, created by a collective of four directors from Daniel Wolfe’s production company Love Song, tells the story of how Joshua Odamtten learned to skate by watching videos of Chris Cole. Odamtten eventually launched Skate Nation Ghana, a community to bring skateboarders in Ghana together.

“No Comply” for Instagram was brought to life by French filmmaker Yann Demange. It showcases how Instagram has brought together skateboarders of different backgrounds from around the world and inspired them to share their own unique takes on the popular “no comply” skate trick.

The FKA Twigs-created spot is called “Longboard Family,” and was created for Facebook Blue App. Depicting the rich community and history of longboarding and longboard dancing, it showcases DoYoung Gwon, Ko Hyojoo and Jonbing Jo, the admins of popular Facebook Group Longboard Dancing Lab, a group that unites longboard dancers in South Korea and globally.

A final film, “Once upon a time everywhere” for Oculus, Facebook’s VR headset and VR platform, was directed by Argentinian filmmaker Juan Cabral.

The campaign builds upon Facebook’s “Find each other” brand platform it kicked off in March of 2020, which encourages people to connect across Facebook properties to achieve more together.

The debut of the new campaign comes on the heels of Toyota’s decision to pull its spots that were slated to run on Japanese television during the Games and growing debate over the value of sponsorship for brands during this unprecedented and unpredictable time in history. Amid widespread public health concerns and growing controversy about even holding the event (with 83% of Japanese residents voicing their opposition), a growing number of brands are questioning whether their participation will be worthwhile.

Even so, Facebook felt that the Games represented a good opportunity to reach and engage a valuable segment of its user base. Thom Glover Droga5’s group creative director, said in a statement: “With skateboarding making its debut at the Olympics, we wanted to highlight different skate communities around the globe who have used Facebook to pioneer amazing things, from a highly influential skate culture in a country where none existed before, to pushing the boundaries of what’s possible in skating, technically, creatively, imaginatively.”

The campaign rolls out Monday, July 19 and will be activated with various cross-channel initiatives throughout the Games. The Tokyo Olympics opening ceremony will be held this Friday, July 23.

The Drum is a leading global publisher for the marketing and media industries. Their mission is to help our 1.2 million-plus readers prepare for what’s next. They provide actionable insights, guidance, inspiration and solutions. Each day they offer a deeper take on what’s important for their community — of thinkers, doers, creators and innovators. Click here to check it out: https://www.thedrum.com/us