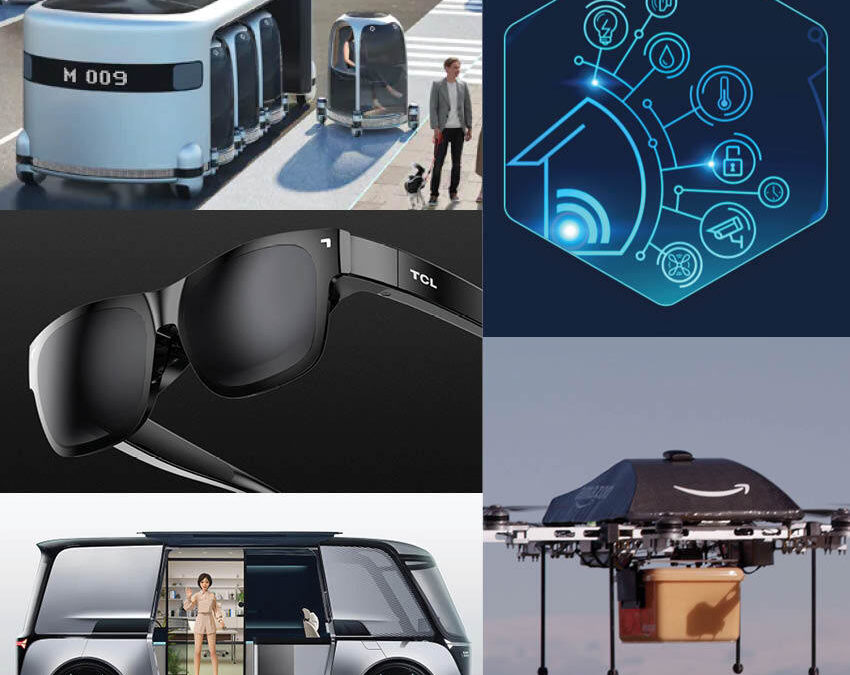 Well, that was interesting.

When CES 2022 came to a close, one day ahead of schedule; attendees were dismissed early as “an additional safety measure” for minimizing the risks of Covid-19. (Apparently the brain trust at the Consumer Technology Association – the entity which produces the annual Las Vegas extravaganza – didn’t think that the risks of Covid-19 would be all that high on the first few days of the show.)

The Show Must Go On

Granted, show organizers were pretty much in a no-win situation. The pandemic had already forced the 2021 show to go completely online – an endeavor that was generally viewed by most long-term showgoers as something of a dud. I completely agree as I was involved in the production of several exhibitors’ “virtual CES showrooms” which amounted to producing a slickly produced half-hour magazine show that highlighted brands’ new products. It looked great, but CES is really the place you go because you want to touch and see the new tech up close.

Retail executives as well as leaders at consumer brands should really be thinking now about how AR/VR can be leveraged to help position themselves for the day when the tech eventually matures, and adoption reaches the tipping point.

But this year event organizers seemingly made a suicide pact and vowed to make sure the show would go on no matter how much incoming fire they took on– and boy was there pressure to cancel.

It was undoubtedly all this pressure of high profile dropouts that compelled Consumer Technology Association president Gary Shapiro to post a lengthy Christmas Eve rant/missive/justification for why the show was still marching forth, Omicron-be-damned, on his LinkedIn account, stating “For those who are vaccinated and willing to take the minor risk of Omicron and a quarantine, CES may be worth it.” In the end attendance at this CES was down more than 75 percent from 2020 levels.

The drop off in attendance was likely due to many of the biggest brands having stayed home from this year’s event. Just prior to the Christmas holiday, the ATF (no, not the Bureau of Alcohol, Tobacco, and Firearms) – otherwise known as Amazon, Twitter, and Facebook – announced they would not have a physical presence at CES; then came Google, Microsoft, Lenovo, and Intel; and just days before the whole shindig was set to kick off, TikTok, Peloton, and AMD among other big names said they would be no-shows. In all, well over 150 major brands bowed out, leaving much of the cavernous floor space at the Las Vegas Convention Center looking more like the set of a Nevada ghost town than a series of connected pavilions teaming with, as it did in January of 2020, upwards of 170,000 visitors from around the world geeking out at the latest in gadgetry.

Tech Ramps Up for Retail

Of course, despite the long list of high-profile cancellations, plenty of firms did indeed show up, giving those emboldened attendees who risked entry (it was free this year) and the media a glimpse of what to expect not only in the year ahead but what is brewing out in R&D labs around the world. And for retailers, the implications couldn’t be clearer: new tech will continue to challenge the sector to evolve at an increasingly rapid clip on all major fronts: product mix, customer engagement and loyalty, in-store technology, payments, logistics, and platforms.

Here are five clear high-level implications for the retail sector emerging from CES 2022:

One of the most salient take-aways from this year’s CES was the basic realization of how sweeping the changes associated with the electrification of mobility will be across all facets of society. Today when we think of electric vehicles (EVs), images of Teslas, Rivians, Taycans, and the like are the first to come to mind. But Korean automotive manufacturer Hyundai, which recently bought robotics company Boston Dynamics, is looking at ways to deploy electric motorization across, well, just about everything.

At CES, Hyundai unveiled its Personal Mobility and L7 concept vehicles, which will mobilize, automate, and electrify almost anything you can think of with vast consequences for just about every industry. From autonomous pizza delivery vehicles to robots that literally bring the TV to you wherever you are (eliminating all the hassle of having to walk over to the ‘home theatre room’ within one’s abode), this ‘Plug ‘n Drive,’ or PnD, technology presents a modular platform that brings an element of mobility to traditionally inanimate objects. The L7 is highly modular, meaning the same four-wheeled platform can serve as the basis for transporting goods within warehouses and providing customer service logistics support in moving luggage through a hotel or an airport.

Google Glass was a pretty spectacular failure on all fronts, but it provided an early glimpse into the world of Augmented Reality (AR.) And while Virtual Reality (VR) has matured a bit, finding modest success in the gaming world, one of the other major takeaways from this year’s CES is that every major technology company is investing eye-popping sums in near-eye applications for business and everyday life. Take for example TCL’s NxtWear Air which just debuted at CES. These wearable glasses will let you view anything from your smartphone through the dual 1080p micro OLED embedded in the lenses, replicating the effect of viewing content on a 140-inch screen. (We need that, right?)

And TCL is not alone; Panasonic unveiled its new ultra-light weight set of Micro LED VR glasses called the ‘MeganeX’; musician will.i.am and entrepreneur Mark Cuban talked about how impactful AR/VR will be in entertainment and sports. Boil it all down and this much is clear: AR and VR are definitely in their awkward teenager phase, still dealing with a few blemishes and greasy skin, but so much capital is being plowed into the space that the contours of the near future will almost assuredly lean on these technologies in a big way Retail executives as well as leaders at consumer brands should really be thinking now about how AR/VR can be leveraged to help position themselves for the day when the tech eventually matures and adoption reaches the tipping point – both of which will happen soon with near certainty.

First there was NATO. Then came the Home Connectivity Alliance, or HCA, as insiders call it. It’s a loose confederation of product manufacturers looking to openly collaborate and innovate to provide a safe, secure, and interoperable connected home experience to consumers. This budding alliance among a diverse array of manufacturers is aspiring to create the industry Rosetta Stone that will ensure that your Bird Buddy smart bird feeder will notify you when bird seed levels are running low (and auto-orders new feed from Walmart) is using the same protocols as your Lenovo Smart clock with built-in Alexa capability. As we all know, most of the time (actually all of the time) connected devices are only interoperable with a given platform, so good luck getting your smart dishwasher on the same page as your Roomba. I have a name I coined for this whole aspirational ecosystem of communicative and interconnected IoT devices that are then linked to outside retail providers like Amazon: Home Commerce or “H-Commerce.” (I charge a dollar every time someone uses that phrase by the way.)

And H-Commerce was in full display at this year’s CES. Leading home appliance manufacturers including Samsung Electronics, GE, Electrolux, and Trane Residential are joining a master Jedi alliance called Matter, which is supported by Amazon, Google, Apple and Samsung. Matter is guided by the Connectivity Standards Alliance, or CSA, which includes Ikea, Huawei, Arlo, and others. Confused by all these treaties, pacts, and covenants? Don’t be. The end result of these agreements is an inevitable ecosystem in which everything talks to everything. As all this unfolds, retailers will find themselves in something of ‘49ers Gold Rush as they scurry to ensure that their platforms have formed the right alliances early on and are fully enmeshed into the budding and increasingly ubiquitous H-Commerce ecosystem.

Repeat after me: Drones are not a gimmick.

In fact, as one technologist at this year’s event told me, today almost every American would be totally freaked out – or at least would grab their smartphone to record the event – if she were to open the front door and find a drone hovering six feet in the air with a delivery package and robotic voice asking her to “secure the package.” Such an interaction will be entirely routine at some point within the next five years, according to my well-informed friend. Although my 50 year-old brain still can’t quite believe that such a disruptive force in logistics (and, not to mention countless other applications) is all but a few years away, the sheer advancements in drone tech at this year’s CES was nothing short of jaw-dropping.

Although we are only two years into a post-pandemic world, the institution known as “the office” is already under serious assault. Despite legions of carboniferous managers still steeped in 1980s and 90s work culture clutching to their need to have employees under their constant surveil, the culture is changing making work-from home the new norm. In fact, the rise of remote work is amounting to what some labor experts are calling “the largest change in American working and living conditions since World War II.”

And with this massive shift underfoot, so is the technology and gadgetry that is being used to support this next generation of at-home office environs so that it is less the crude appendage that it is in many cases to the family home but rather as a fully integrated function of what working and living at home will look like in the years to come. Bottomline: office life, family life, personal life – it’s all converging in ways that will make 2019 seem like 1991 in only a few short years.

Case in point: At this year’s CES, companies like LG are asking, via the new technologies they presented, some profound questions about what life will be like when we no longer have this hitherto rigid segmentation between work and home governing our day-to-days. What if our home, our car, our gym, and our gourmet grocery store was one in the same? The LG Vision Omnipod, for example, is an autonomous pod that can serves as a mobile workspace, a private outdoor office, a fun camper for a family of four, a personal aerobics studio, or a completely immersive VR studio.  LG is just assuming that the idea of commuting to a physical office is “so 2019.”

The repercussions of the end of office life as we know it will have a massive impact on retailers. Traditional office clothiers like Men’s Wearhouse will have to pivot quickly and adjust their inventory to meet plummeting demand for formalwear. On the other hand, home improvement stores like Home Depot, Lowe’s, and Menards will be challenged to create new product lines and how-to programs for families eager to get a jump on reconfiguring or expanding their homes to accommodate for the permanent nature of work-from-home.

Of course, product mix is only the tip of the iceberg in terms of changes demanding action from retailers. Fewer office trips will mean less time in commutes which will impact how advertising dollars are spent. Consumers who will more reliably be at home during the day will affect services appointments and delivery logistics.

If technology is a leading indicator, the traditional office is dead, and retailers best sell off all those neckties quickly.

Arick Wierson is a nationally renowned political and business columnist for CNN, Observer, CNBC and Vice and a six-time Emmy® Award-winning television producer and documentary filmmaker. Wierson served as a long-time political and media advisor to former New York City Mayor Michael Bloomberg. You can follow him on twitter @ArickWierson