“Has Surf Culture Outgrown Competitive Surfing?” by Sam George via The Inertia 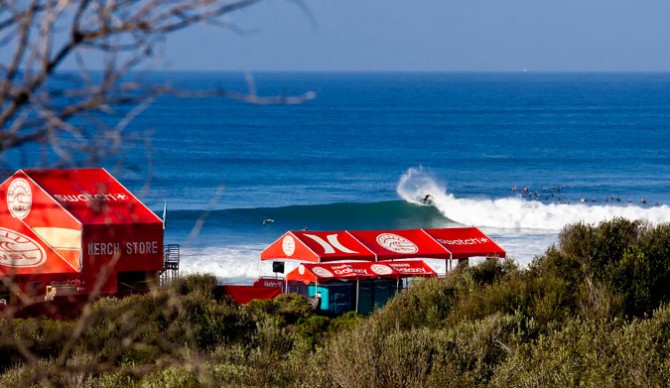 A scene that after all these years, isn’t that different from the one below. Photo: Sean Rowland//WSL

I was never much of a professional surfing competitor. Meaning an honest personal assessment would place me far from a serious contender, but more like an enthusiastic member of the C+ Team.

I surfed my first International Professional Surfers event in 1979 and can’t say I ever busted down any doors. Oh sure, I did occasionally manage to scratch out a few decent results, like the quarterfinal finish at the 1980 Malibu Pro, where I was driven close to tears by 1976 world champ Peter Townend who, brutally applying the archaic interference rule, kept me from catching more than one wave. And the 1983 Bells Beach Quiksilver Trials, when, like some uninvited wedding crasher, I snuck my way into the final, finishing fourth behind actual surf stars Gary Timperley, Mark Warren and Col Smith.

Today, however, I’m pointing to my participation in the earliest days of the modern pro tour, along with subsequent decades covering the professional competitive scene in the role of surf magazine editor, merely to establish my qualification in making the following statement: No organization or sanctioning body has ever presented professional surfing better than the World Surf League. 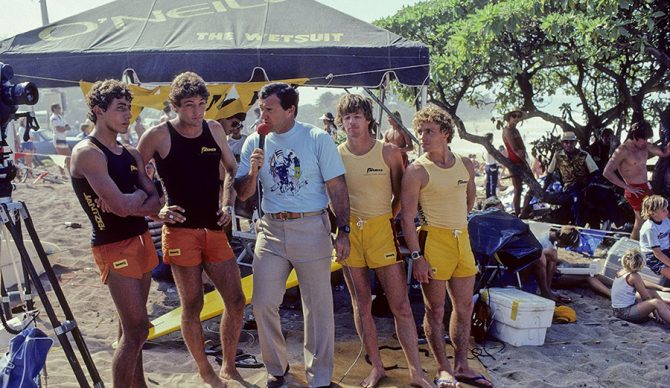 Beach interviews may have been more robust back in the day, but the end result now is similar to yesteryear. Photo: Jeff Divine

Consider what the WSL has provided to pro surfing fans, season after season since its inception in 2015: A completely autonomous international men and women’s tour and rankings system, completely disassociated from any outside commercial interest. Premier venues, especially as judged by the 2022 itinerary: Pipeline, Sunset Beach, Peniche, Bells Beach, Margaret River, G-Land, Punta Roca, J-Bay, Teahupo’o and Lower Trestles. With the exception of the Oi Rio Pro, not a sloppy beachbreak among the bunch; no eight-inch Chiba, Japan or blown-out, high tide, Sunday afternoon finals at Huntington Beach to contend with, as in days of old. And if the pros find that surfing an artificial wave of the sort that 99.9 percent of all other surfers in the world can only dream of riding is boring, then that’s their fault, not the WSL’s. Add, for good effect, excellent streaming coverage, capturing all the action from multiple camera angles, including drones and water photography, instant replays, as well as full event and heat-by-heat replays, competitor profiles and arcane stats and data.

Ok, the WSL’s commentary team, target of the most pitiless criticism, more than earns its derisive “Wall of Positive Noise” moniker, but what are the pundits nostalgic for? The good old days? Like that time in the early 1980s, where at the Bells Beach contest, the event sponsors put one of their pros in the announcer’s booth for every one of his fellow team rider’s heats, where he’d call out which wave in a set to take? Anyway, what should we expect when the men and women in the WSL announcer’s booth are, in fact, employees of the tour. Can you imagine what pro football commentary would sound like should the NFL, not the networks, provide the commentators for every single broadcast? Now that would be boring.

No, taking all this into account, and viewed objectively, it’s difficult to point at much that the WSL is doing wrong. Yet it often seems that the tour’s critics far outnumber its fans, so many of whom can’t wait to tell us what “the problem is” with the WSL. Apparently without giving that problem very much thought. Because the problem really isn’t that the WSL has failed in its presentation of professional competitive surfing. It’s simply that surfing has outgrown “professional competitive surfing.”

Think back to 1976, the year the modern professional world tour was born. The two surf magazines, SURFER and SURFING were published bi-monthly, meaning only six times a year. Surf movies? Maybe two or three a year — and then only if you lived in Huntington Beach.  One big surfwear company, Ocean Pacific, and a small, selling-boardshorts-out-of-the-back-of-the-car startup from Australia called Quiksilver. More importantly, a monocultural surfing population consisting almost entirely of young males, aged approximately 16 to 25, who tended to dress the same, ride the same sorts of surfboards, and dream the same dreams, most involving a trip to Hawaii — the North Shore, especially, being portrayed in what media existed as surfing Nirvana. 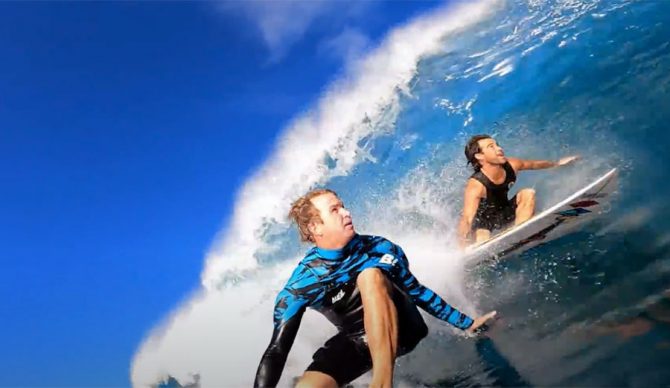 These guys certainly weren’t in the picture when contest surfing was in its infancy – and “freesurfing” wasn’t a thing. Photo: Jamie O’Brien//screenshot

The story of a handful of surfers, almost exclusively from Hawaii and Australia, making a marginal living by competing on an international tour, the big payoff being the winter season on the North Shore, was an easy one to sell, and an even easier way to market t-shirts and surf trunks.  So with nothing much else happening in surfing at the time, save for the occasional discovery of a new exotic wave, impossible to get to for most surfers, professional competitive surfing fired the imagination of the aforementioned monoculture and flourished for a time; the only game in town, if you were to believe the surfing media.

A game that in its intention and execution has changed very little over the past 46 years, except to reduce the number of annual events and increase the number of participating Brazilian surfers. Other than that, at its essence the pro tour format remains virtually indistinguishable from its earliest incarnation, bad judging calls and uncooperative surf conditions included. But then consider how much the surfing world has changed throughout those same decades. Imagine, back when there was no Todos Santos, Maverick’s, Peahi, Mullaghmore, Nazare or Aussie slabs; no Tavarua, Gnaraloo, Mentawai Islands, Desert Point, Skeleton Bay, Salina Cruz or Boilers; no Surf Ranch or Waco Surf; No VCRs, DVDs, digital cameras, GoPros or drones; no surf forecasting, surf resorts or surf schools; no modern longboards, mid-lengths, soft-tops, “alternative” surfboards, SUPs or foils; Very few women surfers; no Kassia Meador’s, Kelia Moniz’s, Leah Dawson’s, Honolua Blomfield’s or Kelis Keliopa’a’s. No “freesurfers,” no Dave Rastovich, Mason Ho or Torren Martyn. No blogs or vlogs; no Nathan Florence at Pipe, Nic von Rupp in Europe or John John Florence sailing across the Pacific.

Over the years, while professional competitive surfing has consistently been presented as a big deal, surfing the sport obviously had other ideas. Those ideas have been collectively manifested into the widely enjoyed, wonderfully diverse activity/lifestyle we know today. Which still has room in it for a professional competitive tour; that a handful of men and women are still making the rounds, tugging on and off soggy wet jerseys in between heats while complaining about the judging, is, for relatively small but passionate group of contest fans, an entertaining slice of our subculture. But only a slice. When viewed from this perspective, the only thing the WSL gets wrong is its overestimation of the broader surfing world’s level of engagement. It’s pretty clear by this point that no matter how good a job the WSL does, the majority of the sport has quite naturally grown up and developed other interests — and in doing so, has left the pro tour behind.