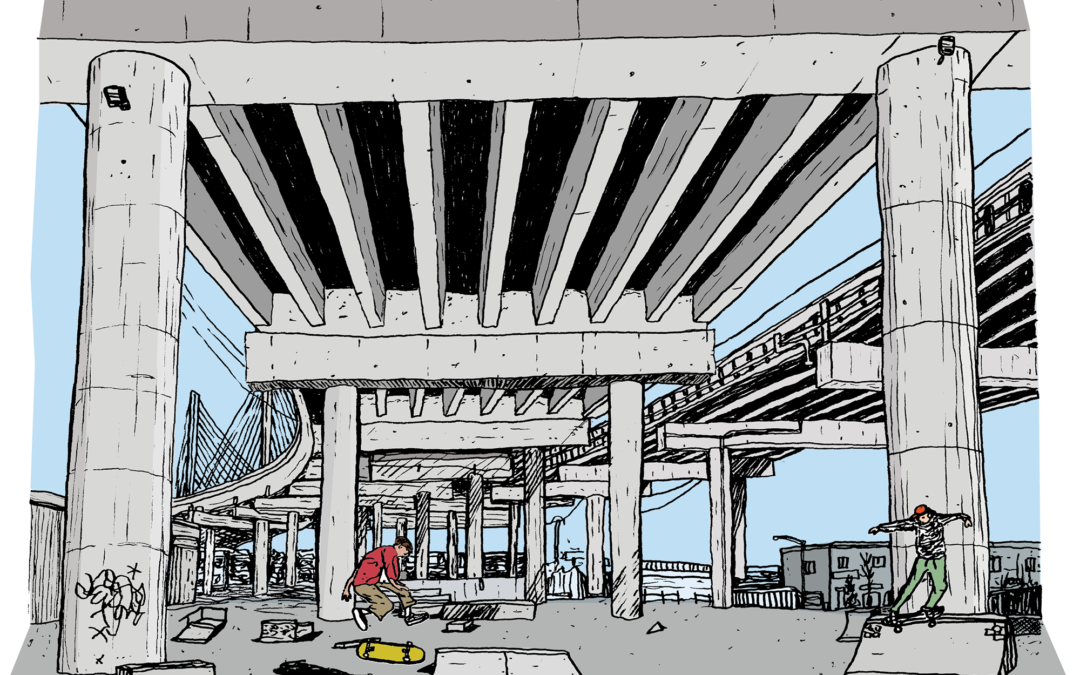 You might have seen footage floating around Instagram of a giant new skate spot somewhere in the middle of New York. Known officially as Under the K Bridge Park, this new hotspot is tucked away next to a recycling center and bus yard in the middle of Northern Brooklyn.

On the surface, it may seem like just another public city park that’s been taken over by skaters, like Tompkins or TF West, but there is something different about this particular space.

K Bridge Park is an anomaly because it breaks a lot of norms we’ve come to expect for newly built public spaces in New York. For one, it’s massive, spanning seven acres, and it’s filled with a ton of skate-friendly obstacles. The ledges and stairs have coping on them and nobody is batting an eye at the dropped-off ramps, rails, or skaters who are there every day.

So is it a city park, a proper skatepark, or something else entirely?

Should we be worried about an eventual crackdown, or is it actually being used exactly as it was intended? After talking with a few people behind the scenes, we got the story behind the park and what the greater plans are for Brooklyn’s newest spot.

To clarify, K Bridge Park is designated as an “open public space,” not an official NYC skatepark, although it has skateable ledges—complete with steel coping—and handrails that are naturally built-in to make the park skate friendly. That means no one’s coming through to knob the ledges or rails here any time soon. It’s actually not even run by the city and is managed by a nonprofit group called the North Brooklyn Parks Alliance instead.

It’s not the first park in the area to be run by a private organization rather than the city, but it is the first to encourage and enable skaters to hang out and do their thing without being kicked out or hassled by security and snooty parkgoers.

The vision for the park began in 2019 when the North Brooklyn Parks Alliance secured a $100,000 grant, with the funding going towards hiring a park designer and hosting community sessions for input on the design. The hard part was going to be figuring out how to utilize a mostly desolate space next to a dusty industrial zone and make it an enticing project worth all the expenses.

If you take one quick look at K Bridge Park, it shares more in common with public spaces you might see in European cities. While it’s laid out like a normal plaza, it lacks all the fancy stonework, wooden benches, or statues of colonial-era figures that we’ve become so accustomed to seeing in New York City parks.

Katie Horowitz, the Executive Director for the NBPA, explained that the plan was always to do something completely different at K Bridge Park. “We ultimately decided on a [design] firm called Public Work, which is based in Toronto because they designed this beautiful space called The Bentway, which is under the Gardner Expressway in Toronto,” she said.

Toronto’s Bentway and K Bridge Park are similar because, in design speak, both are considered “El Spaces”—spots under elevated roads, bridges, and overpasses—so it made sense to contract a firm that already worked on a similar project. During this phase, the local community was surprisingly in agreement, with no competing interests slowing down the process. As Katie explained, “The space itself was so unexpected that people didn’t feel that ownership they feel with parks that are closer to their home.”

K Bridge Park was always intended to have skate-friendly elements built into the design, which is something rarely, if ever, seen before in the US.

Architect Jim Lau knew a lot of the urban elements in his field—like benches and planters—were obviously skateable from working on plazas and parks over his 30-year career. He put it like this: “I was never designing it to be not-skateable. A seat height of 18 inches? That’s the perfect seat height. But in a sense, that’s the perfect height for people to grind too.”

“K BRIDGE PARK WAS ALWAYS INTENDED TO HAVE SKATE-FRIENDLY ELEMENTS BUILT INTO THE DESIGN, WHICH IS SOMETHING RARELY, IF EVER, SEEN BEFORE IN THE US”

The designers also made sure to work with materials that would be strong enough to withstand the wear and tear that would come from skating the park. Asphalt and concrete were cheaper alternatives to more expensive stones commonly found in public parks, like granite, and just so happen to make for smooth roll-ups, grinds, and slides. Much of the uproar against skating in public spaces comes from the concern over the destruction of property, but with such affordable and utilitarian materials being used, the concerns were lessened.

K Bridge Park doesn’t get state funding, so it generates revenue by hosting and renting the space for on-site events. The funds go towards park maintenance, utilities, and eventually, free programming. While it’s currently a popular skate destination, it may also be used by other groups down the line as well, which could shake up the current skate-friendly dynamic currently in place.

That being said, K Bridge Park has so far been a successful experiment that will hopefully lead to similar projects in the future. Allowing skaters to bring skate obstacles in to live alongside the permanent elements is part of why the park has become so popular so fast. The laissez-faire approach the park’s administration has taken up has made it one of the most inviting spaces in the area (despite the noise and dust) and has been a good example of how to create public spaces that effectively serve the needs and wants of a community.

Hopefully what we’re seeing at K Bridge Park is a trend that continues at other multi-use spaces in New York and across the US going forward. Skateboarding has become more common to see, and its Olympic debut gave it more visibility than before, so hopefully, the stigmas that some non-skaters associate with skate spots and skateparks will continue to dwindle.

To compare, I talked with Steve Rodriguez, a local NYC skate legend and activist, about cities like Copenhagen where skateboarding in public spaces is seen as less threatening. “I think there’s too much ownership by the public of, ‘No, this is my space only in America.’ You don’t get that at Israels Plads in Copenhagen, where it’s a big empty fountain with people skateboarding, riding bikes all around, and picnicking,” he said.

In order for the US to catch up and maximize precious public spaces in its most crowded cities, it might be worth adopting similar models more widely across the country.