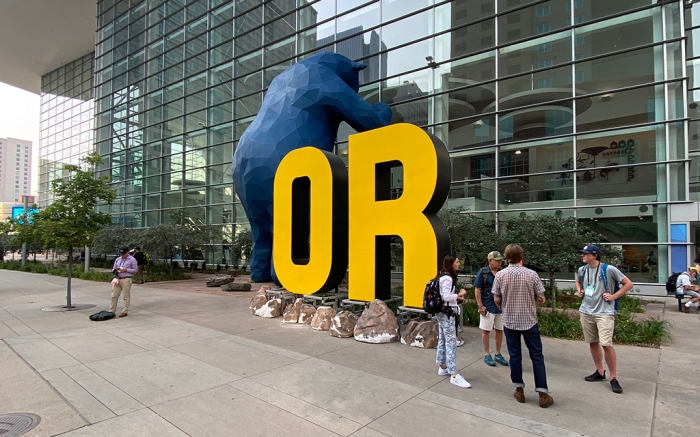 After months of speculation, Outdoor Retailer announced late last week that it would again call Salt Lake City home. The decision was a controversial one, as the trade show departed Utah — its home for 22 years — for Denver five years ago, largely due to a disagreement over public land protection.

Shortly after the move was revealed, several industry heavyweights including REI Co-op, Patagonia and Timberland — who backed last month’s statement from The Conservation Alliance against a potential return to the state — doubled-down on their decision to sit out the trade show if Utah was the location because of the stance of elected officials on national monuments and public lands protections.

Show director and SVP Marisa Nicholson said OR is working to bring the power players back into the fold.

“We are always going to be open and communicating with everybody who is a customer of ours, and working to align what their needs are and what we’re able to deliver,” Nicholson said. “We want to continue to have open dialog and communication to share with them what we’re doing, what our plans are and how we can continue to bring everyone together.”

What makes the return to Utah different than the situation in 2017, according to Nicholson, is support from local officials — specifically Salt Lake City Mayor Erin Mendenhall, who assumed office in January 2020.

“There is opportunity for industry to have a voice and representation to speak to the things that are valuable to our community. Working with Mayor Mendenhall is aligned with our industry’s initiative,” Nicholson said. “Salt Lake City is doing a lot around climate and sustainability and things that are very important to, and aligned with our community, and we saw an opportunity with her to partner on ways for our industry to come back to Salt Lake City.”

Nicholson said Mendenhall is supporting OR and the collective industry’s needs in ways that prior leadership did not.

“There’s always been communication [with Utah politicians], but it wasn’t at the level that it was at until essentially the boycott. At that point, there wasn’t a solid relationship and partnership in place,” Nicholson said.

Last week, OR announced several initiatives that it will launch to promote change concerning the outdoors in Utah for the better, which included a commitment of revenue over the next three years from the events  to fund programs to both support outdoor recreation and protect public lands.

Also, OR will form the Business with Purpose initiative done in partnership with Visit Salt Lake. This initiative, according to OR, will host meetings aimed at addressing challenges, influencing policy, protecting natural and cultural spaces and more. Nicholson said a committee will be formed to influence these efforts.

Breaking down the purpose of the committee further, Nicholson said the brands and retailers involved alongside the government officials and public lands leaders will dictate how the aforementioned funds are allocated, and to what organizations.

Nicholson said OR is looking to announce who will be part of the committee prior to the summer show in June.

Although Nicholson said OR has the support of Mendenhall, it appears as if another state politician, Utah Gov. Spencer Cox, has opposing views. The Conservation Alliance called out current Cox in its statement last month for “once again moving to strip these magnificent lands of federal protection — while simultaneously attempting to woo Emerald to move the Outdoor Retailer trade show from Denver to Salt Lake City.” (Cox released a video in September 2021 urging Outdoor Retailer to return.)

Despite the backlash, Nicholson said having Salt Lake City as OR’s home for the next three years was the best option for the broader industry.

“Our goal is to create an event that brings the whole industry together, that allows for the business needs around commerce, which is ultimately the most important thing that happens at the show. From there, it builds out with the storytelling, the advocacy, the education, the celebration — all the other things that make the show so special,” Nicholson told FN. “There are over 1,000 different brands that rely heavily on the show for all of those different needs. There are thousands of retailers that come to the show to meet those needs, so we have to look at it as what is the greater community need and then deliver on that.”

Traffic at the last two in-person shows in Denver was decimated by COVID-19. OR said the last event, which was the 2022 Snow Show in January, had 328 total exhibitors and 5,350 total attendees, which included 1,390 retail buyers and importers/distributors. Before then, the Summer 2021 show in August had 388 total exhibitors and upward of 7,600 attendees, including 2,200-plus retail buyers and importers/distributors.

However, prior to the pandemic, the attendance was quite different. According to OR, the 2020 Snow Show in January had more than 1,000 exhibiting brands and 25,500 attendees, including 7,000-plus retail buyers and importers/distributors. And the 2019 Summer Market in June had upward of 1,400 exhibiting brands and 23,500 attendees, including more than 5,000 retail buyers and importers/distributors.

Nicholson said the decision to move back to Utah came several months of conversations and considerations that it was finally made the weekend prior to the March 23 announcement. Also, Nicholson said results from the 2021 survey that featured five potential landing spots for the show — including Anaheim, Calif., and Houston — had Salt Lake City and Denver as the first and second most desired cities, respectively, with Las Vegas a close third.

Nicholson said there were three main points that led to Salt Lake City becoming the home once again, most importantly the show dates.

“Ultimately, it came down to timing, and we knew that we were narrowing it down to Denver and Salt Lake City because Las Vegas didn’t have the ability to do January,” Nicholson said. “The calendar in January for trade shows as a whole is jam packed. There are so many different events taking place in that timeframe, and there are only so many places that can host a show the size of Outdoor Retailer. We were able to secure the dates the industry wanted in Salt Lake City.”

“With regards to outdoor recreation and the ability to access to public lands and do the activities our industry is built on, what we realized and what our industry realized is that the ability to recreate those in close proximity to a convention center was much easier in Salt Lake City, and it was missing since we moved to Denver,” Nicholson said. “Our last summer demo, people were complaining that they were on a bus for an hour and a half in each direction, and they felt like they were spending more time commuting than actually having an experience at the event. When we were in Utah, it was 30 minutes.”

Beyond dates and the ability to have outdoor experiences, Nicholson said costs were a concern of attendees, and expenses are significantly higher in Denver than Salt Lake City.

FN is the ultimate destination for industry insiders and shoe lovers alike. From power players to style stars, FN draws on seventy years of history to offer a feet first look at what’s new and what’s next in shoes. The site is your first-stop for shoe news globally. Breaking the latest stories, offering expert analysis and on-trend seasonal coverage, FN is connecting readers to the topics that matter most. Led by an informed team of journalists, the site filters the way we look at footwear. With an eye for what’s next, the newsroom sets the tone feet first.

You can view the article announcing the move to Salt Lake City reposted from the awesome people behind Outdoor Retailer by clicking: here

We, at Board Retailers Association, are very pleased to continue our partnership and to exhibit again at the January 2023 OR Snow Show. Be sure to bookmark and periodically visit our dedicated Outdoor Retailer Snow Show page on the BRA site for additional details about this remarkable trade show as well as the special BRA events and educational opportunities that we will be hosting there. – Doug Works, BRA Executive Director

By the way, if you are considering attending the 2023 show but on the fence due to hotel costs, be sure to email doug@boardretailers.org who will add you to the special list of BRA Retail Member attendees who will be considered for lodging scholarships and enter you into a drawing for a complimentary BRA Distinguished Retail Membership.