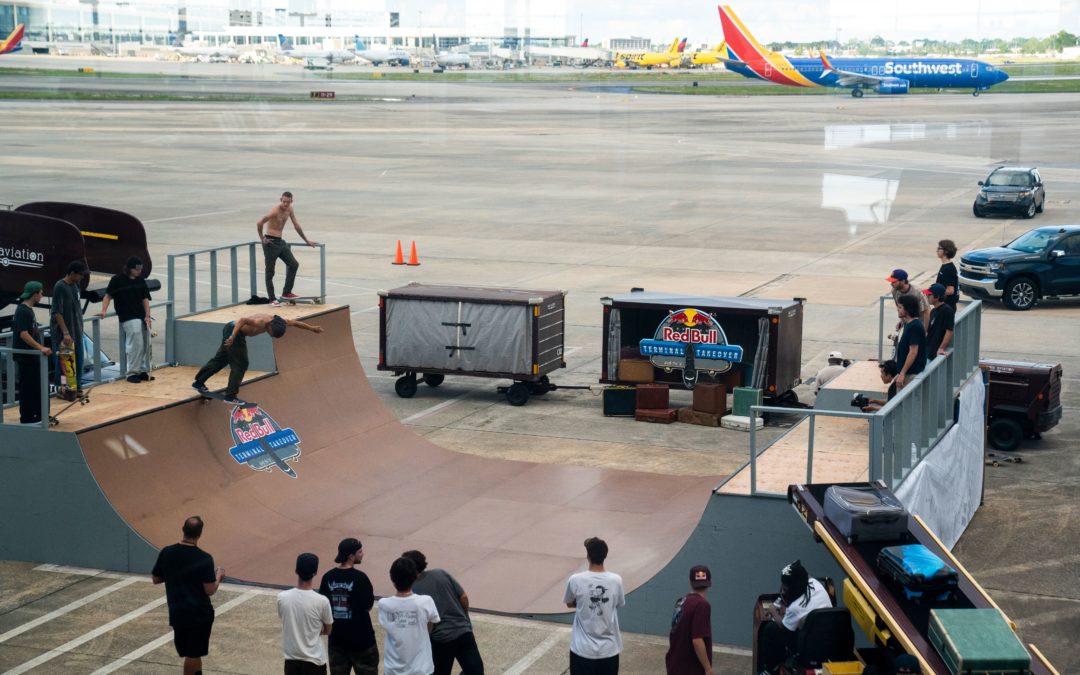 Red Bull has turned the old New Orleans Airport into a skatepark.

After a new terminal in New Orleans International Airport was built, the original terminal has been closed since November 2019. The Red Bull Terminal Takeover took the opportunity and held an event that took place between April 15 to 16 at Louis Armstrong New Orleans International Airport (MSY). The setting of an airport is an exciting place for skaters to skate. As it is difficult to skate in operating terminals of an airport, the Red Bull Terminal Takeover utilized an empty terminal and made a skate park in an airport a remarkable reality.

Skating in an airport is a rare opportunity and that makes the skating park more iconic and valuable for skaters. The construction of the skate park was done by the New York Design and Construction (NYDAC) and Red Bull. The iconic skate park was set up in 4 days and skaters were seen skating in amazing scenery. Ramps such as half-pipe and vert ramps were integrated into the terminal. Through and out the halls of the terminals, rails and gate benches were used as obstacles for skaters to enjoy a unique setting of an airport. The Parabola Park was the location where skaters got to be in the architecture of the airport, using escalators to skate down the park.

One of the most memorable scenes from the skating park is during the tarmac jam session where skaters used the jet bridge to launch onto ramps and perform their stunts. These features were present during the first Red Bull Terminal Takeover in 2021.

Devin Flynn launching himself from the jet bridge and performing a stunt on the tarmac. Photo: Jonathan Mehring / Red Bull Content Pool

However, a new skate park was created in the old ticketing counter location hence, the name ‘ticketing counter’ is the name of the newly added park. The new park used kiosks, benches, and a golf cart as a part of the park.

Each team is to make a two-minute video showcasing their skateboard tricks and stunts around the MSY skate parks and the tarmac. The team with the most votes for their video will win a $5000 prize. The winner of the Red Bull Terminal Takeover 2021 was the team from Nashville.

Jake Wooten, a Red Bull skater showed his appreciation of the event by stating,

“I couldn’t believe we were able to do Red Bull Terminal Takeover the first time,”

“Being able to do it again is an opportunity I would never miss out on. Seeing the faces of

everyone who walks in solidifies the reason why we’re doing this for the community.”

To conclude the event with an eye-catching style, a Red Bull Aero GP1 pilot Kevin Coleman flew an Extra EA-300 aircraft, flying by the tarmac with a low pass three times.

The Red Bull Terminal Takeover was a remarkable event. Turning an old and empty terminal into a skateboarding park is a sensational project and a dream come true for both professional and amateur skaters.

Jeremy Kang (6 Articles Published) – Journalist – A pilot in training, Jeremy comes to Simple Flying with nearly 5 years of writing experience. He combines his interests in journalism and flying to contribute to the aviation community. Based in United States. More From Jeremy Kang

The leading independent voice for aviation news and insight. Launched in June 2018. Our goal is to provide a one-stop hub for all the key stories on commercial aviation, sharing the news in a simple, accessible way. We cover all regions, and all aspects of commercial aviation. We’re digital first, and all of our content is free to read and access.