“IOC approves proposal to include skateboarding, surfing and rock climbing at 2028 LA Olympics” by David Wharton via LA Times 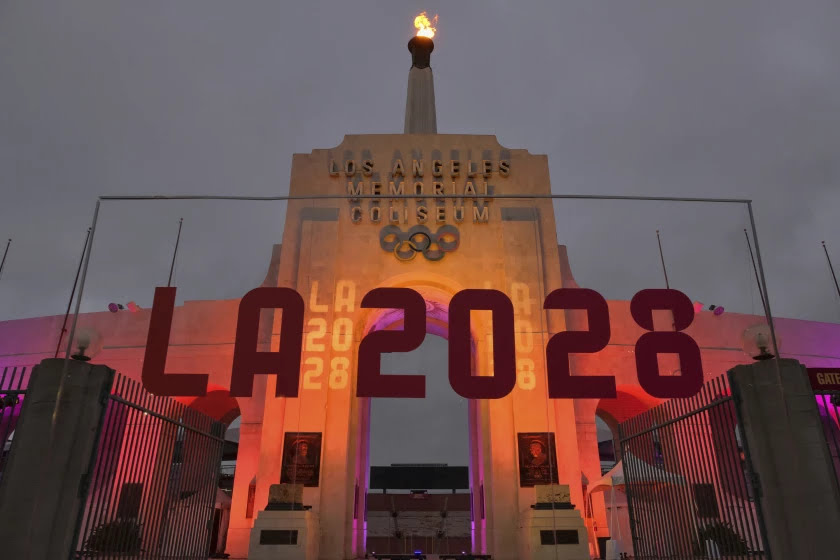 An LA 2028 sign is seen in front of the Olympic cauldron at the Los Angeles Memorial Coliseum.(Richard Vogel / Associated Press)

The International Olympic Committee has approved a proposal to include surfing, skateboarding and sport climbing among the core sports for the 2028 Summer Games in Los Angeles.

The decision came during an IOC session on Thursday, a day before the opening ceremony for the Winter Olympics.

“The LA28 Games have always been about bringing more freshness, youthful energy and creativity into the Olympic and Paralympic movement,” Casey Wasserman, chairman of the L.A. organizing committee, said in a statement.

As prototypical Southern California activities, surfing, skateboarding and sport climbing made their Olympic debut in Tokyo last summer and will be included in the “additional” list for Paris in 2024.

They fit with an IOC campaign to attract young fans to an international competition that has seen its viewership continually skew older. Keeping the new sports around for 2028 represents another step toward cementing their place among more traditional events.

“We have always known that surfing was a natural fit for LA28,” said Fernando Aguerre, president of the sport’s international federation. “As the official sport of California, surfing is action, youth and energy combined.”

The organizing committee had previously unveiled an adaptable emblem that allows artists, athletes and celebrities to craft their own versions of the “A” in LA28. Singer Billie Eilish and actress Reese Witherspoon have contributed, as have a streetwear designer, a chef and a tattoo artist.

Pro surfer Carissa Moore has now designed a logo for her sport. So has climber Nathaniel Coleman and Sky Brown, a bronze medalist and pro skateboarder.

“It’s so easy to hold yourself back from trying something if it seems scary,” Brown said. “I want my ‘A’ to help people believe in themselves and do what they love.”

David Wharton is a feature sportswriter for the Los Angeles Times.

The Los Angeles Times is the largest metropolitan daily newspaper in the country, with more than 40 million unique latimes.com visitors monthly, Sunday print readership of 1.6 million and a combined print and online local weekly audience of 4.4 million. The Pulitzer Prize-winning Times has been covering Southern California for more than 140 years.