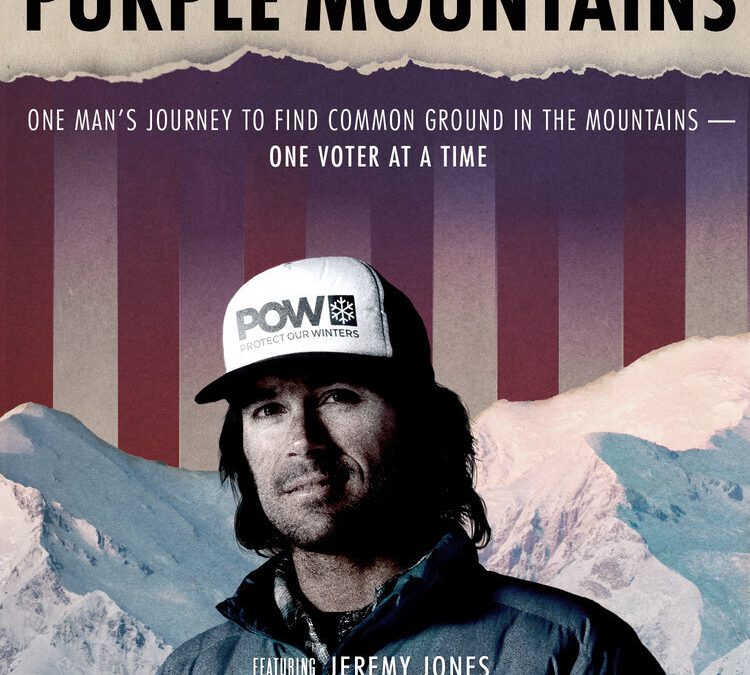 According to the film’s description, Purple Mountains is, “One man’s journey to find common ground in the mountains — one voter at a time.” That one man is snowboarding legend Jeremy Jones.

Jones is one of the greatest freeriders of all time, helping to pioneer professional big mountain snowboarding (especially human-powered big mountain snowboarding). More recently, he’s also made a name for himself as a climate activist. In 2007 Jeremy founded Protect Our Winters (POW), a nonprofit dedicated to activating the outdoor sports community in the fight against climate change, and in 2010 he swore off using helicopters and snowcats, making a personal commitment to earning his turns.

Named for the need to influence key swing states in the upcoming election (and perhaps an ode to the line from the song America the Beautiful), the film follows Jeremy on a journey to understand why the U.S. is so divided on climate change and how we can find common ground through the American love of the outdoors. In doing so he hopes to energize the ‘Outdoor State’ – the 50 million people in the U.S. who identify with the mountains, the rivers, and the sea. The film is a must watch for any American, especially those who fit the ‘Outdoors State’ description.

As he was driving home after a surf trip to Santa Barbara, I grilled him about the film:

What are your hopes for the movie? What do you want it to inspire in people or bring about as a result?

It would be kinda naïve to think some far right climate denier will change their ways, but I’m hoping that someone in the middle might watch it, recognize that climate is the most important issue and vote for a leader who supports large scale Co2 reduction. We’re hoping to reach those people, or get the person who traditionally sits on the sidelines to say, “You know what, this is important and I need to step up and vote this election.”

Tell me more about your no-aid snowboarding. Obviously you need a car to get to the mountains, maybe a snowmobile to get you to the skin trail… Where do you draw the line?

It’s important to note that one of the tactics of the fossil fuel industry is to get us pointing fingers at each other and important to recognize that you can always do better. I live an examined life but the reality is that we live in a heavily fossil-fuel subsidized society and that is what needs to evolve. With myself, I’m driving right now, I drove to go surfing. I’m in an electric car, but it’s not without its own carbon footprint. I don’t see any reason for pointing fingers like, “you’re driving the wrong car.” As for the rest, it’s not like heli skiing got us into this mess, and certainly not snowmobiles. The choice to move away from that is more of a personal choice for me. I’m not living in a tree eating nuts and looking at everyone else saying “you guys are the problem,” because it’s the fossil-fuel subsidized society that we live in that is the problem.

Ok, so if not reducing our own impact, what should we be focusing on instead as the common skier/rider?

I don’t want to minimize personal choices. I believe in the ripple effect. For example, if companies that are working to reduce their impact are the ones people are supporting and other companies see they need to be like that to keep customers, that’s a good trend in the world. If less people are eating meat and plant-based restaurants are kicking ass that’s a great trend. And I don’t want to diminish that. On the other hand it bothers me to see companies that are doing great work to reduce environmental impact within their own company but won’t go to D.C. and push the climate agenda. That’s where the front lines are and as frustrating as politics can be it’s the reality. Roughly speaking, 70 percent of emissions are produced by about 100 companies globally. In the U.S., those companies are often heavily subsidized. That’s not right. And how do you change that? Getting leaders in office who care about the environment. And if you don’t care about that you’re doing yourself a disservice.

So for you its a conglomeration of factors? Personal choices, yes, but also politics.

Yes, and at POW we are trying to mobilize the Outdoors State, the 50 million or so people here in the U.S. that really identify with the outdoors. And they traditionally are not the best voters. Which is why when you’re watching the presidential debate, they’re not talking about the climate because historically no elected official has ever lost their job because of their stance on the environment. And the youth vote hasn’t been there. So they just talk to the people who do vote. We need to energize the Outdoors State to join in the conversation.

Where does the 50 million number come from? What is the group made up of?

Through participation numbers from outdoors sports (Outdoor Industry Association) and people who identify the top three things that they like to do is going outdoors in a variety of different ways. And I don’t have the exact numbers (on where they fall politically) but they are definitely a bipartisan group. What we’re trying to communicate with POW is that your backyard is on the ballot this year. Because without clean air and clean water you can’t do what you want to do, especially in the outdoors.

Find out more about the film and watch the full movie, here.