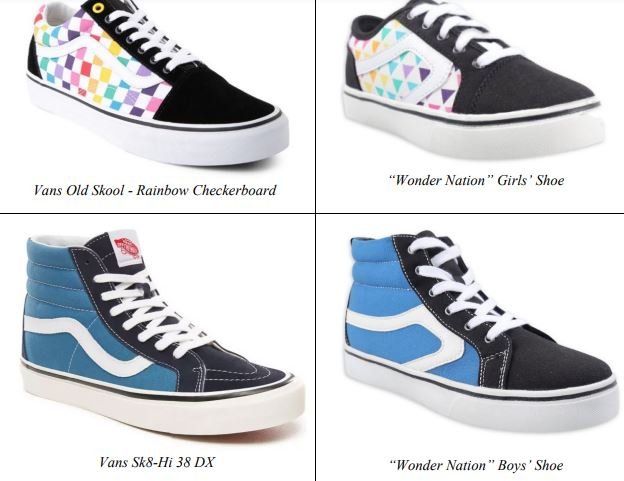 At issue in the lawsuit suit filed by Vans in November are what the skate shoe brand calls more than 20 “blatant knockoff versions of Vans shoes” that Walmart sold through its own private labels, including its Time and Tru, Wonder Nation and No Boundaries brands.

The shoe company argued that the marks Walmart used created confusion among its customers and that the retailer has “flooded the market with cheap, low-quality, and confusingly similar shoes that harm Vans’ goodwill and reputation.” In its lawsuit, the company is seeking to permanently ban Walmart from selling the shoes as well as monetary damages.

Walmart, for its part, argued earlier this year that “Vans is not losing sales and its reputation is not being diminished” and that the brand, owned by VF Corp, “is not suffering any irreparable harm.”

The company also said, before receiving one, that a preliminary injunction would cost it sales as well as the logistical costs of removing and disposing of shoes, which Walmart estimated to be at least $1.4 million.

More broadly, Walmart argued that many of the elements the shoes had in common are “used by numerous sneaker brands,” including Airwalk, Air Speed, Hurley, Vox and DC, among others.

The judge in the case — District Judge David Carter wrote in the injunction order that “the high degree of similarity between Walmart’s allegedly infringing shoes and the respective Vans models raises an inference of intent to confuse.”

Carter also cited a 2014 tweet from Walmart’s official account, which was included in Vans’ complaint, responding to a customer’s request that Walmart carry Vans with the question, “Would you mind a shoes [sic] similar to the Vans?”

Walmart, with its extensive private label offering and growing third-party marketplace, is no stranger to infringement suits. Last year, for example, it was also sued by rapper and fashion entrepreneur Kanye West and his Yeezy brand over shoes that sold over Walmart’s marketplace by third parties. (As it happens, Walmart also sued Yeezy last year over the latter’s logo, which Walmart said was confusingly similar to the retailer’s own “spark” logo.)