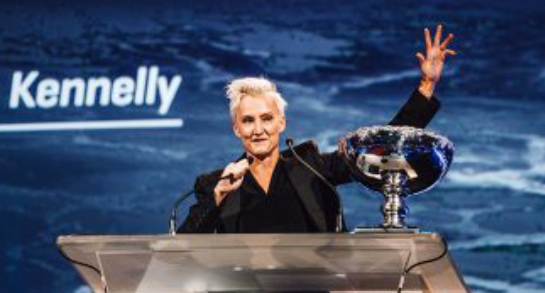 Keala Kennelly from her inspiring speech at the WSL’s Big Wave Awards in 2019. Photo: WSL / Sloane

Keala Kennelly has been leading the fight for equality in surfing for most of her career. She spent 10 years on the Championship Tour and has become a legend in the big-wave realm. Using that platform, she’s pushed for equal pay for women and the inclusion of more women at more surf events. Although the battle has been an uphill one, Kennelly celebrated a victory this past week when she watched the girls surf at the Banzai Pipeline as part of the Championship Tour for the first time. Here, the Kauai native shares what it was like watching the women charge Pipe, why it took so long for them to be included in the event, and the steps she would still like to see taken to level the gender playing field.

You know Pipe better than most. Can you describe how gnarly of a wave it is?

It’s one of the most challenging waves in the world. It’s super heavy, it’s very powerful, it breaks on a shallow reef, it jacks up on the takeoff, and it has very vertical drops with heavy consequences if you don’t make it. And the crowd is one of the heaviest, most aggressive crowds of any surf spot on the planet.

What was it like watching women charge out there?

It was amazing, I was so emotional this whole last week just watching the women compete at Pipe. It’s been a dream of mine since even before we filmed Blue Crush, which was about twenty years ago now. I was on the edge of my seat the entire time. It was so important to me that they performed well so they could justify being there and I think they did that. I was virtually in tears.

Why do you think women have been excluded from the event for so long?

Why did it take so long to see the women at Pipe as part of the CT?

It took changing the permitting system and enforcing it by law to include the women. Not a lot of people know this, but I fought at the city, county, and government level, went to hearing after hearing, helped draft resolutions, and worked with our congress people to get Bill 10 passed to change the permitting system. It was actually more like clarifying the permitting system — when you pull a permit to use state lands it’s against the law to gender discriminate. So, it was just a matter of clarifying and enforcing the law to make it so that when contest organizers pull a permit to have a pro surf event on the North Shore they include the women, which they haven’t done for over a decade.

How is this significant for the younger generation of women?

Have you seen inclusivity in women’s surfing improve since you were last on tour?

No. I think that the prize money changed but as far as events go, my reason for retiring from the CT was because they eliminated a bunch of the events that I was a standout in like Teahupo’o and Sunset Beach and some of the other heavier, bigger waves got removed. They’re only now getting replaced ten years later.

What do you think of this year’s tour schedule?

Holy shit! There’s a part of me that would love to re-qualify and go back on tour because the schedule is so amazing now.

What other steps would you like to see be taken for women’s surfing?

Number one, the surf brands need to step up and start paying their athletes better, and more of them. It’s a disgrace that there are so many women on the CT that don’t have a major surf brand backing them. They need to stop paying models to wear their stuff in all their advertisements. I also think that as time goes on there needs to be a better ratio of women in events. But I celebrate all the little wins and I feel like this last week was a big win for women’s surfing.