“Lake Tahoe Breaks Record for Snowfall in December, Closing Resorts and Roads” by Staff writer via The Inertia 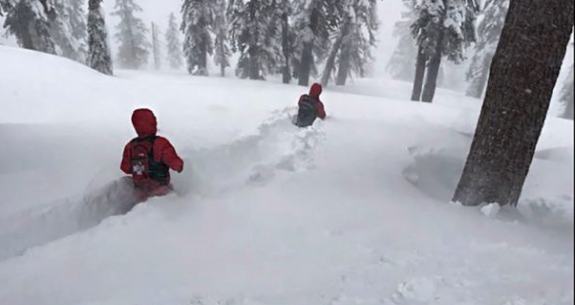 It’s safe to say that Lake Tahoe, Calif. is off to a good start for winter. Maybe too good. The region smashed its record snow total for December, receiving a recorded 193.7 inches, topping the previous record of 179 set in 1970. And there’s still more on the way before the new year.

Climate scientists are lauding the storm as  “very beneficial” to the region that has been hit hard by drought in recent years (quite possibly the understatement of the century).

Resorts like Heavenly and Palisades were closed yesterday due to snow being too deep, with delayed openings today as well. “Today we broke a record,” wrote Palisades on its social platforms. “This is our biggest December storm in 50 years, and it delivered road closures and avalanche hazards. We’ve received nearly SEVEN FEET of new snow since Wednesday! It will be deep out there this week. Be sure to ski with a buddy, keep them in sight at all times, and avoid tree wells.”

Traffic has also been hectic. Road closures have been rife throughout the region. Caltrans announced just hours ago that Highway 50 was closed. Interstate 80 has also seen numerous closures and delays from snow and downed trees. The freeway is currently closed from Colfax to the Nevada state line.

In South Lake Tahoe, resorts like Kirkwood were also having trouble digging out from the record dump. The mountain announced it would try to open limited terrain today as avalanche crews made their way to the summits to control terrain.

Palisades Tahoe also announced on its blog that has been tracking the storm, that slides cut off patrol workers as they tried to access the mountain yesterday: “Around 4:30 a.m. this morning, patrollers were making their way into work at both mountains when a natural slide occurred at River Ranch, going across Highway 89 near the entrance of Alpine Meadows Road. A second slide occurred not long after near the Fir Crags bridge. This slide also crossed the highway. The road was quickly closed, leaving some patrollers and employees caught in the traffic that ensued.”

Regardless, it’s been a storm for the ages and after all this mayhem (fingers crossed), the Lake Tahoe area does look set up for the rest of the season. Happy New Year and be safe out there as you look for powder shots in the Tahoe region.