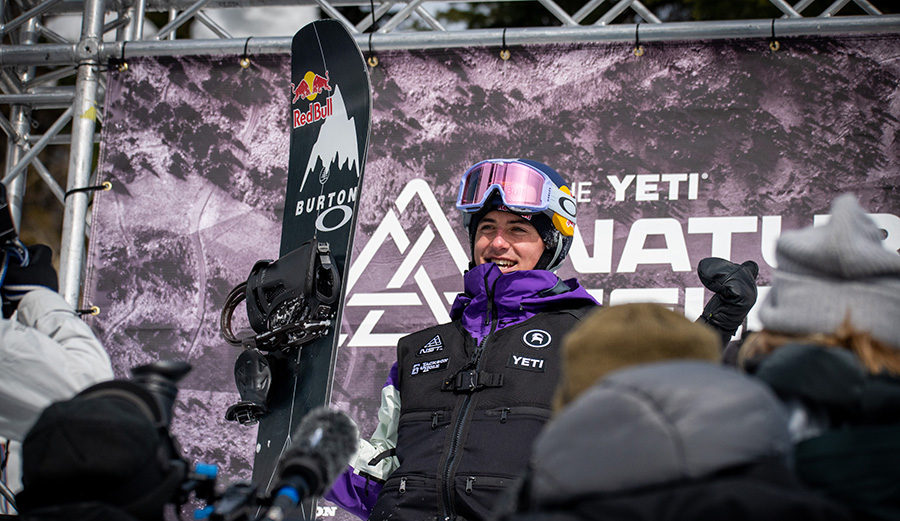 If you’re tuned into the core snowboard community, you know the value of a proper switch method — and from the moment Mikkel Bang took the win over Pat Moore in the Quarterfinals with a switch Method, one thing was abundantly clear — Natural Selection is a competition for your favorite snowboarder’s favorite snowboarder.

The judging might have had the masses scratching its collective head here and there, trying to decipher trick differences and what constituted a stomp, those sorts of details, but in the end, most of it made perfect sense, and the finals day went down flawlessly.

The men’s quarterfinals kicked off the day with matchups that couldn’t have been better on paper — Austen Sweetin vs. Blake Paul, Ben Ferguson taking on Sage Kotsenburg, Mikkel Bang and Pat Moore facing off, and two riders who may go down as G.O.A.T’s, Mark McMorris and Travis Rice going head to head.

Displaying the ultra-smooth style and consistency we’ve seen from Paul throughout the competition, the Jackson Hole native put down a run that Sweetin simply couldn’t match in form or function on this day (especially with a missed landing or two). Ferguson managed to edge out Sage Kotsenburg. Both put down epic runs. A fall on a switch 9 on the final hit doomed Sage’s chances of taking the heat from the ultra-smooth Ferguson, though.

The two surprises of the day came when McMorris took down event organizer/backcountry god Travis Rice, laying down a flawless run with back-to-back 7’s that looked all too easy. Rice, knowing he had to step things up , nearly stole the heat with a double backflip on the final hit, but came up just short.

That switch method we talked about earlier? That’s what pushed Mikkel Bang over the top, who, although he had a fall, took the W over backcountry forefather Pat Moore. The win may have seemed like a surprise to many viewers, but revealed a bit of rationale behind how the judges were making decisions, style and cleanliness would win out (as Rice could be heard saying in the winner’s circle next to McMorris, “Cleanliness is next to Godliness.”)

On the women’s side, the semifinals were dominated by inconsistency as Hana Beaman fell victim to some unfortunate muffs and lost to Zoi Sadowski-Synott who was able to stomp a huge wildcat at the top of her run. Marion Haerty took the win over Elena Hight with an ultra-clean run that featured no tricks, but more importantly no bails.

In the men’s semifinals, the matchups were nearly as juicy — McMorris and Bang faced off, while Ferguson and Paul were pitted against one another. In perhaps the best moment of the competition so far, Bang stomped a front 3 rock tap (after  hitting the tap with too much speed on his previous run and blowing up), and then continued on to link a front 5 to cab 5, riding switch in between hits and showing the world exactly who he is. But in the end, McMorris’s game was simply too refined. He has such vast and varied competitive experience and at this point in his career, an innate ability to absolutely stomp most every trick he lays out. He threw down back-to-back 7’s once again.

This left Ferguson or Paul to face McMorris, and while Blake Paul tried to step things up and throw a back 7 into his run, he was unable to land it cleanly and the competitive experience of Ferguson seemed to shine through (another Olympian in the field).

This set up a finals that we could have expected — two riders with the most contest savvy matched up against one another in a backcountry setting — and it certainly didn’t disappoint. Both took things to another level with McMorris adding a double backflip into his run, and Ferguson a backside 9. Again, McMorris was able to win out with better landings as Ferguson found trouble linking together an entire run.

For the women, Sadowksi-Synott stole the show with perhaps the best run of the women’s competition that included a massive wildcat and a huge back three, easily taking the win over Marion Haerty, who struggled mightily to put anything to her feet.

While there were some kinks to work out (perhaps clarity in judging, as is the case with many judged events), I feel like the event overall was hugely successful. It put relatively unknown riders on the map, showcased the insane skills of riders we know well, and put forward a new type of competitive format that snowboarding desperately needed.

Wondering what’s next? Stay tuned for contest details from Baldface, British Columbia the first week of March, and the finals at Tordrillo Mountain Alaska (March 20-27) —  two venues that could deliver in big ways to this new format that has some serious momentum.