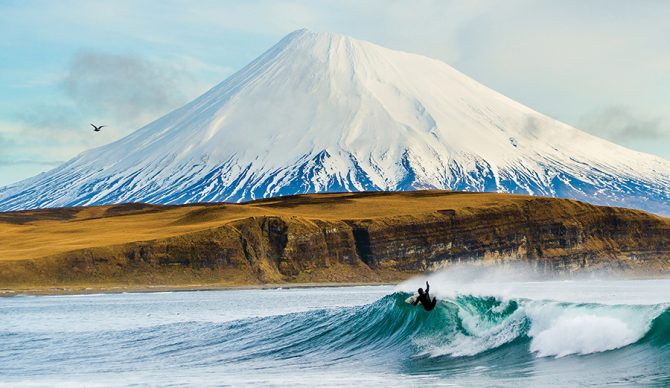 The Chris Burkard shot from Iceland made famous in the pages of SURFER.

Like just about every other surfer over the age of, let’s say, 20, I distinctly remember the very first issue of SURFER magazine I ever saw. It was the summer of 1967, and as an 11-year-old, recently transplanted with his family to Hawaii, taking up surfing was a completely natural thing to do; simply what one did, like wearing rubber flip-flops to school or learning to talk pidgin.

All that changed in a few short moments, when visiting an older neighbor kid’s room I saw on his desk a magazine called SURFER. The cover image: Jock Sutherland, squatting out of a Pipeline curl. Cool shot. But even more intriguing, the accompanying cover blurbs: “Huntington U.S. Championships,” “Mickey Dora on Malibu,” “The Death of Killer Dana,” “Japan Surfatorium,” “New USSA Champ.”

I had absolutely no idea what any of this meant or referred to. But as I picked up the magazine and flipped through its pages I knew instantly that I wanted to learn where Huntington was, who was Mickey Dora, how was Killer Dana killed, and what the hell a “surfatorium” was. Here in my hands, presented in editorial form, with columns, stories, photos and advertisements, was a window into an entirely new world, and the concept, challenging my fifth-grade sensibilities, that surfing wasn’t just something you did, it was something you became – you didn’t just surf, you were a surfer. 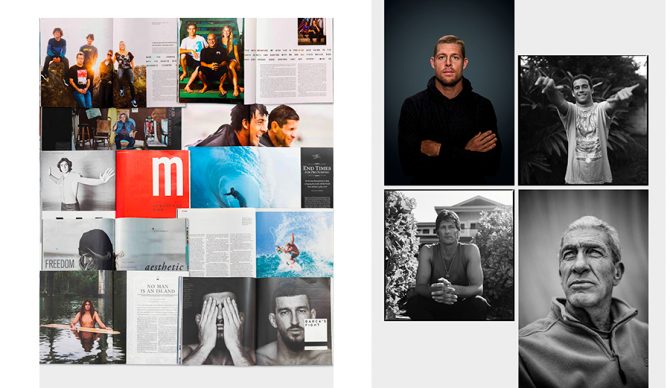 From Mick to Mason, Bruce to Nat, to Dustin to Cliff and beyond, that’s a whole lotta history. Photos: SURFER Magazine 1960-2020

Small wonder, then, that the only approval I sought while growing up was SURFER magazine’s; to be the surfer SURFER told me to be. Even less of a wonder that having passionately adhered to that creed from that first glimpse in 1967, I would eventually go on to work for the magazine, climbing, over the course of a decade, up the masthead from contributor to the editor-in-chief’s position. A post from which I’d publish two books, writing and editing The Perfect Day: 40 Years of SURFER Magazine and SURFER Magazine 50, both titles examining SURFER’s vast influence and enduring relevance. Stating all of this to establish (as well as admit) that I am, by nature, unreasonably protective of SURFER’s legacy, and instinctively skeptical of other’s efforts to provide additional perspective.

All skepticism evaporated, however, upon receiving a copy of Grant Ellis’ impressive, SURFER Magazine 1960-2020, recently published by Rizzoli Books. Not only is this a valuable companion piece to the two aforementioned titles, but an essential volume in its own right, and a “must-have” for anyone even remotely interested in surfing and surf culture.

What Ellis, SURFER’s photo editor from 2003 to 2020, has done is create a remarkable visual timeline of SURFER’s six-decade publication run, presenting the whole colorful, compelling pageant almost entirely without printed word, but rather with meticulously collated pages and images from the magazine. Seamlessly transitioning between eras, this vibrant, fast-paced format belies the incredible amount of research required of Ellis to assemble, for the very first time, the whole picture of SURFER’s history.

“The idea was to celebrate the look and feel of each decade,” says Ellis, who had first envisioned the project long before the Rizzoli deal coalesced. “And hopefully recreate the excitement of what it was like to first open an issue of the magazine in those years, back when you were cutting out pictures and putting them on your bedroom wall.”

A lofty goal, considering the sheer amount of content involved, the primary challenge with this sort of compilation necessarily being what to include and what to leave out. 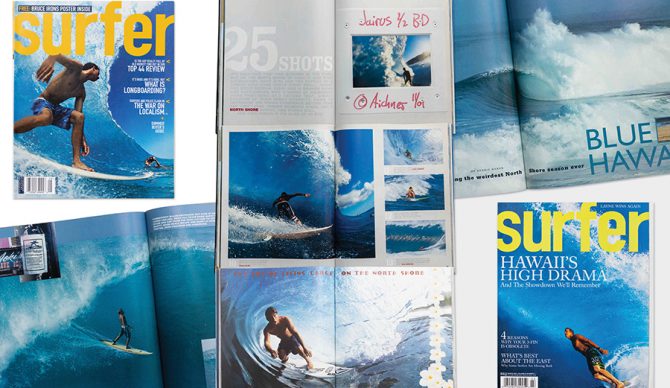 “I experienced so much anxiety over that,” Ellis recalls. “Plenty of sleepless nights, because it was inevitable that I’d end up leaving stuff out that someone thought I shouldn’t. On the other hand, I didn’t just want to run all the obvious hero shots, the ones that everyone remembers, but also include some of the obscure, more nuanced images that contributed just as much to the magazine’s impact.”

Despite the comprehensive visual representation, the theme of impact runs through the entire volume, not only with a foreword by Pulitzer Prize-winning author William Finnegan and accompanying (and short) essays from all living SURFER editors, but the manner in which, by delineating each decade with a complete collection of its covers, Ellis elegantly makes a powerful statement about the current state of surfing media.

“I think people forget how important the magazine was to their lives,” asserts Ellis. “In that it offered a linear timeline of our history and culture. Today’s media tends to play everything either as a series of highlights, or present various topics like in a collage, unconnected to what happened the previous month or months. My game plan was to provide those who don’t happen to have a complete collection of SURFER a look at this lost linear timeline of surfing and surf culture, depicting it the way SURFER did so amazingly well, decade after decade. Hopefully I got it right.”

Editor’s Note: SURFER Magazine 1960 – 2022 can be ordered on Amazon, Rizzoli or directly from (and signed by) Grant himself, at grantellisphotography.com