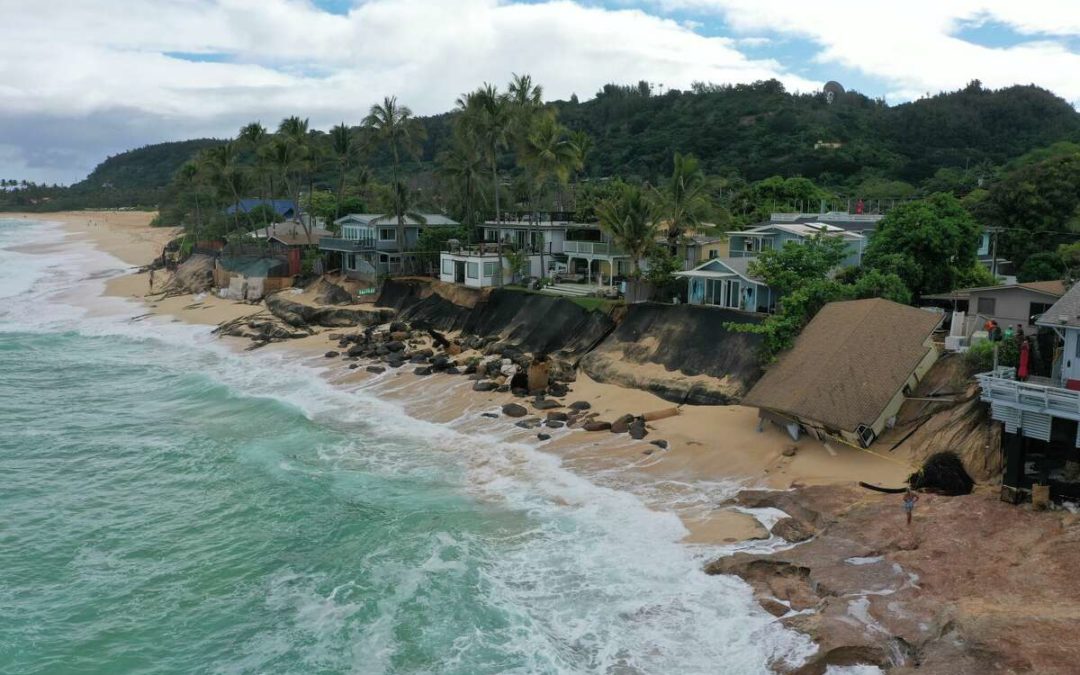 A Rocky Point house on Oahu’s North Shore collapsed onto the sand early Monday morning, broadcasting a stark warning to other residents nearby.

Many of the beachfront homes on the North Shore are built on sand berms, and as storms get more powerful, that sand is being removed. This has been a particularly swell-filled winter, and the destruction of the home has other homeowners on high alert.

The resident of the house on Ke Nui Road, Hugo Villalobos, had called the place home for three decades. According to Hawaii News Now, Villalobos wasn’t all that worried the evening before his house fell into the sand. But when a friend advised him to stay in the back house on Sunday night, he decided to heed their warning.

As he sat in the back house listening to the waves crash into the crumbling foundation that held his home up, he knew it was bad.

The next morning, the extent of the damage was laid bare in the morning sun. The entire house had fallen onto the beach below.

“I just seen the house like this and it just broke my heart. It’s terrible,” he said. “I’m glad that I escaped with not getting hurt or killed.”

Although Villalobos had been looking at different options to shore up the eroding foundation, he came up against a wall of red tape. The State of Hawaii has policies in place that favor the natural coastline over the homes perched above it.

“They said don’t don’t do sandbags, don’t do concrete,” said Villalobos. “You know, the state says you can’t do (it) so what happens, I guess when you abide by the rules. But the rules were the rules and we just kept to them and unfortunately it turned out the wrong way.”

Authorities at the state Department of Land and Natural Resources (DLNR) said the collapse is a “dramatic example of climate issues.”

On Monday afternoon, DLNR Chair Suzanne Case went to inspect the damage. “This is a terrible situation,” she said. “We feel badly for the homeowner and everybody who lives along this stretch. This has been a long time coming. We knew it was going to happen eventually. It’s a dangerous situation, as debris is falling into the ocean.”

According to Case, the state now has a responsibility to keep the debris from entering the ocean, which could be dangerous to the surfers and swimmers who frequent the area. She went on to lay the blame at the feet of our rapidly changing climate and all the issues that come with it. She believes that there isn’t a long-term solution aside from moving the homes.

“This is sad,” Case said. “Climate change, sea level rise, and wave energy in new powerful patterns. This is a beach that’s important to everyone. The houses are built on sand berms and there’s just no way they can last long-term. We continue to encourage the homeowners here to seek other alternatives.”

The DLNR explained in a press release that temporary protection measures are just that: temporary.

“Generally, these geological features are known to be transient, and this is especially true for the North Shore since it is influenced by some of the most extreme wave energy in the world,” the press release read. “Temporary mitigation measures, like sand burritos and sand pushing, are only able to provide temporary protection to buy time to get to permanent solutions.”