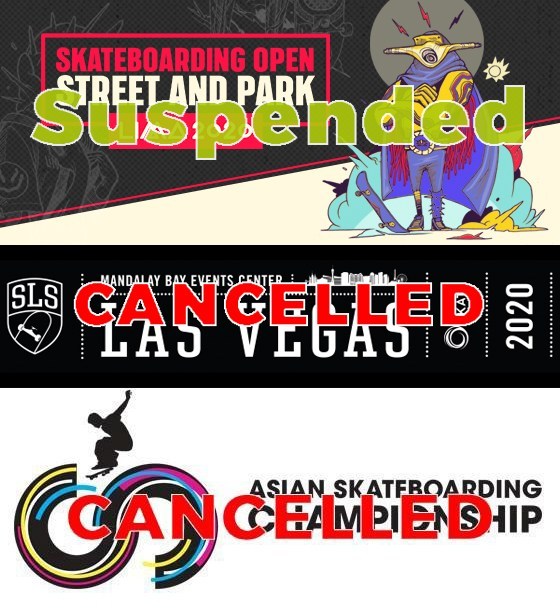 Editor’s Note: USA Today just confirmed that the Olympics have been postponed until 2021. This story highlights the cancellations prior to this news and the Hierarchy of the Olympics.

On March 13, 2020, the World Skate site provided an update regarding the Olympic qualifying schedule. As you would expect, all of their events are either cancelled, or suspended, or are under consideration to be cancelled or suspended:

“Following the recent increased provisions around the world to contain the Coronavirus (COVID-19), please find a new update below on Skateboarding Olympic Qualification Events planned before the end of April 2020.”

Date: 21- 26 April 2020
World Skate is currently assessing with the Local Organizer the impact of the new provisions on the event, and the ability for athletes to enter the country, practice and compete.

First, is there even going to be an Olympic Games this year? The International Olympic Committee (IOC) has not cancelled them yet, and I’d be surprised if they do, so, probably. I base this on evidence that everyone involved with the IOC is so greedy and corrupt that even a nuclear holocaust wouldn’t be cause to cancel. (The IOC’smost recent statement says that they “remain fully committed to the Olympic Games Tokyo 2020.”)

Second question: if there is an Olympic Games in 2020, will there be a Skateboarding event? Because the IOC is a real stickler for the rules surrounding their qualifying events and right now it doesn’t look like World Skate is going to be able to hold any of their remaining events. If World Skate doesn’t meet the IOC’s qualification criteria, no Olympic Skateboarding, right?

I think that would benefit Skateboarding, but, as aforementioned, the IOC is a very corrupt and greedy organization so I’m sure they’ll figure out some way to get around a rule here and make an exception there. They’ll either end up reducing the number of World Skate’s remaining qualifying events, or they’ll just abandon it altogether and base qualification on current standings.

They’ll figure it out somehow. Because remember when the Olympic Games were hosted by Germany in Berlin back in 1936 and that dictator guy was in power, but they held the event anyway? Or, memmer when 11 hostages were murdered in Munich in 1972, but the Games kept going? Or what about that time 65 nations boycotted the 1980 Olympics in Russia, but they didn’t cancel it?

Yeah, the Games will go on.

As an added bonus to this post, I thought I’d try to provide some educational material because I’ve noted some confusion surrounding these Olympic Skateboarding posts. Most of the confusion seems to lie in a difficulty to understand the Olympic hierarchy and an inability to keep up with the acronyms for all of the international federations, national federations, committees, governing bodies, associations, etc.. Don’t worry, it’s not you, it’s me—or, more precisely, them: the Olympics. I’ve been loosely following this Olympic Skateboarding nonsense for 20 years and I still don’t understand the byzantine labyrinth that is behind the Olympic Games. They’re horrible.

That said, I thought a visual diagram of the Olympic governing structure might be of benefit to anyone who is having trouble following this very confusing story:

First, I shared the above diagram with USA Skateboarding (USAS) TM, Mark Waters, for approval. Mark’s response was (and I paraphrase): it’s not incorrect, but it’s not complete.

I’m fine with that because my purpose here is to simplify the very complicated Olympic governing structure. So please keep that in mind when reviewing this diagram—it is incomplete because it was made by a caveman in very broad strokes.

FIRST (TOP) ROW: The International Olympic Committee (IOC)
A corrupt organization comprised mostly of old, rich white men based in Lausanne, Switzerland. Despite recording billions of dollars in revenue, they are somehow a “non-profit” organization. The list of Olympic scandals is so long, and covers so many areas of the Olympics that it’s impossible for me to list them here. I will only say that corruption is something the Olympics are not unfamiliar with and dates back to ancient times: the boxer, Eupolos of Thessia, for instance, bribed three of his competitors to take dives at the Games in 388 BC.

While the Olympics like to claim that their official goal is “to place sport at the service of the harmonious development of humankind, with a view to promoting a peaceful society concerned with the preservation of human dignity,” the truth is cheating and corruption are part of their DNA.

Anyway, the IOC is at the top of the food chain and they’re the group that ultimately runs the whole shit show.

SECOND ROW: International Sports Federation (ISF)
An ISF, also known as an international governing body (IGB), is the apotheosis of administration for every sport. In my diagram, there are five examples, but in reality In my diagram, there are five examples, but in realitythere are dozens. Some ISFs, like Badminton, govern just their one sport, but others, like Swimming (Federation Internationale de Natation, or FINA—many of the ISFs have their origins in France and so their acronyms are also in French, thus adding to the Olympic confusion—like, “Swimming?” Where’s the S in FINA?) oversee multiple disciplines. Besides traditional swimming races, FINA has committees that govern diving, synchronized swimming, and water polo. The International Surfing Association (ISA), another example, governs Olympic Surfing, but they are also the ISF for body boarding and standup paddle boarding, both of which are not Olympic disciplines.

Olympic Skateboarding belongs to the ISF known as World Skate.

[Note: this is one area of the diagram that is notably incomplete because I have not included the Global Association of International Sports Federations (GAISF—previously known as SportAccord). GAISF is essentially a union for all of the ISFs and is separate from the IOC. Not only is every Olympic ISF a member of GAISF, but the GAISF is also home to federations for sports that are not yet, but soon hope to be, Olympic sports. The World Bridge Federation and the International Chess Federation are members, for example. Wait—the International Fistball Association? What the fuck is fistball? Anyway GAISF is a very powerful organization in the Olympic landscape.]

THIRD ROW: World Skate
While it’s not said anywhere in World Skate literature, it is generally understood to be “The International Governing Body Of Rollersports.” They govern a dozen different Rollersports from scooters, to inline hockey—none of which are, or are likely to ever be, Olympic sports. Despite the fact that not a single person at Rollersports has ever stepped on a skateboard, or knows anything at all about skateboarding, they proclaimed themselves the governing body of Skateboarding back in the late 90s.

World Skate’s organizing structure is, however, backwards. In the International Surfing Federation, for instance, the members of the primary discipline, Surfing—the one discipline in the Federation with Olympic status—are the ones governing the organization. Body boarding and SUP are also part of the ISA, but they are not Olympic sports, are less popular than surfing, and thus their committees are secondary. In World Skate, the only sport with Olympic status, Skateboarding, is being governed by individuals who are not skateboarders.

FOURTH (BOTTOM) ROW: National Governing Bodies (NGB)
So, to recap, the ISF that controls all rollersports, including Skateboarding, is World Skate. The international skateboarding committee within World Skate, then, oversees all of the National Governing Bodies. Here I have provided five examples from Latvia, Brazil, USA, Finland, and the UK, but, again, there are many more.

Every country has its own NGB for Skateboarding. Here, in the US, the NGB for skateboarding is USA Skateboarding (USAS), which is also a part of the larger US Olympic Committee (USOC) that oversees all US Olympic sports’ governing bodies—for US Skiing, for US Swimming, US Gymnastics, etc..

Fortunately, here in the US, our NGB, USAS, is independent of World Skate. While we are ultimately a part of World Skate, we don’t answer to them directly—we are more beholding to the USOC. But that is not the case in every country. As I’ve mentioned in previous articles, World Skate has actively tried to block and/or weaken any skateboarding NGB that is not controlled by them.

Certainly the spread of the recent Coronavirus has contributed to the list of failures World Skate has been experiencing, but one can’t help wonder if World Skate’s own ham-fisted attempts at trying to “govern” skateboarding, coupled with their ignorance of skateboard culture, their disregard of the skateboard ecosystem, and their hubris isn’t also to blame? The word “karma” comes to mind.

We’ll be taking a closer look at World Skate’s recent activity in the next couple of posts. In the meantime, please memorize the Olympic hierarchy diagram.