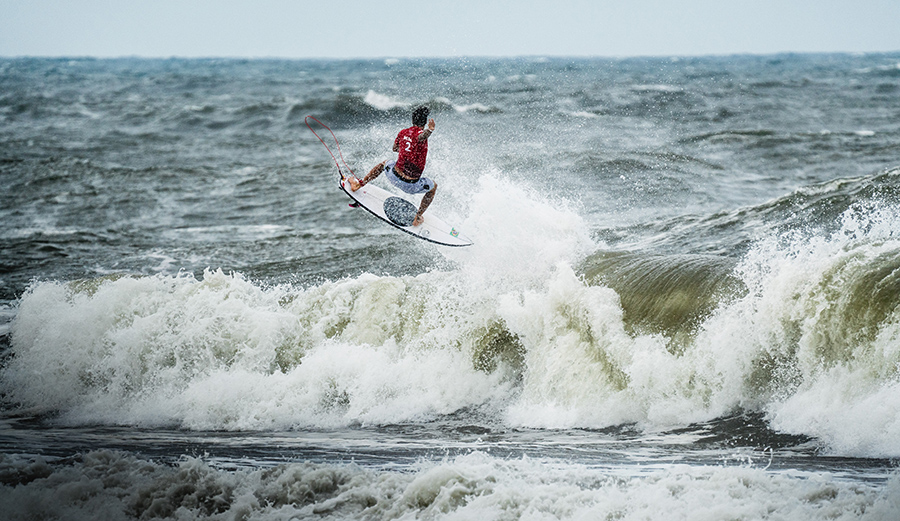 Medina making the most out of sub-par conditions. Photo: Pablo Jimenez/ISA

Well, surfing’s Olympic debut is in the books. It’s done and dusted. Duke Kahanamoku’s dream came to fruition. The best surfers in the world competed for Olympic medals in front of a relatively diminished audience, and our very own Joe Carberry was on the ground reporting. The surfing world was joined by the non-surfing world to watch the biggest competition on the planet. And I for one am disappointed.

I wanted surfing’s great reveal to the world to be staggeringly good. I wanted huge, throaty tubes, blown eardrums, and knee-buckling aerials. I wanted a showcase of what surfing can be, not a showcase of what surfing looks like when you drive by a beach on an average day. Ever since the initial announcement of the contest site, the wave quality was a concern. And when the contest kicked off, it appeared the naysayers were right.

Imagine, just for a second, that skateboarding’s Olympic reveal was held in a parking lot with a few curbs, a rattle-trap plywood ramp, and a rail made from a chunk of broken staircase railing. Certainly, the best skateboarders on Earth could do things there that the average skateboarder couldn’t, but it’s the Olympics. To perform at the highest level, they need a playing field worthy of their talents.

The waves in Japan weren’t bad, not on the final day. If I pulled up to waves like the on the final day, I’d be sprinting across the sand as fast as my legs could carry me — at least the start of the final day, before the wind got on it. But I am an average surfer. I hold the world’s best to higher standards, and the waves on the days leading up to the finals were definitely not good. Even though the waves on finals day would be considered good for the Average Joe, the waves necessary to showcase the abilities of the best surfers in the world should be as close to flawless as possible.

Now, I don’t know what the solution for this is. A wave pool? Maybe. A longer waiting period? Maybe that, too. Is surfing in the Olympics just too much of a gamble to guarantee the waves are going to be good enough for the best in the world to show what they’re really able to do? Possibly. Whatever the case may be, surfing’s debut in the Olympics didn’t offer the world’s best conditions. Given the gravity of the event, that feels like a demanding but reasonable ask. But man oh man, am I ever looking forward to 2024 and Teahupoo.

Be sure to bookmark https://www.theinertia.com/ and check back often for other intelligent surf related news and resources.  Speaking of resources, be sure to click on the following link to view an outstanding article from The Inertia about BRA Supporting Vendor Partner Surfcare: https://www.boardretailers.org/you-might-not-need-to-worry-about-breaking-a-brand-new-surfboard-ever-again-via-the-inertia/