“Patagonia: Conscious Capitalism” by Robin Lewis via The Robin Report 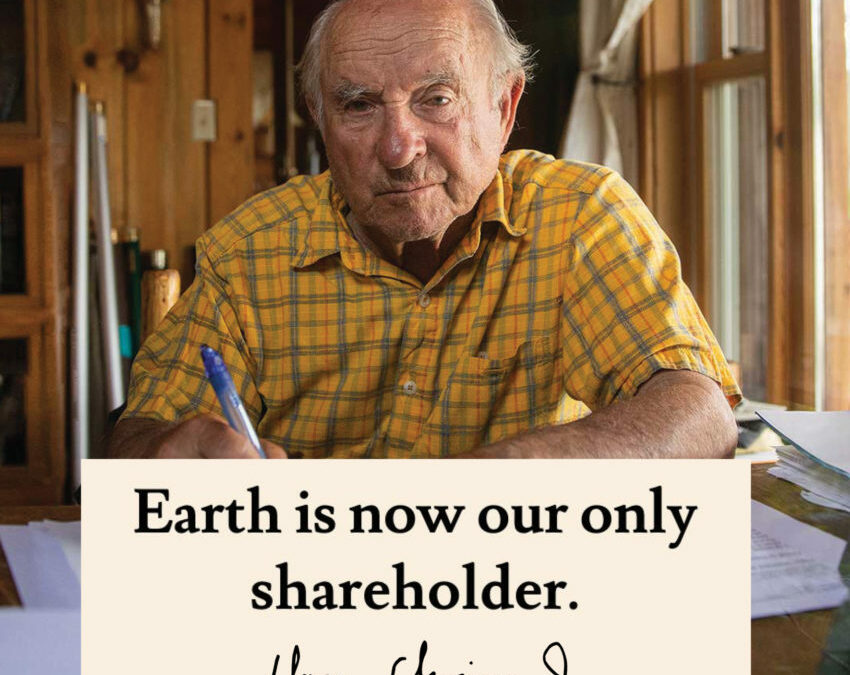 I’m offering yet another report on Patagonia that I’m tossing into the ring, now full of one adulatory article or broadcast interview after another. However hesitant I was to follow lemming-like this cascade of applause for Patagonia’s founder Yvon Chouinard, I believe there are not even enough lemmings in the world to drive home the fact that he authentically “walks the walk.” His donation of his entire $3 billion business to planet Earth is not only unprecedented, but also a powerful example of how capitalism can thrive while simultaneously sharing its profits with a cause; Patagonia’s mission is nothing less than to fight the existential threat of climate change.

I hope all the “talkers,” faking their support of this very real threat, which is already killing too many species, including human beings, will add agendas to their next board and management meetings to develop strategic plans to participate in whatever way is relevant to their particular business model. If simply throwing money at the cause is the only way possible, then so be it.

The West Coast is on fire. The East Coast coastal communities are at risk from sea rise. And the middle and southern states are either being sucked up by tornadoes and swimming in floods or dehydrating in drought. And temperatures are record-breaking weird. The rest of the world is in no better shape.

Am I preaching? Yes. The West Coast is on fire. The East Coast coastal communities are at risk from sea rise. And the middle and southern states are either being sucked up by tornadoes and swimming in floods or dehydrating in drought. And temperatures are record-breaking weird. The rest of the world is in no better shape.

Earth Is Now Our Only Shareholder

Chouinard headlined “Earth is now our only shareholder” in an open statement. He also said, “If we have any hope of a thriving planet—much less a business—it is going to take all of us doing what we can with the resources we have. This is what we can do.” For anyone not familiar with the iconic outdoor apparel and footwear brand, you must have been living in another universe for the last half century. Chouinard’s grand proclamations and establishment of the living trust for planet Earth might be suspect of hyperbolic altruism. However, this brand and its indelibly unique culture and leadership have, since inception in 1973, been walking the environmental walk. And they’ve been doing it in every possible way including using organic cotton and more sustainable fibers and textiles and reducing the amount of harmful dyes, while not sacrificing the best competitive quality in their performance wear space. They have a circular resale program and they accept returns for any product that did not perform, and they repurpose these returns into new apparel.

Patagonia CEO, Ryan Gellert, told CNBC’s “Squawk Box,“ I think what people fail to understand about Patagonia, both the past and today and the future, is that we are unapologetically a for-profit business. The Chouinards are extremely competitive about the business. We focus on making high-quality products, standing behind that product for the usable life of it. We compete with every other company in our space, aggressively. I don’t think we have lost that instinct. That also means that pay and compensation of employees will not suffer, and I think this whole thing would fail if we don’t continue to run a competitive business and included in that is taking care of our people.”

Why This? And Why Now?

As the drumbeat of climate deterioration gets louder and more persistent, the timing of this bold move, both symbolically and for real, could not be better. Granted in the grand scheme of things, a $3 billion gift to Mother Earth, along with a roughly $100 million annual share of profits, may just be a token of what will be needed over the time it will take to neuter the threat. However, visibly it might awaken the global business world that this kind of commitment is something that they can follow within their own unique models: small, medium, or large.

And what struck me was Patagonia’s internal discussion that started a couple of years ago debating taking the company public or selling a stake in the company to investors. Gellert said, “We had very little confidence in meeting with quite a few potential investors that the integrity of the company would be protected.”

Hooray for common sense! Which most companies throw out the window, or worse, they replace common sense with greed, or should I say, in their lexicon, greed IS common sense.

In his low-key, honest style, Chouinard said, “Another path was to take the company public. What a disaster that would have been. Even public companies with good intentions are under too much pressure to create short-term gain at the expense of long-term vitality and responsibility. Truth be told, there were no good options available. So, we created our own. Instead of “going public,” you could say we’re “going purpose.” Bravo!

Patagonia is putting the shares of the company into two trusts, the Patagonia Purpose Trust, which holds all the voting shares (2% of the total), and the Holdfast Collective, which holds the remaining, nonvoting shares. The Patagonia Purpose trust is dedicated to maintaining the company’s values and the Holdfast Collective is a nonprofit dedicated to fighting the environmental crisis and defending nature.

While naysayers of this lofty intent cite the tremendous tax break that will occur, Gellert said, “Patagonia leadership was expecting the discussion of the tax benefit of their new structure, but tax avoidance was never part of the decision to give the company away. With the family, it was very clear from the beginning. There were two goals that were focused on: Create a structure that could ensure the integrity and the values of Patagonia and cash flow the environment in more meaningful ways now.” He also said, “We are actually one of the few companies that have lobbied consistently and publicly for higher taxes particularly in support of climate legislation.”

Professor Theodore Levitt, Are You Listening?

Theodore Levitt, author of the seminal thesis and book, Marketing Myopia, opined that most business leaders need to broaden their answer to the question: “What business are you in?” Chouinard’s answer is brilliant: “We’re in business to save our home planet.” He expanded, “While we’re doing our best to address the environmental crisis, it’s not enough. We needed to find a way to put more money into fighting the crisis while keeping the company’s values intact.”

“It’s been nearly 50 years since we began our experiment in responsible business, and we are just getting started. If we have any hope of a thriving planet—much less a thriving business—50 years from now, it is going to take all of us doing what we can with the resources we have. This is another way we’ve found to do our part. Despite its immensity, the Earth’s resources are not infinite, and it’s clear we’ve exceeded its limits. But it’s also resilient. We can save our planet if we commit to it,” states Chouinard

The “we” includes you and me. Patagonia is the real deal and has been so for its lifetime. We need more visionary leaders like Chouinard who know how to balance profit with purpose and have a North Star that keeps them authentic, transparent and uncompromisingly honest. Patagonia is a role model for any business and validation that doing well is also doing good.

Robin Lewis is the founder and CEO of The Robin Report. He is an author, speaker, and consultant for the retail and consumer products industries.

He co-authored the book: “The New Rules of Retail.” As a VP at Goldman Sachs, he launched a retail consulting practice. Prior to this, he was an EVP and Executive Editor at WWD, and a VP of Strategy and Business Development at the VF Corporation.

He is frequently requested by C-level management for advice, consultation and strategic presentations: among them are Kohl’s, Bloomingdale’s, JC Penney, Macy’s, Liz Claiborne, VF Corp., Charming Shoppes, Estee Lauder, Ralph Lauren, and Sara Lee, as well as financial firms such as Lion Capital, The Carlyle Group, Goldman Sachs and others. And he’s often quoted in all of the major print and broadcast media: Bloomberg/BusinessWeek; WSJ: Fortune; Forbes; CNBC; CBS; Fox Business; among others.