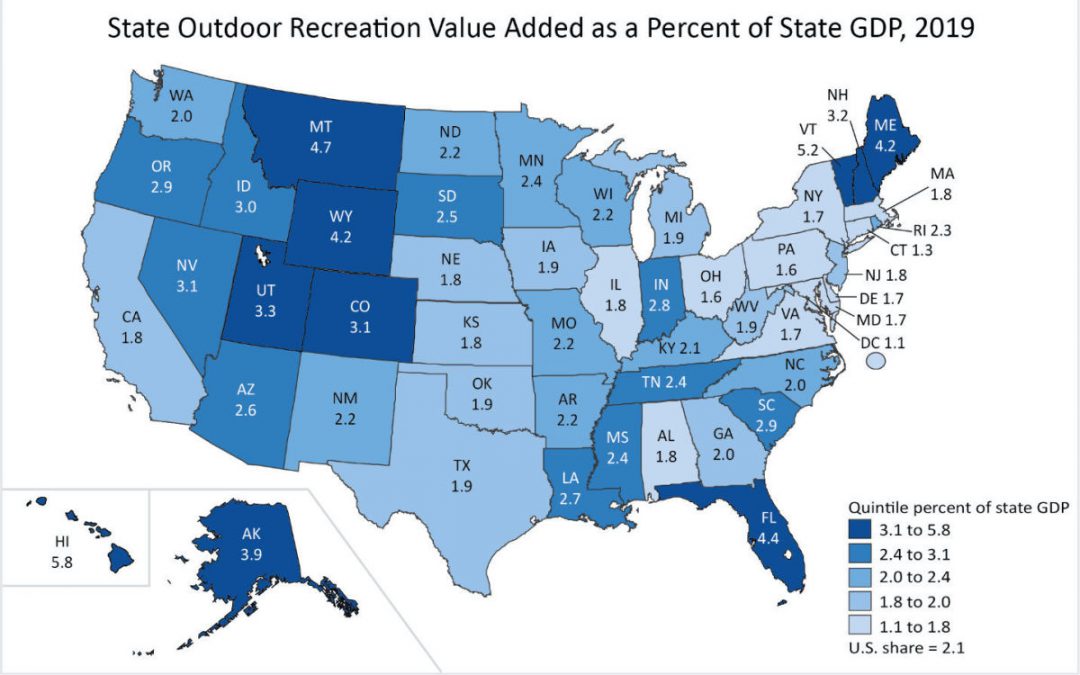 The U.S. Bureau of Economic Analysis released its annual report that lays out the importance of the outdoor recreation economy in hard data.

The numbers are in.

The U.S. Bureau of Economic Analysis (BEA) came out with its annual report today dissecting the importance of the outdoor economy across the nation. Officially an analysis of the agency’s Outdoor Recreation Satellite Account, which measures “economic activity as well as the sales or receipts generated by outdoor recreational activities” across the country, the report laid out in clear terms just how crucial outdoor recreation remains to state economies from coast to coast.

Across the board, the upshot was positive. The BEA’s report found that outdoor recreation contributed to the economies of all 50 states and accounted for 2.1 percent ($459.8 billion) of current-dollar gross domestic product and $788 billion in gross output (consumer spending) in 2019.

According to a recap of the study published this morning by the Outdoor Recreation Roundtable, it is likely these figures will be even higher for 2020, given the rise in outdoor participation during the pandemic.

Lise Aangeenbrug, executive director of OIA, said after the release of the data, “The report published today proves that together, we are a force. The industry is a vital component of national, state, and local economies, as well as an important catalyst to America’s economic recovery.”

Here’s what we learned from the numbers.

States that benefited most from the outdoor economy

The states that saw the highest value-add from outdoor recreation as a percentage of state GDP were clustered in the Intermountain West and the Northeast, with several key outliers in Hawaii, Alaska, and Florida. The top states to benefit most from the outdoor economy in 2019 came in as follows.

*value-add from outdoor recreation in 2019, as a percentage of state GDP

On the flip side, the states that benefitted least were clustered in the Midwest and parts of New England. Washington, D.C., measured apart from the other 50 states, came in last.

*value-add from outdoor recreation in 2019, as a percentage of state/district GDP

What’s included in the definition of “outdoor recreation”

It’s important to note that “outdoor recreation” in the BEA’s report differs—slightly—from how the outdoor industry typically defines it.

Read more: SIA data gives a glimpse into the future of the snow sports industry

Among conventional activities, boating/fishing added the most money to the economy at $23.6 billion in current-dollar value added. In 30 states, as well as in Washington, D.C., boating/fishing was the most valuable conventional outdoor activity in terms of GDP value-add, with Florida ($3.3 billion), California ($2 billion), and Texas ($1.7 billion) contributing the most to the overall GDP boost.

Second through fifth place went to categories adjacent to our core industry—RVing, hunting/shooting/trapping, ATVing/motorcycling, and equestrian, in order.

Also encouraging was the fact that, across the board, the report shows outdoor employees doing better than they did the previous year. Employment in the outdoor space rose by 0.4 percent in 2019, and compensation for those employees increased by 3.9 percent overall.

Breaking down the national outdoor industry GDP value-add in 2019, the report shows that 21 percent of the benefit came from retail trade. At the state level, retail was the largest contributor to outdoor recreation value-add in 13 states, and the second largest in 32 states.

Comparison to past data

2019’s report wasn’t quite as rosy as the last couple that have come out. In 2018, the BEA showed a 2.2 percent contribution to national GDP coming from the outdoor sector, outpacing growth of the U.S. economy overall. 2017 was similar. In 2019, the outdoor economy grew at a slightly slower clip than the U.S. economy at large.

The numbers are still encouraging, however, and as OIA noted this week, figures for 2020 and beyond are likely to grow at an accelerated rate, given the spike in outdoor participation during the pandemic.

Andrew Weaver is associate editor at SNEWS and The Voice.

SNEWS is an outstanding source for outdoor, snow sports, and adventure travel news. Be sure to visit and bookmark SNEWS