“Retail Moves From ‘The Great Acceleration’ To ‘The Great Rebalancing’.” by Steve Dennis via Forbes 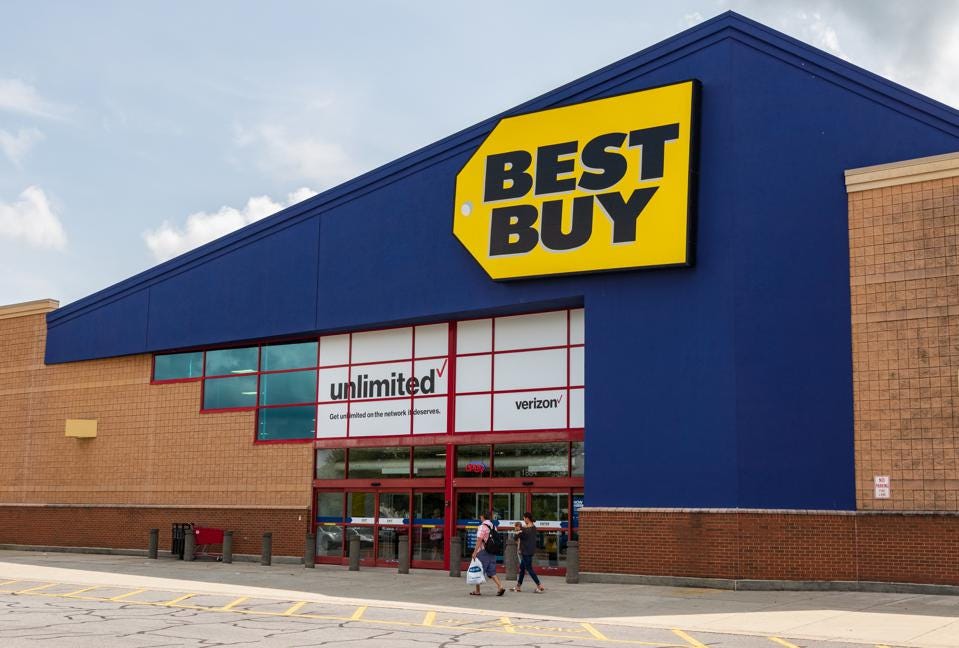 A Best Buy store, a retailer of consumer electronics, operating in the U.S., Canada and Mexico.GETTY

During the early part of the pandemic, it became popular to say that we had experienced 10 years of e-commerce growth in only 10 weeks. While that was rather obviously not close to being true, the idea of a “great acceleration” in just about all things retail made its way into the popular vernacular. Moreover, many media outlets and retail pundits declared that some trends—most notably grocery home delivery—were permanent sea changes. As it turns out, not so much.

While it’s clear that some important shifts did occur during the Covid crisis, it’s also quite apparent that right now we are experiencing much more of a “great rebalancing” and a rather clear return to more familiar shopping patterns.

As revealed in the today’s US Census Bureau monthly sales data report, spending in the areas with the greatest activity spikes over the past two years are almost all decelerating significantly, and the most pronounced spending shifts of the recent past are seeing a reversion closer to the mean.

For example, big ticket purchases and fitness equipment outlays that had been way up, are now seeing year over year declines. Apparel and restaurant spending, which had been hard hit during the depths of Covid, are both now registering solid gains. The rate of increase in eating out now greatly exceeds food purchases for the home, bringing us closer to the pre-Covid relative share of spending.

As more data comes in, the supposed massive acceleration of online shopping is now turning out to be closer to one or two years in most categories—and one could argue it’s even lower when you consider the important distinction between something being ordered online but actually fulfilled from a brick-and-mortar store. There is also growing evidence that the boom in online grocery shopping—whether home delivered or picked-up curbside, is subsiding markedly.

This rebalancing, along with a growing (but eminently predictable) shift of consumer spending away from products to services, seemed to inexplicably catch quite a few retailers by surprise. As many companies work to aggressively lower their inventory levels, we may witness uncharacteristic shopping patterns in the goods most likely to be hit with steep markdowns in the coming months. But this too shall pass.

The sky-high rate of inflation will also muddy the purchasing activity picture for the foreseeable future. For quite some time it generally could be surmised that if sales dollars were up that meant the number of units purchased were up as well. This relationship no longer holds true in many categories. Given that the elasticity of demand can vary widely by customer type and the nature of the goods being purchased, it will be harder to parse shifts in consumer behavior with great precision until rampant inflation is tamed.

While hyperbole may be the greatest thing ever, it’s often the case that click-bait headlines should be ignored, or at least scrutinized with a high level of discernment. And always remember that your mileage may vary.

Steve Dennis is strategy and innovation consultant, speaker, podcast host and the best-selling author of Remarkable Retail: How to Win and Keep Customers in the Age of Disruption. He has delivered keynote speeches on six continents, been named a top retail influencer by multiple organizations and his thoughts on the future of shopping are regularly featured in the media.  Prior to founding his own advisory firm, he was the Senior Vice President of Strategy & Multichannel Marketing for the Neiman Marcus Group. Steve received his BA from Tufts University and an MBA from the Harvard Business School.