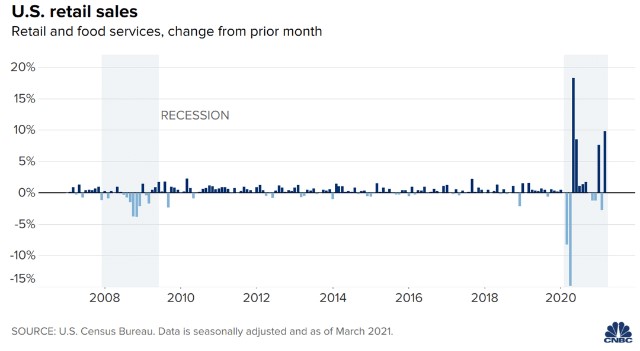 Retail sales surge in March as consumers use stimulus checks

A fresh batch of stimulus checks sent consumer purchases surging in March as the U.S. economy continued to get juice from aggressive congressional spending.

Advance retail sales rose 9.8% for the month, the Commerce Department reported Thursday. That compared to the Dow Jones estimate of a 6.1% gain and a decline of 2.7% in February.

Sporting goods, clothing and food and beverage led the gains in spending and contributed to the best month for retail since the May 2020 gain of 18.3%, which came after the first round of stimulus checks.

A separate report showed first-time filings for unemployment insurance plunged, with the Labor Department reporting 576,000 new jobless claims for the week ended April 10. That was easily the lowest total since the early days of the Covid-19 pandemic and represented a sharp decline from the previous week’s total of 769,000.

As the jobs picture brightened, consumers took their $1,400 stimulus checks and spent aggressively. The money came courtesy of the nearly $1.9 trillion American Rescue Plan Act that Congress passed in March.

The legislation took total stimulus and rescue payments approved in the year since the pandemic began to about $5 trillion, fueled by red ink that fiscal authorities say is necessary to keep the economy running.

Spending for the month was broad-based, boosting sales by nearly 28% from March 2020 as pandemic-related business closings began.

The critical bar and restaurant industry saw a 13.4% surge, thanks to the increasing relaxing of restrictions as Covid vaccines accelerate to a pace of more than 3 million a day. Sporting goods spending was the highest percentage gainer at 23.5%, followed by clothing and accessories at 18.3% and motor vehicle parts and dealers at 15.1%.

March’s retail sales report was another sign that consumers overall are willing to spend, even though increasing amounts of stimulus checks are going towards savings rather than spending.

“Spending will almost certainly drop back in April as some of the stimulus boost wears off, but with the vaccination rollout proceeding at a rapid pace and households finances in strong shape, we expect overall consumption growth to continue rebounding rapidly in the second quarter too,” wrote Michael Pearce, senior U.S. economist at Capital Economics.

A recent report from the New York Federal Reserve indicated that stimulus recipients expect to save 41.6% of their checks and spend 24.7%. Following the first round of checks in the spring of 2020, consumers saved 34.5% and spent 29.2%.

As the recovery has gained speed, consumers have had to deal with the strongest signs yet of inflationary pressures building. The consumer price index rose 2.6% in March from a year ago, thanks in part to a surge in gasoline prices. The year-over-year gain was the largest since August 2018.

WATCH NOWVIDEO03:18Initial jobless claims come in at 576,000, lowest since early days of pandemic

The plunge in jobless claims generated the lowest weekly number since March 14, 2020, just after the official pandemic declaration. Nearly two weeks later, weekly claims filings would top out at a staggering 6.15 million, easily the worst week in U.S. history.

Since then, the jobs market has improved dramatically, with the unemployment rate falling from a pandemic peak of 14.7% to its current 6%. The nonfarm payroll addition of 916,000 in March brought more hope that the healing is accelerating.

Despite the big decline in weekly claims, continuing claims were little changed at 3.73 million.

The four-week moving average for weekly claims declined to 683,000, also the lowest since March 14.

The total for those receiving benefits under all government programs tumbled by more than 1.2 million to 16.9 million for the week ended March 27. That decline came mostly due to drops in those filing under pandemic-related programs.

A pair of other economic indicators also turned in much stronger readings than expected.

The Philadelphia Fed’s manufacturing survey registered a reading of 50.2, representing the difference between firms reporting expansion vs. those seeing contraction. That was well ahead of the Dow Jones estimate of 42 and the highest reading since March 1973.

At the same time, the Empire State Manufacturing survey came in at 26.3, its highest since October 2017 and better than the Dow Jones estimate of 20.

CNBC is the recognized world leader in business news and provides real-time financial market coverage and business content consumed by more than 355 million people per month across all platforms. The network’s 14 live hours a day of business programming in North America (weekdays from 5:00 a.m. – 7:00 p.m. ET) is produced at CNBC’s global headquarters in Englewood Cliffs, N.J., and includes reports from CNBC News bureaus worldwide. CNBC at night features a mix of new reality programming, CNBC’s highly successful series produced exclusively for CNBC and a number of distinctive in-house documentaries.