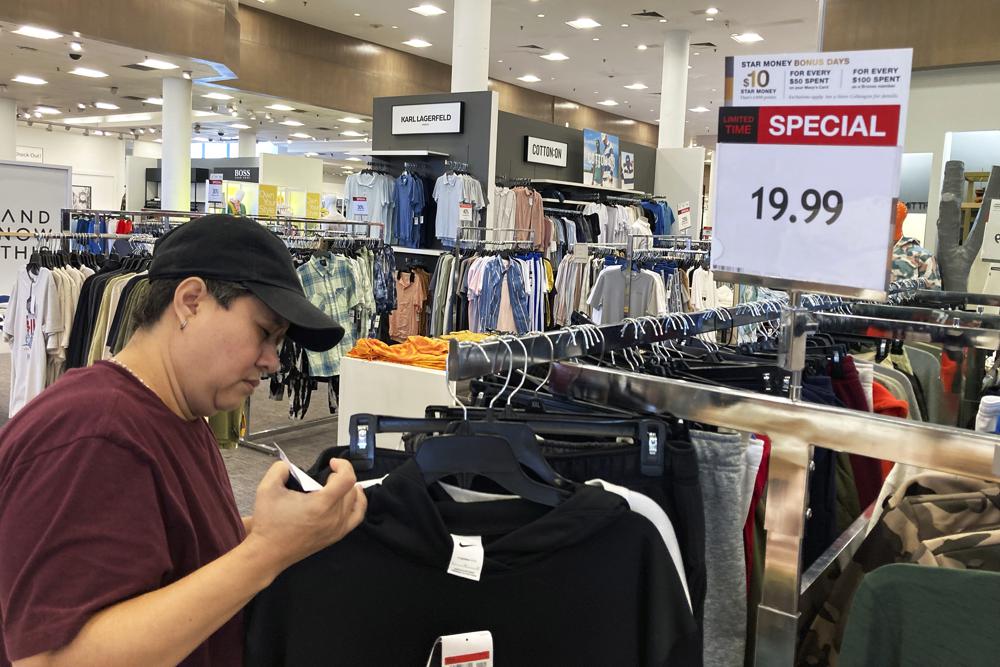 NEW YORK (AP) — After going on a frenzied hiring spree for a year and a half to meet surging shopper demand, America’s retailers are starting to temper their recruiting.

The changing mindset comes as companies confront a pullback in consumer spending, the prospect of an economic downturn and surging labor costs. Some analysts suggest that merchants have also learned to do more with fewer workers.

The nation’s top employer, Walmart, said it recently over-hired because of a COVID-related staffing shortage and then reduced its head count through attrition. In April, Amazon said it, too, had decided that it had an excess of workers in its warehouses. And FedEx, whose customers include big retailers, said late last month that it was hiring fewer people.

In addition, new data shows that retailers in recent months have been scaling back sign-on bonuses and are no longer relaxing job requirements — a sign that they no longer feel compelled to expand their applicant pool, according to the labor analytics company Lightcast. And Snagajob, an online marketplace for hourly work, reports that job postings in retailing have been slowing in the past couple of months, though they remain up from a year ago.

Retailers “are going to take a conservative view of what’s possible and what’s necessary, because the price they will pay for being wrong will be minimum if they run out of goods and don’t have enough staff, and massive if they wind up with an inventory glut and they have too many people employed,” said Mark Cohen, director of retail studies at Columbia University and a former CEO of Sears Canada.

The easing of retail hiring is happening in a labor market that has undergone volatile swings throughout the recovery from the pandemic recession of 2020. Early on, companies like Amazon, Target and Walmart that provide necessities and goods for the home stepped up their hiring to meet a crushing demand from online shoppers. At the same time, stores like Macy’s and Nordstrom whose clothing lines were considered non-essential by many at the time, temporarily laid off workers during nationwide lockdowns.

The pullback in retail hiring comes against the backdrop of a still-robust national job market. On Friday, the government is expected to report that America’s employers added 275,000 jobs in June, according to economists surveyed by the data provide FactSet. That would amount to a solid gain, though it would be the smallest monthly total in more than a year. It would suggest that the pace of hiring may be easing — something the Federal Reserve has been hoping for as it looks to slow the economy and curb high inflation.

The unemployment rate for June is expected to have remained 3.6%, just above the half-century low that preceded the pandemic and a sign that the demand for workers, economy-wide, is still strong.

The job market became extremely tight starting in the spring of 2021, after the country emerged from the lockdowns and people, many of them newly vaccinated, were eager to shop and dine out again. At the same time, many workers were reassessing their jobs and whether the long hours were worth the paycheck, and some decided not to return to their employers.

In May, the retail industry shed about 61,000 positions, though overall employment in the sector is still 159,000 above its pre-pandemic February 2020 level. Jack Kleinhenz, chief economist at the National Retail Federation, the nation’s largest retail trade group, said he believes the decline is more of an aberration. In a most recent report on job departures, he noted, there were 1.1 million retail job openings even while about 730,000 people in retail were receiving unemployment benefits. That meant that retail job openings vastly exceeded the number of people claiming unemployment benefits.

But shifting consumer behavior is already weighing on retailers and other types of businesses as well. Netflix and Peloton have announced layoffs, for example while technology behemoths like Facebook’s parent Meta Platforms Inc. and Uber Technologies say they have moderated their hiring plans. Such a pullback, if replicated elsewhere, might herald a broader scaling-back of hiring across the economy and, eventually, help slow the economy and ease high inflation.

The latest round of retail earnings reports show how surging inflation in gas and other necessities is making shoppers, particularly lower-income households, avoid discretionary purchases and focus more on basics. The Fed’s recent interest rate hikes, meant to curb inflation, should depress spending even more by making it more expensive for consumers and businesses to take out loans. Shoppers have increasingly shifted away from purchases they spent heavily on during the pandemic for their home, like appliances and furniture, to services like restaurants as dining out becomes normal again.

With online shopping slowing, some affected retailers are retrenching. Amazon, which doubled the size of its operations and nearly doubled its workforce in the past two years, is letting some of its warehouses leases expire and deferring construction on others, according to CEO Andy Jassy. The e-commerce giant also reportedly plans to sublease its excess space. Experts say Amazon and others may decide to find uses for their excess labor as the holiday shopping season approaches.

In the meantime, plenty of small businesses are lagging behind in hiring compared with their bigger rivals. Squeezed by supply chain disruptions and labor shortages, many smaller retailers were unable to stock enough merchandise or hire enough people.

“They’re still clawing their way back, whereas some of these over-large companies are now discovering they have a hangover,” said Cohen, the retail analyst.

Sadie Cherney, owner of Clothes Mentor, which operates three women’s resale boutiques in South Carolina, noted that staffing shortages that it faced in the past 18 months have created “burnout” among her long-time employees. Cherney has raised pay and provided and more flexible scheduling than her competitors. Yet only about 15% to 30% of its scheduled job candidates show up for their interviews. That’s why store hours of operation aren’t yet fully restored to their pre-pandemic levels.

Now, on top of labor shortages, Cherney said, customers are pulling back on their spending.

“We do see uncertainty in the future as a concern, so we aren’t looking to scale or expand at this time,” she said. “But we do hope to return to our staffing levels from 2019.”

The Associated Press is an independent global news organization dedicated to factual reporting. Founded in 1846, AP today remains the most trusted source of fast, accurate, unbiased news in all formats and the essential provider of the technology and services vital to the news business.