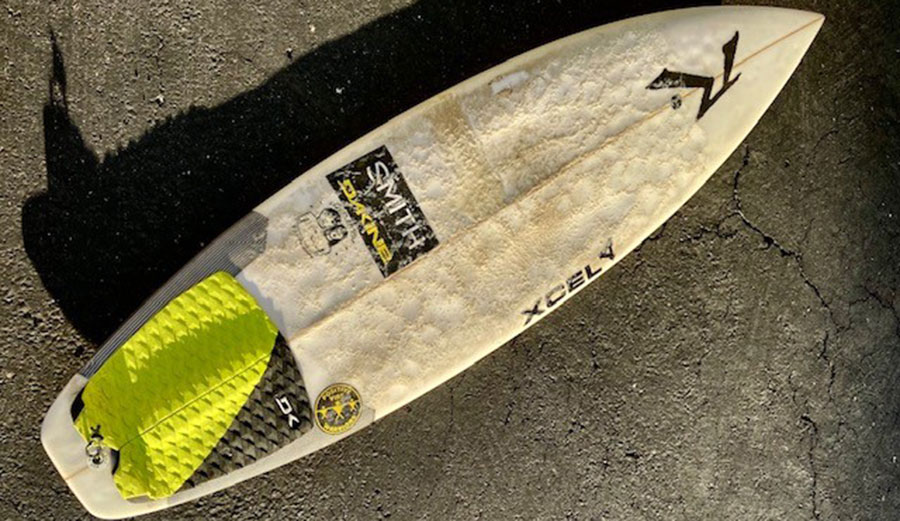 If your surfboard doesn’t dent up a little bit, it’s not a good thing. Photo: Rusty Surfboards/Instagram

Editor’s Note: This feature was made possible by our friends at Rusty Surfboards.

Like a fine pair of shoes, new boards need to dent up a bit. They need to get broken in. If a board doesn’t, chances are it doesn’t flex. And that would not be good.

In the early 1970s, companies offered up composite boards. Aqua Jet, Hansen, W.A.V.E. and more. They leaked and had other issues. Founded in Santa Cruz in the mid-nineties by shaper Randy French, Surftech made a very strong, light board. Composite construction. At first it was long boards. Then in the early 2000s, they started getting a few shortboards from various shapers. Several major builders jumped in around 2003. I felt it was a viable construction. Excellent for beginners and weekend warriors.

I did have some issues with the boards because they were made overseas in Thailand, but I signed up. Several of our best sellers. Early 2005. The lead time was approximately nine months.

Blank Monday. December 5, 2005. Clark Foam shut its doors. No warning; just a fax coming through at about 11 a.m. Less than a month later we were at the Orlando Surf Expo. Arguably the biggest. We agreed to let Surftech show our models in its booth.

Conspiracy theories ran amuck. It was just timing and good luck? Polyurethane foam was next to impossible to get. I had built EPS boards in the mid eighties, primarily for a wave pool contest put on by the then-ASP. It was in 1985 in Allentown, Pennsylvania.

It was time to explore it again. The foam came in all kinds of shapes and sizes and varied greatly in quality.

The resin… well, I got it initially from Greg Loehr. I first met Greg in the early seventies when we were both riding for G&S. He was from Florida. A solid surfer. Greg went on to build EPS boards. He developed his own resin.

I, along with many other board builders, talked the retail stores into buying/carrying EPS boards. When they first received them, they were all abuzz. Fricken light! Problem was, after a few weeks of sitting on the racks they started to yellow. Not just a little. They really turned yellow.

“Sorry, we can’t sell yellow boards,” they told us. “You’ll have to take them back or trade them for PUPE boards.”

Without much PU foam, alternative constructions were coming into play. So, Surftech blew up!

We had a couple of spectacular years. I even had a 7’6″ Big Cat in my quiver. Took it to Tavarua after only having it for a few weeks. Paddled good. Caught waves. From my first turn, however, I realized there was a problem: the board had no flex.

Some people really liked the durability and light weight of the composite boards. Most were eventually put off by the lack of flex, but that wasn’t all. There was something else missing: Foot wells.

As a board starts to get “right,” your feet naturally slide into their respective spots, which start out as shallow dents. They gradually deepen and become foot wells. The board has a life span.

Competitive pros set their best boards aside for competition because they know there is a time frame in a board’s life where performance is optimum.

Glassing? Too heavy and the board will feel dead. Too light, and the board won’t have any momentum, and won’t last long. As builders, we can make either very light boards or very strong boards.

What about the type of resin? Polyester. Cures faster. Eventually it gets brittle. Epoxy? I believe it’s a superior resin. It has better flex. A longer cure time. Stringer width. Lap width. How much resin gets left in or pulled out? Cloth. Different weights and weaves.

So understand that new boards are like a good pair of shoes. They’re pretty good out of the gate, but they get better and better with time. Then there comes a day when you look at your beloved friends and realize it’s time for something new. It’s true. Beautiful things have dents and scratches too.