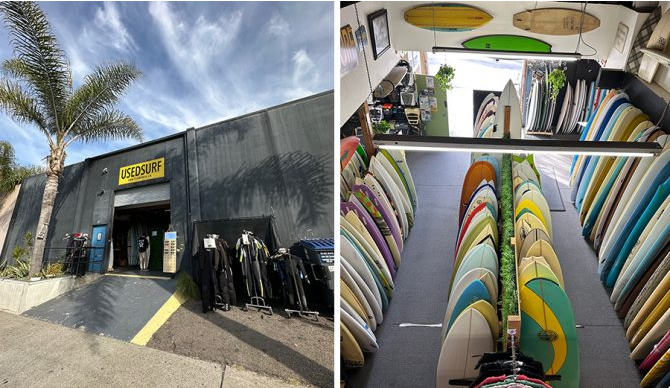 Defining the “core” of surfing always seems at the heart of the pursuit. So what’s core, exactly? A shortboard? A particular brand? To me, the core of surfing is the shop. The everyday surfer’s conduit between the industry and actually getting in the water. The surf shop passes on valuable nuggets of information we need to, well, actually surf better. And there’s nothing that defines the core surf shop like Usedsurf, the largest used board shop on the planet and literally an American original. Located in the heart of north San Clemente’s Los Molinos surf manufacturing hub, Usedsurf has been helping surfers find the right ride since 2005 – the first shop to specialize in used gear.

Usedsurf was started by Maurice Agnello and Stacy Volkart. It’s now across from Basham’s Factory (where the shop was originally housed). Usedsurf and its open garage door, framed by a black painted wall, has earned a place on this legendary street at the center of San Clemente surf culture.

I met Maurice when Usedsurf had just gotten off the ground. He patiently helped me get my first custom board made after I hemmed and hawed over the used rack that was a virtual smorgasbord of surf shapes – none, unfortunately right for me. The industry veteran who’d already put years in as a shaper, glasser, and air brusher, knew that. He steered me right.

Usedsurf is a much more welcoming environment than the usual teen-run retail outlet. “Our mission,” says Stacy, “is to help people educate themselves so they’re making the best decisions. If we don’t have what they want, we’re going to tell them the store to go get it and just empower them to make the best decision.”

“Like a lot of mom-and-pop shops,” adds Maurice, “Usedsurf is only as good as its employees. We hire active surfers. We encourage the staff to ride a variety of boards, try fins out of the demo center and learn about the boards that come into the shop. Specifically so they can listen and understand what the customer needs.”

Both Stacy and Maurice have a long history in the surfing world, Stacy as a semi-pro longboarder and Maurice as a craftsman, glassing and airbrushing for legends like Stewart, …Lost, Timmy Patterson, and Cole. Maurice eventually became a shaper himself, creating his own label, EDIT (you’ve probably seen them in the water between Huntington and San Diego). He wanted a shop of his own. He and Stacy met in 2004 and came up with the original idea for Usedsurf because they saw a niche in the industry. 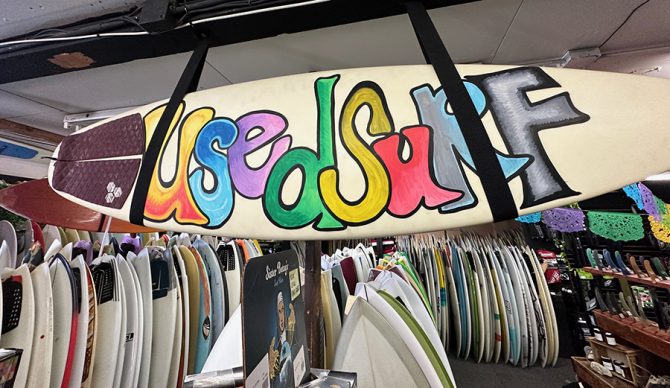 You can pretty much find any and all shapes at Usedsurf.

“We knew the internet could change everything,” Maurice says.

“We were having yard sales in my front yard, and we did pretty well, until we got busted by the city,” Stacy laughs.

Instead of yard sales, the business partners rented a space from Basham. But as their little idea grew, the duo needed their own space. And that space appeared across the street. 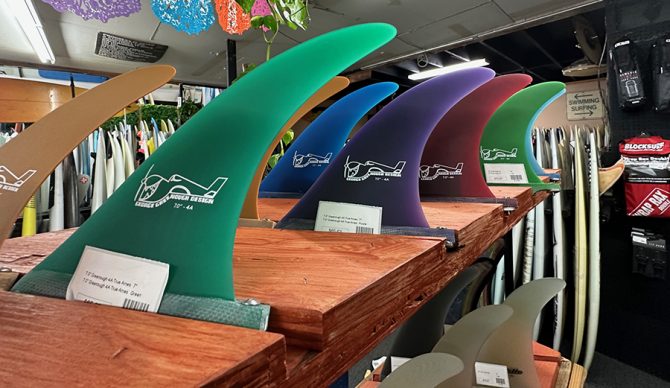 Usedsurf has become the fin demo center in Southern California.

Renting an area no bigger than a bedroom, Usedsurf set up in a friend’s warehouse, selling used boards and working with the same clientele that had become so loyal through the years. And the shop steadily expanded with Stacy as the business manager and Maurice as the ideator. They went from renting a bedroom-sized space to a legit shop with a showroom, using unique ideas to carve out a bigger niche.

One of those ideas was Usedsurf’s Fin Demo Center. Fins obviously make a huge difference in a board’s performance. But no one wants to drop $100 bucks on fins that don’t work for them. Stacy and Maurice contacted every fin maker they could with the demo idea. Now you can rent a set of fins at Usedsurf to try before you buy. “We have the largest fin demo program in existence with over 200 different sets of fins you can demo as well as now having an online program to try fins out for 30 days via our Buy, Try, and Decide program,” Maurice says. And yes, your rental price goes towards purchase.

They also offer consignment on your used sticks, as well as a “Board Search” program where you can give them the dimensions of a board you’re looking for and the staff will keep an eye out to see if the right shape comes through to match your wish list. Not to mention they’ve created two specific board labels for Usedsurf: the Cherry Bomb, a line of high-performance hybrid, groveler, and twin-fin surfboards. And the Shift, a brand that features a variety of mid-lengths, funboards, and quad fishes.

Usedsurf of course sells wetsuits, bags (and rents them if you don’t want to buy), leashes, and continues to expand its used fleet. They’ve created a rental selection that even includes a higher-end performance models from the likes of Channel Islands and Firewire. Usedsurf’s mission remains laser focused on helping people find boards that help them ride waves better – “The best place to fuel your stoke,” says Stacy. That’ll always be at the core of who they are, and what they believe the “core” of surfing should be.