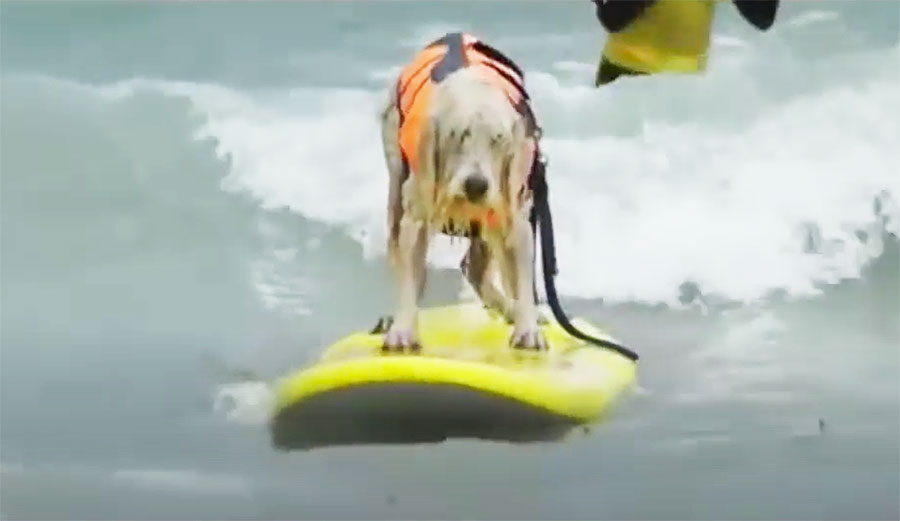 A Schnauzer has broken his silence about how some dogs really feel about dog surfing events. Photo: Screenshot/Searle

On a recent, sunny California day, a pack of dogs roamed the beach. The waves were up, and there were surfers in the water. But these weren’t ordinary surfers — they were dogs. Their owners laughed and smiled outside the waves, their teeth flashing in the sun, high-fiving when they pushed their four-legged friend into a wave. All looked well and good. Well and good, that is, until one dog chose to speak up.

“This isn’t what it looks like,” he told me, his tail tucked between his legs in a classic indicator of fear. “They’re forcing us to do this. Honestly, we’re all terrified. We don’t understand what joy they can possibly get from doing this to us.”

The dog — I’ll call him Spot, as he asked to remain anonymous — is a Schnauzer mix. He’s a good swimmer who enjoys swimming after sticks on occasion, but surfing, he told me, is not what he, or most other dogs, for that matter, is meant to be doing.

“I mean, yeah, some of us like swimming, but you don’t understand how terrifying this is for us,” he said, staring mournfully out at the beach. His owner, a blond woman in khaki shorts and a flower print blouse, was frantically running up and down the beach, shouting his name. It was his turn to surf in a dog surfing contest, and she needed to put his lifejacket on him.

“Just the fact that they’re putting us in lifejackets should tell you something,” Spot said. “Like, if you’re worried we’re going to need lifejackets, why are you making us do this?”

When I spoke with him, Spot had managed to escape his owner for a few minutes. He noticed my pad and pen and my press badge, and he caught my attention by dropping a stick at my feet. When I bent to pick it up and throw it for him, he whispered in my ear.

“You covering this thing?” he asked. “I want to blow the whistle. This isn’t for us. This is for our owners. Man’s best friend my ass.”

We sneaked away to a shady spot under a tree and Spot began to talk. His story is a sad one, but not an uncommon one. He was rescued from a shelter at a young age, then, in his words, “forced into a life that revolves solely around surfing.”

As he spoke, his hackles rose at times. He paused for a second, tears welling up, as a Boston Terrier, eyes bulging behind poorly-fitted goggles, clung desperately to the surfboard as it bounced violently towards shore. Spot raised a paw and pointed at him. His owner was bobbing in the waves behind him, waving his arms and screaming with hockey-dad passion. Spittle flew from his lips. His eyes held a kind of crazed pride.

“See that Boston?” Spot said quietly. “That’s Louie. He can’t swim. His back legs just kind of sink when he tries. But his owner insists on doing this to him every few months. Louie used to be hilarious. He used to run and laugh and bark. He did this funny thing where he held a frisbee in his mouth upside down so he couldn’t see. He’d run into things just to make us laugh. Now he’s just a shell of his former self, constantly worried that he’s going to be thrown into a wave. He doesn’t even talk anymore. It’s abuse. We all think this way, but we can’t speak up about it because we’ve been trained not to. Sit, stay, shut up. You know the drill.”

Spot told me that his owner first put him on a surfboard as a puppy. He’d just been taken from the shelter a few days prior and hadn’t even learned to swim yet. He wanted to please his new owner, though, so he did what he was expected to do.

“I was still doing that thing where you paddle the air when your owner holds you over the water, but I’d never actually been in it,” he remembered. “All of a sudden, he’s holding me on this surfboard and paddling out with me. I wanted to get off and get back to shore, but I knew he had those liver treats in the bag bag at the car, so I just did it. I didn’t know at the time what I was getting myself into.”

Spot did surf that day, but it was only the beginning of a life that’s less fetch and walks and more focussed on training.

“I wake up every day, and my owner has me doing slackline and Indoboard exercises right away. Then I get my kibble, and it’s right back to another hour of slacklining in the yard. After a five-minute water break, we move straight into breath-holding exercises. My Vmax numbers are through the roof already, because I’m a dog. But I have a hard time doing the underwater rock running, you know? It’s tough to hold a rock when you don’t have thumbs.”

It should be noted, though, that Spot’s training has paid off. He’s a three-time world dog surfing champ, but in his eyes, the juice hasn’t been worth the squeeze.

“I get plenty of exercise,” he told me, “but I can’t help but feel like I missed out on my puppyhood. I spent it training, training, training. I never even learned to sit on command, because it isn’t necessary for dog surfing. It’s kind of embarrassing. That’s the most basic of commands, and I can’t even do it. Don’t even get me started on staying, either.”

When I asked Spot what he hoped to accomplish by talking to me, he turned his head thoughtfully, staring out at the ocean.

“I guess I’m just hoping you’ll tell my story,” he said. “It’s too late for me, but hopefully you can open people’s eyes about this very real problem. Sure, there might be a dog here and there who likes surfing, but they’re few and far between. Most dogs? We don’t like surfing. We’re just doing it because we don’t know there’s another option out there. And if I can get even one owner to stop forcing their dog to surf… well, I’ll have done something meaningful.”

Editor’s Note: Johnny Utah is an “Eff-Bee-Eye” agent and an expert in works of satire. More of his investigative work can be found here.