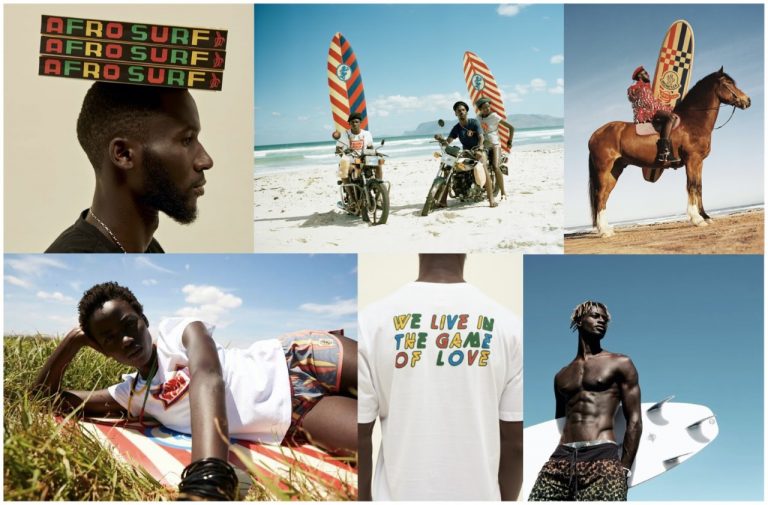 Mami Wata seeks to change the global perception of African surf culture through establishing itself as a major brand in the surf lifestyle space. Photo: Mami Wata.

Brands, and especially clothing brands, have a strangely powerful influence on our sense of identity. By donning a jacket from your favorite surf brand you say a lot of things, such as: “I support this,” or “I want to look like this.” It can be a way of demonstrating belonging to a culture, reinforcing your self image, and giving others a visual description of what’s going on upstairs. That can be tricky for some though, when the clothing and styles out there do little to represent who they are as a person.

“The majority of surf lifestyle brands are driven from a Southern Californian or Australian narrative,” Selema Masekela recently told me. “We’ve had some cool, Brooklyn-sort-of-reinventions of it in the last few years. Unfortunately, I’d say, very few big, Hawaiian-driven brands in the space, but there’s just so much room within the landscape of storytelling around what surf lifestyle and culture is.”

Selema, through his recently launched, mission-driven African surf-lifestyle brand Mami Wata (West African pidgin for “Mother Ocean”), wants to dig into that space and tell a different story than what’s been traditionally told in surfing. “This is a brand that looks to really expand the definition of surf lifestyle and maybe even redefine what it looks like to be a surfer,” Selema explained. “[Mami Wata] is a telling of modern African culture through the lens of surfing. For example, in our newest range you’ll see a lot of imagery around the use of dice. That’s all about the traditionally African embracing of luck, which is also such a big part of what it means to be to be in the water.”

It all began with a book Afrosurf, that brings to light the untold history of surfing on the African continent. “Just as we celebrate the early recordings of Polynesian surf culture in the 1700s, you can go back and find written proof from European sailors and explorers of Africans surfing in Ghana as far back as the late 1600s,” Selema says. “All the way until the early 1800s you find tellings of African peoples navigating boats in the surf and riding surfboards. And that is completely wiped away from the origin stories that we tell of surfing.” 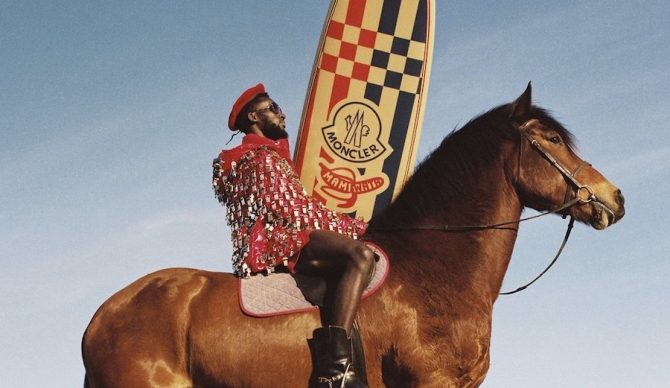 “The idea of African peoples participating in surfing has always been looked at as strange or foreign or ‘not for them,’” says Selema. Take for example, The Endless Summer, where Americans are portrayed as showing up and being celebrated by the natives for doing this thing, surfing, that they’d supposedly never seen before. “But even in the scene in Ghana you can see kids on wooden surfboards playing in the shorebreak. And it’s a little strange that those Africans got up on the visitor’s surfboards so easily when given the chance,” Selema says with a laugh. 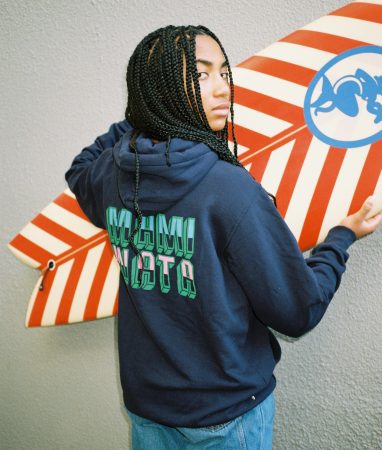 Along with clothing, Mami Wata produces a line of premium surfboards with a strongly African design aesthetic. Photo: Mami Wata.

To him, Mami Wata is a lot more than just a new surf lifestyle brand. It’s a harbinger of culture. “I look at this brand as a Trojan Horse to have people excited and curious about the endless wonder and joy that Africa has to offer the world,” Selema says. “This brand is one thread of many building a bridge of culture coming from Africa, and emanating out to the Western world, as opposed to the other way around… I think that when people think of Africa, for the most part they think of going on safari, climbing Kilimanjaro, or contributing to building wells. Traditionally, that’s how people in the West like to relate to Africa. Not through the richness and diversity of its culture and the endless ways in which it has influenced, and is influencing, the world. And so it’s the hope that in building this curiosity, Africa will become just as aspirational a place for people to go surfing and engage with as all the other surf destinations that we celebrate around the world.”

That’s a pretty big mission for just one surf lifestyle brand, but as I said earlier, brands do have a strangely powerful influence on our sense of identity, and when it comes to this type of change it all starts with people liking a certain pattern or style that Mami Wata is putting out there, purchasing it, and wearing it. And there’s plenty of other things Mami Wata is doing behind the scenes to uplift African surf culture such as designing and manufacturing their garments in Africa, using local materials like African cotton, and investing in African communities. 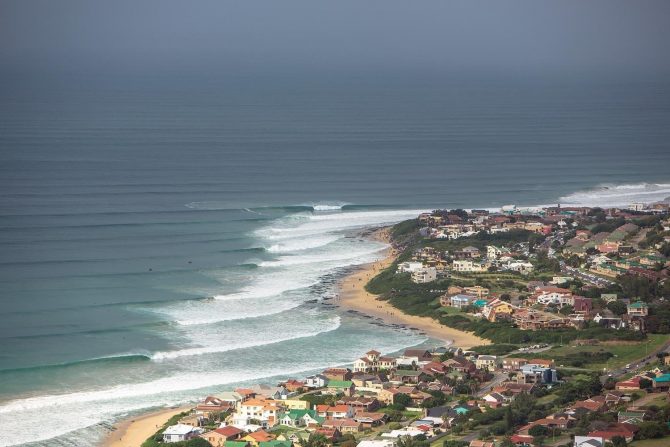 Jeffrey’s Bay, one of the most celebrated waves in Africa, if not the world. Photo: Mami Wata.

“I get the question all the time: ‘can I,’ or ‘would it be ok for me to wear Mami Wata?’” says Selema. “And I’m like yes! Mami Wata is for everyone. There’s a big difference between appropriating traditional tribal African culture and wearing clothing from a modern design brand that happens to emanate from Africa. That question is symbolic of just how much people have been kept in the dark about what modernity looks like in these various landscapes, and we think of Africa as being traditional and tribal. That’s one of the many reasons for a brand like this.”

To Selema, though, the mission of Mami Wata represents far more than just a mission that he is passionate about and believes in – it’s one that he has a personal connection with too. “My dad [Hugh Masekela] lived to get people excited and curious about the richness and magic of Africa,” he says. “And he did that through the storytelling of his music. I just wish he was here, actually, because he would be so fucking hyped. If he saw this book [Afrosurf] he would have lost his shit.” 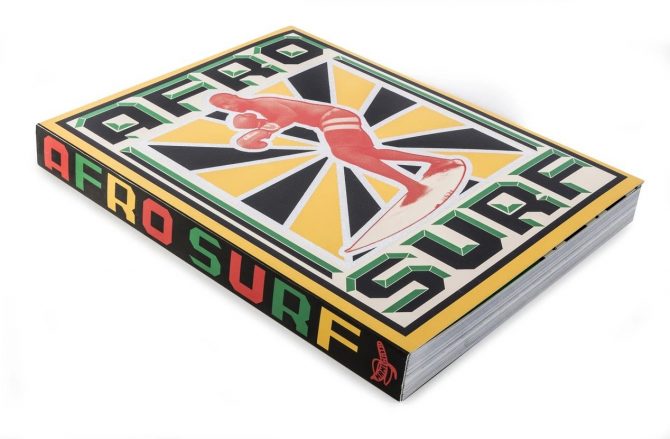 The AfroSurf book began on Kickstarter, was an instant bestseller, and is now being distributed by Penguin Random House. Photo: Mami Wata.

“I’ve been told so many times that ‘surfing is just not a part of black culture,’” Selema continues. “And it’s like well, where’s that coming from? Especially here in Southern California people have become quite convenient with thinking that surfing, which is ‘theirs,’ doesn’t have a larger story than the one that they’ve heard. We’re not out here trying to rewrite history, this is merely gaining access to more of it. Unfortunately some people find that wildly threatening. And there’s nothing I can do about that except continue to enjoy the ride and enjoy expanding this landscape to make it a better place for everyone. If we were taking ‘roll call’ among surf cultures, this is Africa just raising its hand and saying ‘present.’ Not ‘we’re the only one’s here,’ but an accounting for everyone who’s actually in the room.”

Check out Mami Wata’s full range of garments on the website, and read the stories available through the AfroSurf Journal to get the backstory on Mami Wata pieces and styles.

Be sure to bookmark and visit The Inertia website to view valuable Surfing and Outdoor related News and Resourceful Articles regularly.