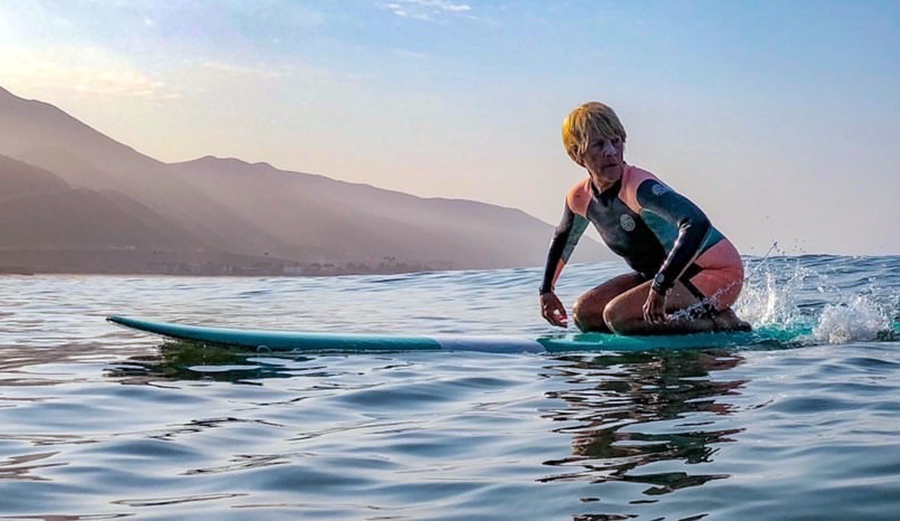 Surfer Susie in her element. Photo: Courtesy of Susie Terry

You’d be hard pressed to find someone more stoked on surfing than Susie Terry. Born and raised in Ventura, Calif., Susie (now known as “Surfer Susie”) was first intrigued by the idea of riding waves at 11 when her aunt took her to see Gidget — she was mesmerized by the film and instantly vowed to become a surfer girl.

Despite her lack of knowledge, a week later Susie found herself at the Ventura pier, new surfboard in hand. Per her dad’s instructions, who also knew nothing about surfing, she paddled out, pointed her board towards the beach, and paddled for her first wave. From there, she watched people in the lineup and slowly learned from them. She was the only girl out, but she was happy.

“I’m a highly motivated person and I don’t back down easily on things,” says Susie. “If I have my mind set on something, I’m going to do it hell or high water. So I just went into it thinking that I was going to be a surfer girl and I did it.”

Fast forward a few years and Susie was surfing at C Street when she snaked a guy on a wave and he ran into her. Never afraid to speak her mind, Susie flipped him off and cussed him out before swimming into the beach to retrieve her board. Seven years later, they were married. Surfing has continued to be an integral part of their lives and they still surf regularly, their kid and grandkids following in their aquatic footsteps.

Susie has always been a hot or cold personality. When she loves something, she’s all in. In January of 2021, on a whim, Susie posted a video on Instagram where she was excitedly describing her session. California had been experiencing a particularly long flat spell and Susie caught her first waves in weeks. Needless to say, she was stoked.

When she turned on her phone the next morning, the video had been reposted to Kook of the Day and her inbox was flooded with messages. The video quickly went viral and she received lots of positive feedback. So, she continued posting them.

People seem to like that her videos are real, with no pretense. They aren’t planned or scripted: they’re simply Susie being herself. Her energy and excitement are contagious while the words “bitchin’,” “kick ass,” and “Stoke City,” are words she frequently uses in her videos as she has for years in real life. Her commentary resonates with people and that stoke have inspired people (of all ages) to get out and surf.

“I absolutely love surfing,” says Susie. “I can’t imagine not surfing ever. When I get up in the morning I’m thinking about the tide, who’s going to be at the beach, and when I’m going to go — I’ve been doing that for years and years. I guess that’s where the stoke comes from because I love it.”

At 74 years old, Susie is frequently one of the older people in the lineup. Although her love for surfing has remained constant over the years, what she specifically loves about it has changed with time. Today, her favorite aspect is that it’s become a fountain of youth.

Surfing has been a lifelong love affair for Susie and for as long as she’s able, she plans to continue riding waves and sharing her stoke. Because why the hell not?