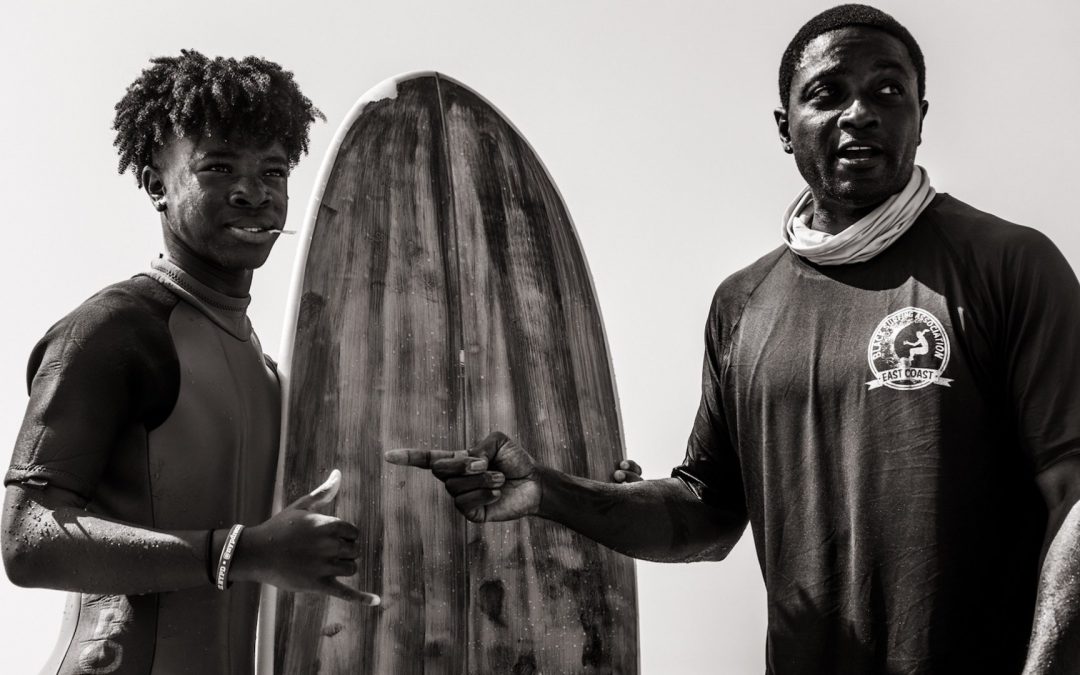 This feature originally appeared in SURFER Volume 61, Number 3. Since that issue’s release, due to the impact of the pandemic on SURFER’s business, the staff has been furloughed indefinitely and all content production has been paused. Hopefully SURFER will one day return, in some form, but in the meantime please enjoy this feature from the final issue.

In April of 2014, Lou Harris, a surfer and resident of Rockaway—an oceanfront community in the New York City borough of Queens—read a news article about a 16-year-old boy who’d been arrested after setting fire to a mattress in his apartment in neighboring Coney Island. When the cops asked the kid why he started the fire, they reported that he said it was because he was bored.

Harris couldn’t bear the thought of kids in his community growing up with so little engagement—and in a place with waves, no less. To Harris, the answer was obvious—he’d introduce local youth to the thing he loved so much. He’d get them surfing.

Harris, who is now 48 years old, was born in Queens and grew up in Dix Hills, Long Island. He moved to the Rockaways in 2006, where he began teaching himself to surf to help come to terms with hanging up his skateboard in his late 30s.

Soon enough, Harris crossed paths with Brian “B.J.” James, a dedicated Rockaway Beach surfer and among the few Black wave riders you’d have found in that lineup in the 1990s—despite the neighborhood’s population being roughly 35 percent Black. Author of “The Nautical Negro”, a memoir about his life as a Black waterman, B.J. showed Harris the ropes and taught him what a kook was—and how not to get called one.

Harris’ surfing progressed and he formed a deeper connection to the community, and when he read the article about the 16-year-old boy, he wanted to use the stoke of surfing to help prevent anything like that from happening there again. He started off by offering a curious local skateboarder surfing lessons if he got himself a wetsuit. He did just that and became Harris’ first student.

As Harris’ grassroots mentorship was taking root in Rockaway, he came across a profile of Californian surfer Tony Corley—the founder of the Black Surfing Association—in an issue of The Surfer’s Journal. Four decades earlier, Corley began organizing informal fundraisers for junior swimming and lifeguard programs after learning that Black children were statistically much more likely to drown than white children in the United States. He went on to submit a letter to the editor of SURFER in hopes of finding fellow Black surfers who would be interested in connecting and surfing with him. SURFER published that letter in January 1974, which prompted a slew of responses. By 1975, the Black Surfing Association was officially up and running.

Harris set out to befriend Corley, but didn’t rush to petition him for his support right away. Instead, he connected with Corley on social media and initiated occasional correspondence while he worked to build momentum around the free surfing lessons he was offering. One day, Harris received a message from a teacher and former volunteer surf instructor who pledged $500 to help bolster his program. When the check arrived, it wasn’t made out for $500, but $1,500. Harris finally felt he could offer the kind of mentorship program his community deserved, and he reached out to Corley to see if he’d endorse him. In 2016, the Black Surfing Association’s East Coast Chapter was formed in Rockaway.

Harris took a job working as a doorman at a high-end, Upper East Side apartment building, opting for the otherwise dreaded 12 a.m. to 9 a.m. graveyard shift just so that he could be at the beach in the Rockaways to begin free surf lessons at 11a.m., which he runs until 1 p.m. on weekdays in the summer and occasionally in the winter. He tries to be home and ideally in bed by 2 p.m. so he can catch enough shut-eye to be back in uptown Manhattan for work again by midnight. On Saturdays, when he’s not working, “Mr. Lou”, as his students call him, starts lessons at 9 a.m.

Lately, the surfing community at large has been organizing paddle outs in solidarity with the Black Lives Matter movement, holding memorials for Breonna Taylor and George Floyd, among the countless others who’ve also lost their lives to systemic racism and police brutality. At the time of this writing, the East Coast Chapter of the Black Surfing Association has held three such events this spring and summer. On June 5, Harris and co. held a paddle out for Breonna Taylor, a 26-year-old EMT who was shot and killed by officers who forced their way into her home in the middle of the night in Louisville, Kentucky. The following day, adding a layer of symbolism to the paddle-out ritual, Harris led an 8-block paddle in honor of George Floyd, who was killed by police in Minneapolis, Minnesota after being pinned to the ground and suffocated for over 8 minutes. Some 350 surfers showed up in support.

The paddle culminated in a circle at Beach 83rd Street, where the protesters held hands, raised their fists, and chanted “No justice, no peace”.

At the time of this writing, two more paddle outs have taken place since, with surfers carrying flowers, holding signs in support of Black Lives Matter and against systemic racism, and chanting the names of Taylor, Floyd and others. On Saturday, August 22, Harris led surfers from Rockaway’s Beach 73rd Street in a 13-block paddle for Taylor, who was killed on March 13. The paddle culminated in a circle at Beach 83rd Street, where the protesters held hands, raised their fists, and chanted “No justice, no peace”. Back on shore, even more protesters walked the 13 blocks in solidarity.

To Harris, in addition to standing up against systemic racism, the paddle outs are an extension of the Black Surfing Association’s mission—to build a strong community in the surf, one where Black youth feel seen, supported and protected.

“When you talk to kids here at Rockaway, they think of a surfer as John John Florence—blonde,” says Harris. “When I say, ‘Hey, I’m a surfer,’ they’re shocked. We’re trying to reach every kid, but we’re really trying to reach the kids that wouldn’t otherwise get the opportunity.

We just want to keep kids busy and active, and spread the message and spread the stoke of surfing, and go into schools and talk to kids about water safety.”

“There’s no racism out there”, says Harris of the ocean. “When you come out of that water, of course you go back to your life. But you lose yourself when you get into the waves.”