“The Evolution of Skate Videos, From VHS to TikTok – The medium might have changed over the past 50 years, but interest is still riding high.” by Guillaume Patigny via Vice News 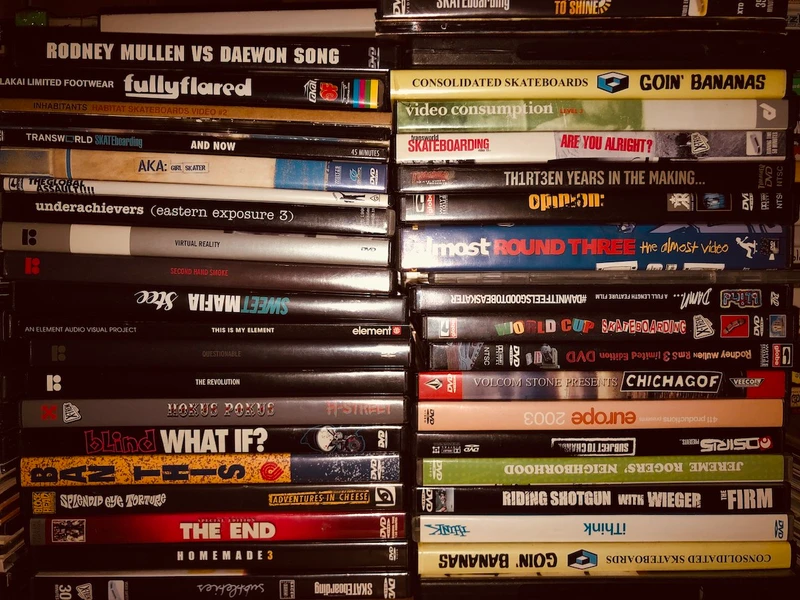 When it comes to skateboarding, the only thing more important than actually going skating is making sure that you have footage of you doing it. You can tell people you’ve pulled off this, or jumped that, but without actual evidence of those particular alleged achievements, people will take you as seriously as Boris Johnson’s apologies.

Skating owes much of its enduring popularity precisely to these videos. This has been the case for the past half a century, with the first ever skateboarding video dating back to 1965. Titled Skaterdater, a dialogue-free, coming of age short film shot in sunny California focused on a group of downhill skaters known as the Imperial Skate Board Club as they hoped to impress local girls with their prowess.

The film won the Palme d’Or for Best Short Film at 1966’s Cannes Film Festival and has proved to have a long shelf-life, having been the subject of both academic study and extreme sports fandom. Skaterdater is still of cultural interest, even if it presents us with a vision of skate videos that looks nothing like the ones that aficionados like myself and my friends sit down and enjoy together today.

As skateboarding became increasingly popular amongst young people the world over, Hollywood cottoned on to the fact, featured skating in cult movies like Back to the Future and Gleaming the Cube. This was, as skate historians might remind you, a moment when the sport was still largely confined to pools, bowls, and ramps. The Californian surf-inspired skating scene of the 1970swas immortalised for younger skaters in the 2001 documentary Dogtown and Z-Boys, directed by skate supremo Stacy Peralta.

That’s not to say that skating was the sole preserve of pool-plunging ex-surfers. By the mid-80s, the likes of Rodney Mullen and Mark Gonzales were laying the foundations of what we now know as street skating. They just weren’t dragging cameramen along with them for the ride.

In 1988, the movie Shackle Me Not came out. This hour-long video was released by H-Street – a skate team based in San Diego, California, founded by pro skateboarders Tony Mag and Mike Ternasky in 1986 – and arguably marked the birth of the modern skate video. Its combination of gritty footage and a punk soundtrack set the tone for the avalanche of skate videos that were to follow in its wake.

These releases included the legendary Video Days, the 1991 classic released by the skateboarding brand Blind. Directed by future-Hollywood darling, Spike Jonze, and featuring the skating talents of Jason Lee amongst others, Video Days was dynamic, action-oriented, and in your face. Other big hitters in the heady days of the 1990s include Plan B’s Questionable (1992), Girl Skateboards’ Mouse (1996) and Toy Machine’s Welcome to Hell (also 1996).

The thing that made this explosion of skate videos possible was Sony’s era-defining VX1000 camcorder, the first device to use MiniDV tapes, which were much smaller than previous tapes. The camcorder’s relative affordability, portability and ease of use made it an essential on the skate scene and led to a standardisation of a skate video aesthetic. One of the defining visual characteristics of that aesthetic is the fish-eye lens, which shows up everywhere in skate videos of the 1990s and 2000s and still features in tapes released today.

Another technological advance, the internet, has allowed skaters to delve into the history of their hobby. File-sharing services like Limewire gave people the opportunity to fill their hard drives with all manner of skate footage. The ability to easily and freely consume those videos allowed people like me and my friends to develop a serious interest in skate culture.

Then, YouTube came in the latter half the the early 2000s, and killed off the skate DVD, which had already replaced skate VHS. Magazines like Thrasher and Transworld – which attempted to bolster sales by bundling DVDs with their latest issues – had to find new ways to stay relevant in a context where audiences didn’t need to spend money for content.

Thrasher managed to drag themselves into the digital age of skateboarding pretty quickly, joining YouTube back in 2006 and amassing nearly three million subscribers along the way. They’re also about to celebrate the publication of their 500th issue, a testament to their work and to their fans’ eagerness to preserve their culture, even for a price.

ONE OF SONY’S GAME-CHANGING CAMCORDERS – AFFORDABLE, PORTABLE, AND EASY TO USE, THEY ALLOWED PRETTY MUCH ANYONE TO FILM THEIR FRIENDS SKATING.

If YouTube shortened skateboarders’ attention spans, then Instagram decimated them, ushering the era of the minute-long video. Suddenly, videos that were 10 or 20 minutes were considered excessive, and while this led to a proliferation of free content, something was lost, too. Inviting friends over, grabbing a pizza and settling down on the sofa to watch a 15-minute video always felt a little lacking in the old magic.

Things got even shorter when TikTok launched in 2016. The super-short videos hosted on the platform opened up the skate scene to more people than ever, with skater girls, queer and non-binary skaters finally finding their online home.

For skaters themselves, the rise of social media opened up new avenues for self-promotion. It was now easier than ever to try and catch the eye of professional skate teams. Rather than having to mail out physical evidence of one’s abilities, you could just upload them for the whole world in a matter of minutes. This gave skaters a sense of independence, putting (some of) the power in their hands. In addition to their finely-honed array of tricks, skaters increasingly learned how best to get eyes on their videos, understanding that big brands are impressed by viewers, followers, and subscribers.

A COPY OF A DVD-FESTOONED ISSUE OF SKATE BIBLE THRASHER.

Not everyone abandoned the traditional video formats, and by the mid-2010s things were getting longer once again. Brands like Palace and Bronze 56K extended the length of their releases, giving the world’s skaters something to really sink their teeth into on the sofa in the evening.

If the modern skate film has a superstar director, it might well be William Strobeck, the American cinematographer best known for his work with Supreme. The 2014 film Cherry marked a return to the old school full-length video format, and he did it again in 2018 with the instant classic Blessed. Both films have made a mark on a new generation of skaters who never knew they were looking for a long-form video to change their lives.

A SELECTION FROM THE AUTHOR’S SKATE FILM COLLECTION.

VICE Media Group strives to provide an elevated employee experience with a wide range of benefits. On top of excellent health and wellbeing benefits, they are always working to offer innovative programs and perks across their global workforce.