“The unique abundance of skate culture, with the first Ambassador of Skateboarding” by Neftalie Williams and Sam Firman via AdventureUncovered.com 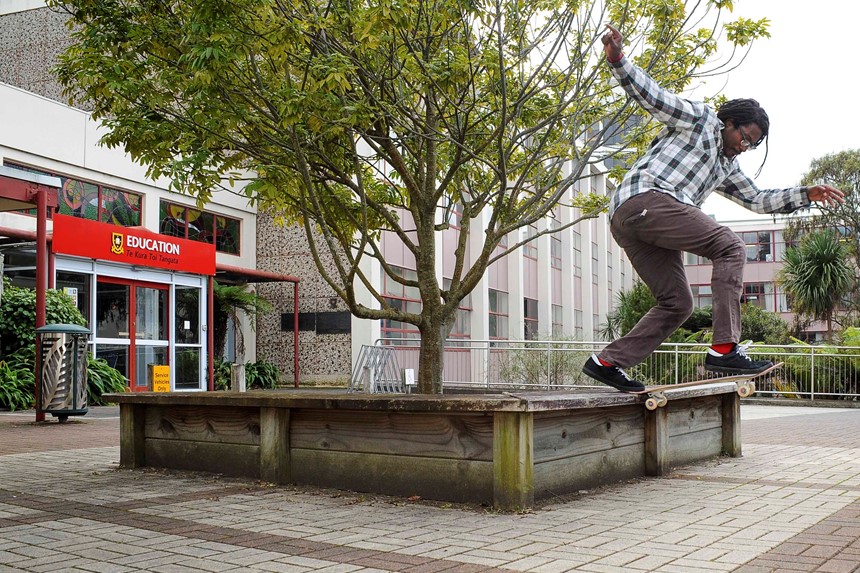 Neftalie Williams is a scholar, teacher, writer, founder, bridge builder and the first Ambassador of Skateboarding. But first and foremost, underpinning it all, he’s a skateboarder. His life work is letting the possibilities of skate culture blossom.

This isn’t your average ‘sport connects’ message, although it is of the genre. Williams thinks skateboarders should be everywhere. Partly because, why shouldn’t they be? But also because he believes skate culture brings something unique and important to the world. And he’s working hard to make the world feel this.

Skateboarding often gets thrown together with snowboarding and surfing – the other countercultural board sports. But while there are similarities, the comparison doesn’t go far. Skateboarding – in a way that I’d failed to consider, even as a (now very occasional) skater – is unique. Which other sport, if that’s the term, brings so many diverse young people together in confined urban spaces, without rules or supervision, to express creativity and spearhead youth culture?

Compared with snowboarding or surfing, skateboarding has “a different set of locations, spaces, geographies that are just always in the mix,” says Williams. “You’re always with people.” Skateboarding is accessible, concentrated, fluid. And as films like Dogtown and Z-Boys and Minding the Gap portray, skateboarding’s anti-establishment roots – what Williams calls the DIY ethos of “making a way  out of no way” – have provided a home for many in search of one.

These conditions mean skateboarding has been diverse since the beginning. Williams points out that the stars of the pioneering Z-Boys of the early 70s were Tony Alva (Dutch and Mexican-American heritage) and Stacy Peralta (Mexican and Irish). Peralta went on to form Powell Peralta in the 80s, which starred skaters like Tommy Guererro (Native American, Chilean and Filipino) and Steve Caballero (Japanese and Mexican). Today, he points to the rich culture of skaters of colour using skateboarding as a tool for social good. People and organisations like Briana King, Black Girls Skate and Donald ‘Coach’ Cooley of DGK Skateboards and Pushin’ Forward.

Too consistently, though, this truth has been lost in translation, or mediatisation. This is a story of where power lies, Williams says. “Diversity is the victim for everyone, in every aspect, because those in power may think, ‘Oh this isn’t my crew,’ or ‘This doesn’t look like me,’ or ‘This isn’t my story, so I’m gonna tell the stories I know. I’m going to choose the people to represent the way I envision things versus the way things are being practised by the people involved.’” White dudes controlling media institutions, and exhibiting inherent biases by speaking to people they know, recognise and can access, has unsurprisingly perpetuated the familiar white-dude skate avatar.

“The stereotypes people hold have more to do with those who are in power being able to control the images that people saw than it did with the reality on the ground,” says Williams. And this has blinded other domains, including scholarship, to the richness of skate culture. “People didn’t understand that there was that potential,” he says. “A lot of scholars and a lot of people outside of skateboarding didn’t see that. But I will say this: those who needed those things found those things.”

‘The stereotypes people hold have more to do with those who are in power being able to control the images that people saw than it did with the reality on the ground.’Dr. Neftalie Williams

Williams certainly isn’t blind to the problems that exist in skate culture. He’s optimistic but not idealistic. Like anything, he says, skate culture is a reflection of wider society – the good, the bad and the ugly. Prejudice plays out in skateboarding because it plays out in the world. Skate culture remains “in the process” of becoming. This is “very important when we think about where skateboarding and action sports broadly are,” he says.

But Williams thinks skateboarding is well placed to grow beyond and challenge those dynamics. Its diversity, and its anti-establishment roots, are two core reasons. “We’re not looking at an institution,” he says. “People are now envisioning skateboarding as a tool for the things they want to do in their lives, or the way they want to live their lives.” It’s also important to remember that skateboarding is young, which makes change easier. Williams sees gatekeepers who once resisted new communities entering skate culture increasingly relinquishing that opposition.

Williams knows these challenges better than most, and has been on a mission to help skateboarding help the world since growing up as a young skater in Boston. Beginning humbly by organising skate camps and demos, he graduated to  working in the skateboarding industry as a writer and photographer. Earning his master’s degree in Public Diplomacy,  he decided to complete a PhD on the intersection of race and skateboarding. Both his forthcoming books continue to explore the experiences of intergenerational skaters of colour and their progression and impact on the industry. He is now pioneering scholarship and “cultural diplomacy” around skateboarding. He teaches the world’s first university course examining issues of race, class, gender and media representation through the lens of skateboarding culture: Skateboarding and Action Sports in Business, Media, and Culture, in the Annenberg School at the University of Southern California (USC). At the Yale University Schwarzman Center, Williams is Visiting Fellow for Race, Culture and Community. He’s worked with the Tony Hawk Foundation/ the Skatepark Project on skateboarding studies at USC and been the first ‘Ambassador of Skateboarding’ as an envoy for the US Department of State along with other work in the field.

TONY HAWK AND NEFTALIE WILLIAMS TALKING IN ON OF WILLIAMS’ CLASSES, Image courtesy of Olivia Lowry

Part of the challenge of helping skateboarding have a positive impact is researching and understanding it as an ecosystem. How does power play out? What barriers do skaters face? What are the mechanisms of change? Though skate culture may not be an institution, this is one of the reasons Williams is passionate about building bridges with institutions, most notably universities, with the expertise to build this understanding.

Williams’ USC course is genuinely trailblazing. Skaters and non-skaters come together to look at societal ecosystems through the lens of skateboarding. “This is not a skateboarding course,” he tells his cohorts at the beginning. Rather, it’s about improving systems – something Williams believes the diverse, way-out-of-no-way, anti-establishment ethos of skateboarding is well positioned to help do. “I’ve been thinking very deeply, and my cohorts are always thinking about, what does this mean? And why is it different? Unpacking this gives us the potential to address the future,” he says. He has students work on real problems within the culture, and encourages outside activity. One previous student, for instance, runs a women-and-queer-friendly skate group. And slowly but surely, he sees more skate scholars arriving on the scene to help support the skateboarding culture ecosystem.

But the biggest challenge, as Williams sees it, is building bridges between skate culture, regular people and wider institutions. “My dream,” he says, “is that when a non-skater is about to stop someone from skating a spot, another non-skater says, ‘Woah, Woah! Do you know what they’re doing here? Do you see this group of skaters? Do you even know this many diverse folks?” Williams laughs. “There’s a lot going on here! Why would we stop them?’”

‘My dream is that when a non-skater is about to stop someone from skating a spot, another non-skater says, ‘Woah, Woah! Do you know what they’re doing here?’Dr. Neftalie Williams

He also wants non-skaters, even anti-skaters, to “see themselves in skateboarding.” Demonstrating the abundance of skate culture – its diversity, resilience, joy, capacity to engage young people – is vital. On multiple fronts, Williams works hard to break down the idea that skaters shouldn’t go into college, or business, or any other area of society, and to build links between skaters and universities and businesses. “The world likes to create silos,” he says. “ I see skateboarding as able to break through and push past those silos. Then we can do  things together.” Jazz represents this, as does the evolution of skateboarding to welcome not just rock and punk music, but hip hop, rap, popular music more broadly.

He has worked with Garth Ross, the Finding a Line Collective (FAL), Art Space New Haven and Connecticut’s skate NGO, Push to Start. He’s worked with Cuba Skate, and collaborated with jazz artist Jason Moran to demonstrate the relationship between skateboarding and jazz at the John F. Kennedy Center in D.C. and the Ford Theater in LA.

All of this, from his international work to his local work, is the “cultural diplomacy” that defines his work. But does he experience opposition from people within the skate community who fear co-option and dilution if skate culture builds stronger links with traditional sectors? He does see this, he says, just as he encountered it when skateboarding became part of the Olympics. But he is adamant that bridges are the best way to avoid co-option (and many other problems). “Ultimately I just want skaters to be able to skate and not be hassled by the police,” he says. “And if I don’t want us to be harassed, that means that I have to spend time getting people to understand skateboarding, and skateboarders as reflections of themselves.”

More on this topic

The purpose of AdventureUncovered.com is to influence social and environmental change through responsible adventure. They inspire and motivate outdoor enthusiasts to take positive action towards the health of our planet and its people.

We were made aware of this excellent article through our friends at The Skatepark Project (BRA Community Partner). If you have interest in advocating and fundraising for a new or updated skatepark in your area, be sure to visit their helpful and resourceful website and connect with their team.