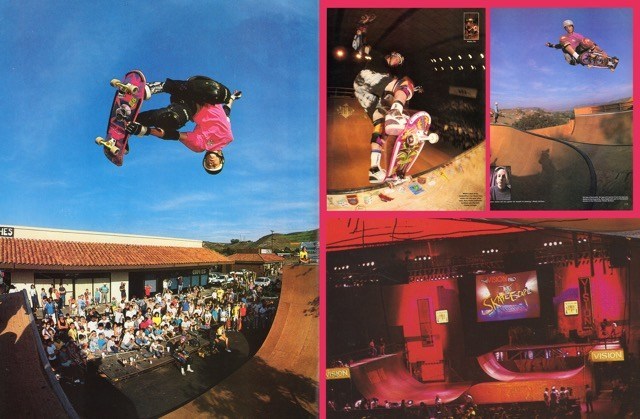 Traditional vert is dead, at least to the Olympics. As detailed in our Olympics: Fact From Fiction article last month, neither vert nor mega ramp will be represented in Tokyo next year. Instead, the two ‘disciplines’ will be “park” and “street.” The reasons behind the decision — participation rates, accessibility, gender equity — are well intentioned, but the decision itself still probably came as a bit of a shock to the world’s vert skaters. And it will have far-reaching ramifications, considering that the 2020 Olympic Summer Games will almost certainly generate the largest global television audience skateboarding has ever seen.

The traditional vert ramp was the cornerstone around which the ‘80s NSA contest circuit (and later the ‘90s/’00s X Games model) was built. The vert ramp was (and is) the backdrop for the cutting edge of progressive aerial tricks and vertical NBDs— Tony Hawk’s 900 in ‘99 being the most famous. Meanwhile, love it or hate it, mega ramp seemed like the obvious choice for the mainstreamest of mainstream crowds with it’s big air “wow factor.” Having been the poster child for vert skateboarding since his teens, and as skateboarding’s biggest ambassador for almost four decades, you might think Tony Hawk has an opinion about all of this. You’d be right.

What are your thoughts on skating’s Olympic debut? You have said that the Olympics needs skateboarding more than we need them; do you still think that’s true?
Yes. Skateboarding is already more popular (in terms of participation and/or industry size) than many of the Olympic sports. We have established skating as something kids choose to do as readily as almost any other team sport, and we have many legitimate competitions throughout the year that get plenty of viewership. The Olympics found a “cool-factor” with snowboarding in the Winter Games (Nagano 1998) and they are long overdue to include youthful (newer) sports in their Summer Games. I think the ratings will show a younger demographic tuning in thanks to skateboarding’s inclusion.

How do you feel about vert and mega not being included?
It’s a shame that we won’t see state-of-the-art aerial tricks, but I understand that street and park are far more accessible in terms of facilities and international participation. I predict that once the dust settles from Tokyo, that there will be serious discussions of at least adding vert to 2024.

From what I understand, this decision (especially for mega) was made based on gender equity. That there simply aren’t enough girls/women skating vert or mega to make it happen. Do you agree with that rationale?
There are plenty of women skating vert. Mega, not so much. But if they announced the addition of mega, we would see an influx of new female talent stepping up to try. I believe they went with two disciplines that are more popular in terms of participation and available facilities. But I don’t understand why there are limitations on how big the transitions can be in park events — or maybe it just seems that way based on the parks/contests I’ve seen so far.

How do you think skateboarding changes when you remove vert and mega?
It’s going to be harder to understand and/or appreciate to the non-skating audience. A noseblunt on a steep quarterpipe is not as impressive as a huge kickflip/varial 540 to a casual spectator. It will be up to the commentators to explain why certain tricks are so much more difficult but less impressive visually. If nothing else, Olympic skating will look more tangible for beginners to pick up and try for themselves; as they probably have a skatepark nearby with similar terrain that they see on TV. It’s low-cost to start and offers a great reward of self-confidence at the base level.

You have questioned park skating’s lack of progression in the past. Do you still feel that is an issue?
It’s hard for me to accept that skaters like Jimmy Wilkins or Moto Shibata struggle to make a living (or even gain acceptance) when they can do the absolute hardest transition/aerial tricks consistently. For example: We have yet to see a 720 in a park event; that trick was created nearly 35 years ago and has been recently surpassed on vert by Mitchie Brusco doing a 1260 (among other groundbreaking tricks he did on vert at the last X Games). But we won’t see Brusco in the Olympics because he has focused on the “novelty” disciplines of vert and mega. This style of skating has given way to big boneless ones and basic 540s for big prize purses and Olympic dreams. I am happy to see skaters get their due respect on any terrain, but I would like to see the revolutionary ramp skaters also get some recognition beyond the occasional small competition.

Where should we draw the line between progression, style, and flow?
In terms of style and flow — they are both hugely important. But I don’t think a skater should spend half of their competition run getting from one place to another via carves or 50-50s.

I was told by USA Skateboarding’s Josh Friedberg that one of the main goals for judging criteria is to foster progression. For example creativity and originality are given the most consideration by the judges and there is no set score for any single trick. Have you had any insight on the judging side?
Not at all, but I appreciate that the unique skaters like Oski (Oskar RozenbergOpens a New Window.) are getting recognized through this criteria. It gives me hope that creativity will thrive above all else. It’s also the closest we can come to “having no rules” while still being subjective.

Oski Rozenberg, gap up 50-50 yank in. Salt Lake City, Utah, 2019.What’s your role going to be in Tokyo?
I honestly don’t know. I received a vague message earlier this year about, “Being the TV voice of Olympics Skateboarding,” but nothing since. I would be happy to lend my voice and expertise to the broadcast, as I have been advocating for skating in the Olympics since the very first “official” meeting about it over 15 years ago, regardless of which disciplines were to be included, and I have plenty of experience doing commentary, including this year’s Vans Park Series.

Tony on the deck at the Vans Park Series with Oski Rosenberg, 2019.Is there an age limit for qualifying? Was there ever a moment where you considered coming out of retirement and trying for the park gold?
(Laughs) There is no age limit as far as I know, but I competed aggressively for over 25 years and I had a good run. It’s time for a new generation to shine on a bigger stage.

Tune into the Olympics on Friday, July 24, 2020 on NBC along with 5 billion other humans. Or don’t — and go learn to skate vert that day instead.

For more Olympic news as well as a ton of ripping skateboarding visit Transworld Skateboarding by clicking: here.