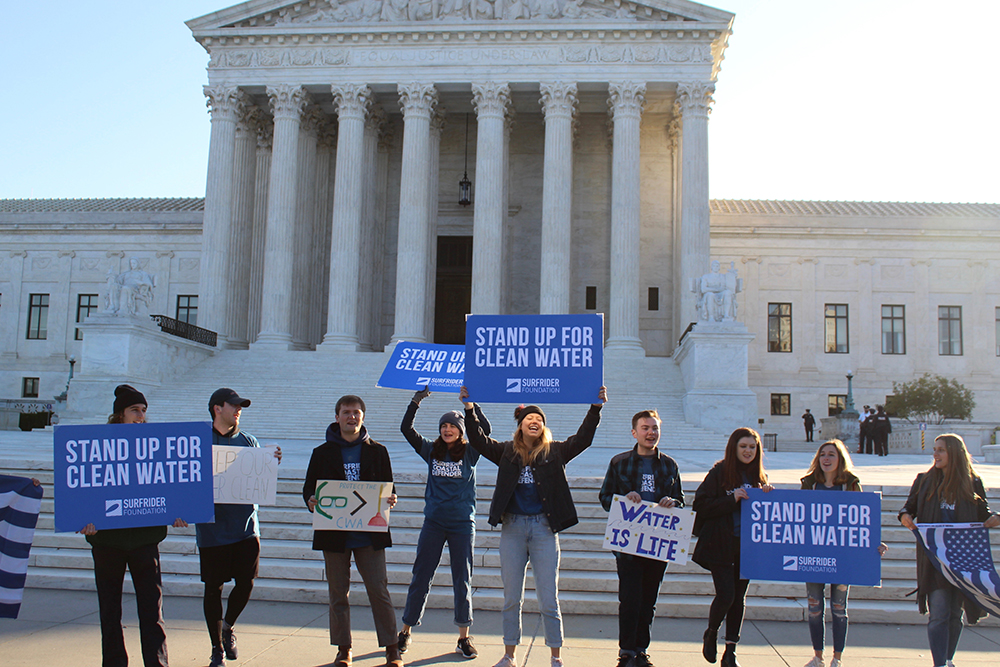 Surfrider Foundation and our co-plaintiffs in the Hawaiʻi Wildlife Fund v. County of Maui case are celebrating an important victory today with the decision to protect water quality and the intent of the Clean Water Act by the United States Supreme Court.  In a 6-3 ruling, the majority of the court refused to allow a large loophole in the Act and found that liability for pollution exists “when there is direct discharge from a point source into navigable waters or when there is the functional equivalent of a direct discharge.”

This litigation was filed to stop polluting discharges from the Lahaina Wastewater Reclamation Facility in Maui that discharges 3-5 million of gallons of treated sewage each day into the Pacific Ocean via the groundwater beneath the facility, devastating a formerly pristine reef and recreational resources, including at Kahekili Beach.  In April of 2012, Surfrider Foundation, Sierra Club-Maui Group, West Maui Preservation Association and Hawai’i Wildlife Fund, as represented by Earthjustice, filed suit in federal district court to address water quality violations of the County and the resulting intense threat to beachgoer health and safety posed by contaminated nearshore waters.

The Clean Water Act (“CWA”) requires those who discharge pollutants into navigable waters from pipes or wells to obtain a federal permit.  The district court and Ninth Circuit Court of Appeal agreed with the plaintiffs, but the County appealed to the Supreme Court. The question presented to the Supreme Court was whether the CWA requires a permit when pollution originates from a point source (like the wastewater plant on Maui) but is conveyed to navigable waters by a nonpoint source, such as groundwater here.

The November 6, 2019 oral argument at the United States Supreme Court indicated that the nine Justices did not agree with either the scope and interpretation of the CWA by the Ninth Circuit, which offered a “fairly traceable” test, nor that of the County of Maui and EPA, who advocated for a strict reading to encompass only pollution directly entering navigable waters.  The Court’s opinion, released today, provides that the scope lies somewhere in the middle. “We agree that statutory context limits the reach of the statutory phrase ‘from any point source’ to a range of circumstances narrower than that which the Ninth Circuit’s interpretation suggests.  At the same time, it is significantly broader than the total exclusion of all discharges through groundwater described by Maui and the Solicitor General.”

The high court appeared to find a middle ground today, ruling that “[t]he reading of the statute that best captures Congress’ meaning, reflected in the statute’s words, structure and purpose, is that a permit is required when there is a discharge from a point source directly into navigable waters or when there is the functional equivalent of a direct discharge.” The court goes to on say that there are many factors in determining functional equivalent, including time and distance and extent to which the pollutant is diluted.  Discussing the functional equivalent test, the court writes: “We think this phrase best captures, in broad terms, those circumstances in which Congress intended to require a federal permit. That is, an addition falls within the statutory requirement that it be ‘from any point source’ when a point source directly deposits pollutants into navigable waters, or when the discharge reaches the same result through roughly similar means.” The ruling makes clear that at least some instances where point source pollution (such as the injection wells in Maui) that travels through groundwater to a water of the United States, like the Pacific Ocean, will be covered under the Clean Water Act.

The Supreme Court remanded the case to the 9th Circuit for consideration in light of this new ruling and “functional equivalency” test.  Surfrider Foundation is very pleased with the Court’s ruling today, and we are confident that the 9th Circuit Court of Appeals will rule in our favor on remand.

Congratulations are deserved for Surfrider Foundation’s Maui Chapter that has been working on the complex and arduous campaign for over a decade in order to reach today’s rewarding decision!

Learn more about the positive work performed by the Surfrider Foundation by clicking on https://www.surfrider.org/