“WE CHECKED OUT SOME BOOKS PENNED BY SKATERS” by Matt L. Roar via JENKEM Mag 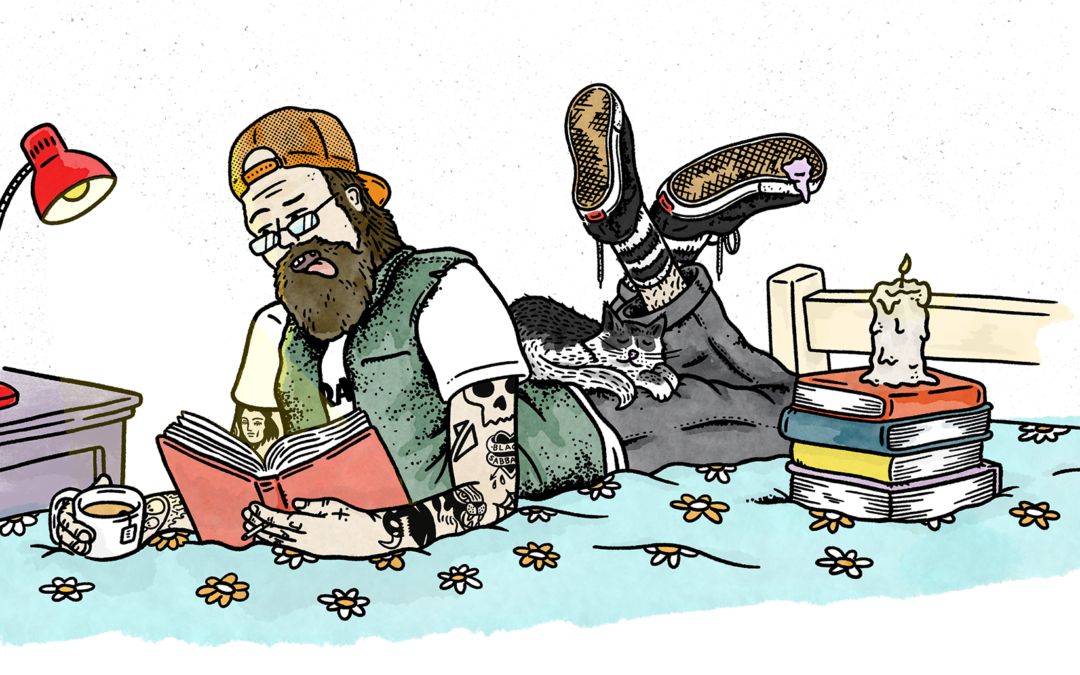 Every skater can name everything about their first deck or skate video. You remember the songs, the tricks, the outfits. You remember the art on your earliest completes, T-shirts, wheels, and if you’re a big enough nerd you can even recognize the visual aesthetics of your favorite filmer.

But who the fuck is your favorite skate writer?!

The literature of skating gets little to no love. Is this because skaters are dumb? Have short attention spans? Don’t read? I don’t think so.

Based on personal experience, we’re largely a thoughtful and decent bunch. To be fair, it makes sense that such a visual pursuit would be best captured in a moving picture, but for those of us who want more skate media—different skate media—who want to read books and talk about them to impress cute smart people… here’s a few books that capture what it’s like to be, as Jocko Weyland puts it, “under the spell of an activity that lies at the unique junction of sport and art.”

This is by far the gnarliest novel on this list. Like most skate-lit, and perhaps like skating itself, the skateboarding is a side note to the complicated, beautiful, and heartbreaking stuff of life.

If you like to mellow out by reading kids’ books or you wanna make sure your children grow up knowing what Hubba Hideout was, you’ll dig this tale of Jonas and how he falls in love with skateboarding.

Written by Karl Watson and illustrated by Henry Jones, these books will make you feel warm and fuzzy and renew your belief that skateboarding can bring all sorts of people together in supportive, creative, community.

I got it for my little cousin and he loved it so much he tried to break the handles off his scooter.

Shaggy is a purist of the old-school variety. He doesn’t skate on Go Skateboarding Day, he doesn’t fuck with mini-ramps because he’s 100% street, and the only way you’re gonna get your hands on his book is if you find one at your local skate shop or maybe if you harass him on Insta or run into him in the city where he’s often cruising around after work with fingerless gloves and a bandana, slanging zines and skate or dying.

His book is written in a stream-of-conscious style with lots of asides. He would’ve been homies with beat poets if he was around back then. Maybe he was?

Shaggy details how to drink beer at the shitty skate spot you’re way too attached to, what it’s like being the mayor of a park, vivid descriptions of skate injuries (trigger warning: includes graphic detail of compound fractures), and spicy confrontations with people on the street.

If you wanna read a novel and do a low-level good deed, you should know that one dollar from every copy of this book goes to Glide Church, which is a legendary church in the Tenderloin in San Francisco that’s been feeding the homeless community for decades, and has been doing advocacy work with the queer community from the 60s, through the AIDS crisis, to today.

Top of Mason is an accessible full-length work of fiction that lets us in on what’s it’s like to a pro skater in the modern era. The “come one, come all” nature of skateboarding means that skateboarders tend to shun the idea of fame and mainly pretend it doesn’t exist. But, this book explores fame and jealousy in the skateboard world in an honest and realistic way.

Believe it or not, it kinda hurts to be a mid-level pro with your best days fading fast behind you. The narrative style is accessible and playful. Though, if I recall correctly, he compares sex to vanilla ice cream, and I sort of wish he said Rocky Road, Rainbow Sherbet, or Cherry Garcia. A must-read if you’re a young skater still holding on to the dream of one day becoming an ex-pro with no health insurance.

KYLE BEACHY’S THE MOST FUN THING

The cover of this book is kinda emo, with a grainy photo of a broken complete. I wonder if the photo is posed, or if it was broken naturally whilst skating, or during an authentic hissy fit.

Kyle Beachy wrote this memoir/essay collection that is more about navigating life as a human being than it is about skateboarding, though there’s plenty of skaterism to keep you purists engaged. As usual, the stuff that surrounds the skating is often the most compelling, and that’s what this collection focuses on. Including essays on Andrew Reynolds, bad kickflips, marital probs, and more, The Most Fun Thing reminds us that “To know skateboarding is to know more completely the rigors, rewards, and negotiations of being human.”

Buy it on Amazon here.

This book is super tiny and will fit in the back pocket of some too-big-for-you jeans. While the cover features a generic illustrated CCS looking complete, the inside of the book makes up for it.

SKATEBOARD starts off discussing the lack of historical documentation of much of skateboarding and then aims to fill the gap with five smart and well-researched essays. One of my favorites focuses on photographer Jonathan Mehring’s journey from taking flicks of Josh Kalis at Love Park and having to hound the editors at Slap to pay him his paltry $100 bucks, to eventually receiving real funding to travel the world photographing the “global language” of skateboarding for his National Geographic book Skate the World.

There’s also an essay on Mark Suciu that applies formal literary analysis to the construction of his Verso part. It’s very Suciu. If you were the smart kid in your high school English class, read SKATEBOARD.

LEO BAKER’S SKATE FOR YOUR LIFE

If you’re lazy, you could probably watch the Leo Baker NETFLIX documentary and pretend you read the book. But you shouldn’t do that because Skate for Your Life is super easy to read, honest, and vulnerable. It’s critical of how the gatekeepers of the skateboarding industry have been at odds with skateboarding’s spirit of unrestrained free expression.

According to JD Samson from Le Tigre, this autobiography “synthesizes what so many LGBTQIA people can relate to–the lifelong journey of seeking out spaces where we fit in, and when we don’t find them, making new ones.” This book would be very empowering for any person who feels different and is trying to figure out how to exist in a world trying too hard to make them conform.

JOCKO WEYLAND’S THE ANSWER IS NEVER

The back cover has the fully bald author doing a frontside rock in a bowl, which I think captures the spirit of this book.

This book starts off with our author, legendary zinester, Jocko Weyland, learning to skate alone in idyllic circumstances, in a beautiful mountainous landscape surrounded by trees, the sounds of nature, and a 9-foot half pipe. Hopefully all you readers are blessed with some similar memory of a perfect skating moment. Mine is gliding through the dark at the old Union Square, San Francisco, behind the wooden walls they’d put up the week before they tore out all the old marble ledges. RIP.

Anyways, Weyland juxtaposes his own mid-30s battle with a five-stair with Tony Hawk’s simultaneous 900 at the X Games. Even though the X Games are in there, this book is an homage to the outsider status of skating, focusing on bondo-ing cracks, green and purple hip bruises, and dodging “the man.” 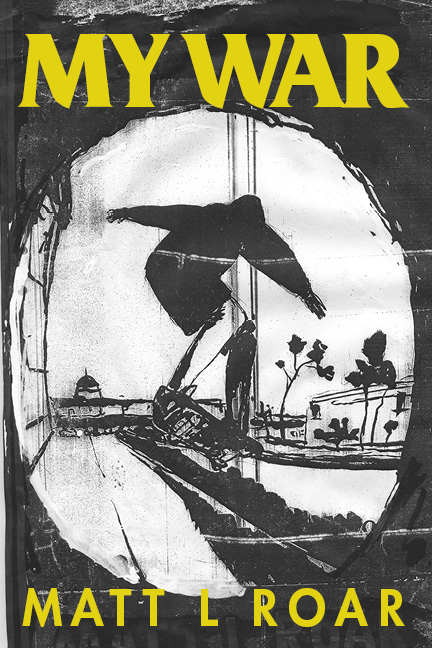 I wrote this book over about a ten-year period, stealing its title from the Black Flag album that later inspired the Thrasher series of the same name. The cover is my buddy Pier 7 Jacob doing a nollie fs crooks at SF Public Library. It’s an ink drawing but I swear on my honor he stuck it.

It’s a hybrid form of text, so it’s part poem, part memoir, about growing up skating and doing graffiti in the late ’90s early ’00s in the San Francisco Bay Area. If you’re a US senior citizen skateboarder like me (35+) there’s a good chance your dad was drafted and forced to go to war in Vietnam. So the book is a little bit about that, and a little bit about the sometimes painfully close relationships we have as skaters.

BRA and other Book Review Articles

“Maya Gabeira Wrote the Most Beautiful Children’s Book: ‘Maya and the Beast’” by Alexander Haro via The Inertia