“We Spoke With Joel Tudor and a WSL Insider About Tudor’s Suspension; Here’s What They Had to Say” by Alexander Haro via The Inertia 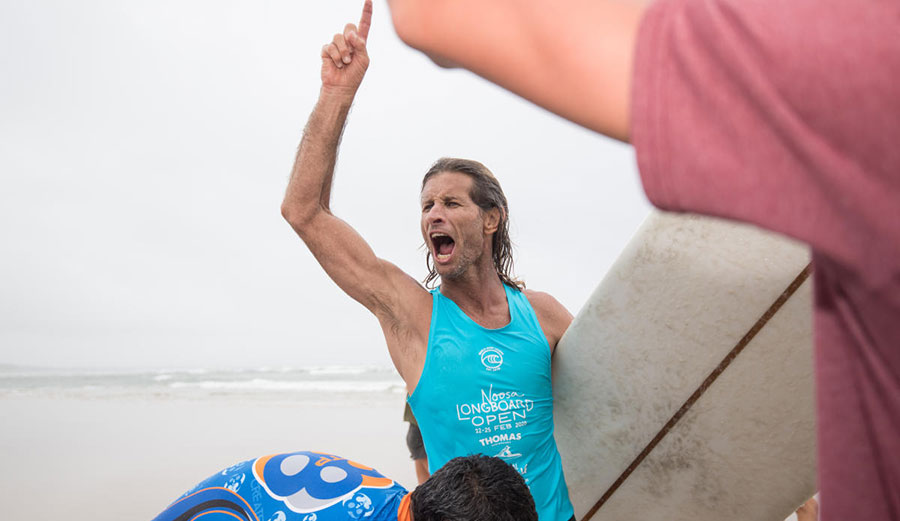 After Joel Tudor was suspended indefinitely by the World Surf League, we caught up with him to hear his thoughts. Photo: Thomas Bennett//WSL

Joel Tudor, three-time and reigning world longboard champion, was suspended from competition this week by the World Surf League. The suspension could be seen as a drastic measure, considering that a world champion hasn’t ever been suspended from competition before. In short, Tudor called the World Surf League out for a variety of reasons that centered around equality and the number of longboarding events on tour. A WSL insider, however, told us his suspension stemmed from the fact that he called the League out. “The suspension is the result of a now-deleted post,” the source said, “that included baseless accusations of corruption and personally attacked the head of tours.”

Tudor’s conduct apparently prompted the ruling, with the WSL citing a violation of its rule book: “Sportsmanlike conduct (14.02), damage to surfing’s image (14.04), and verbal assault (14.08).”

With that as a backdrop, I spoke with Joel on the phone to get his thoughts on the whole debacle. When we talked, it was early morning in Hawaii, where he’s vacationing with family. After a bit of banter about trivialities, Joel and I bit into the meat of the call. Shortly after, I spoke with a WSL insider to get both sides of the story. As is the case with most things, the truth probably hangs somewhere in the balance.

What are your thoughts on the suspension?

Joel Tudor: That was kind of funny, wasn’t it? I just think there’s a mix up in priorities. You can shoot your board and try and stab someone in the face and still compete, but you can’t ask for equal pay for the ladies or for information on our tour and where we stand. We’re living in a strange time. I must’ve brought up something that hit a little close to home.

WSL Insider: Every event the WSL owns or operates pays men and women the exact same amount of prize money.

Joel Tudor: Yeah, I had nothing to do with that. I don’t know anything about that stuff.

WSL Insider: There certainly were threats that resulted from his now-deleted post with baseless allegations of corruption.

They didn’t tell you that a bunch of people sent WSL employees threats?

Joel Tudor: No, nothing like that. I mean, I haven’t really spoken with anyone. After that first post I put up, I thought I might get a phone call to maybe negotiate something for a better future, you know? You’re supposed to use your platform to be heard.

WSL Insider: Devon Howard is the Head of Longboard and speaks to Joel regularly. His line is always open. As far as the conversation regarding his suspension, he had multiple WSL individuals reach out, but he refused to engage.

Did you try and get a hold of them about when and if the events might be running before going to social media?

Joel Tudor: We’d gone through the process — everyone was emailing to try and find out [when the LBT events might be running], so I just took it upon myself to try and raise awareness that these kids are getting slammed. You have to remember that I wasn’t even going to compete this particular year.  I have other shit going on. I was really just trying to help these guys out. You know, we’re into March, and we weren’t getting any response. It’s been since October. That’s a long time. The majority of the tour has to work regular jobs or do a GoFundMe. These kids need some advance notice if they’re even going to be able to compete. I wasn’t really asking a lot. I would have loved to have a conversation after my first post up until my suspension, but I never even got that opportunity.

WSL Insider: I think the WSL would own that. The League is happy to engage in constructive criticism. Personal attacks and allegations of corruption are not constructive and wouldn’t be tolerated by any professional sports league on the planet.

There was never even a phone call?

Joel Tudor: I reached out to the commissioner [Devon Howard] multiple times, but he can only do so much. He’s just a representative. He doesn’t really have the final say when it comes to the people that we wanted to have a conversation with. It was never even really an option, you know? Devon’s doing the right thing, he’s just kind of caught in the middle. He’s not behind me being suspended, he’s just doing what he’s got to do. He works for the WSL, so I totally understand. At the end of the day, my intention was literally just to try and help these kids get paid. I mean my God, it’s been the same pay since 1992, you know?

Are you planning on disputing the suspension?

Joel Tudor: To be honest with you, I can’t really say. I don’t know what I’m doing. I’m on vacation in Hawaii (laughs). I’m not going to run around stressing about it. I didn’t compete for 17 years prior to this, so you know… suspend me all you want.

And after 17 years, you came back and won another world title.

Joel Tudor: Look, I always knew I could win. I could have won multiple times in the last 17 years. There’s no question, you know? But my heart wasn’t in it, and we started our own thing with the Vans Duct Tape, so obviously you put your focus into where your heart is. But then the last few years, everything got canceled due to world events and stuff like that. The only option to compete was the WSL, and I’d been offered a wild card, which was nice of them. And then I won, so I got to do the rest of the tour events. I don’t think I really even would have competed had it not been for the situations that are going on around the planet. I would have just stayed doing my own thing and not even bothered. But I just did it for the fun of it. Winning kind of put me in a spot where I was like, “Oh shit, I guess I’m on top.”

That world title seemed like a jumping off point to call attention to the issues you have with the WSL?

Joel Tudor: When all this stuff started happening, I thought that maybe I should use this opportunity to try and raise awareness to try and help these kids. Which is really what you’re supposed to do. I didn’t really do anything wrong. I don’t feel like the bad guy here. I’m trying to get the ladies paid, because the value is there. It’s undeniable. They’re a big part of the image of surfing that’s portrayed to the masses, you know what I mean? How come these women aren’t deemed as valuable, as much as you use them? I don’t think I was too out of left field. It was kind of simple request.

A couple of the longboard competitors went out and raised money on their own for events for this coming year, and the WSL turned it down. They had raised the funds so that we would have a tour, and we were basically told, “Nah, we can’t be bothered.” That’s kind of when it all started. We thought, “Woah, woah, woah, we’ve raised the money for you, and you won’t sanction our events?” It’s kind of gnarly, you know? It’s just kind of a slap in the face.

Joel Tudor: Can we have our two or three events back? Sorry if I’m asking a lot. I mean, that was about it. We weren’t asking for a full tour. Just a few more events and maybe bump up the purse a touch. That’s it, you know what I mean? We’re not asking for another $10K, but Jesus, you could at least adjust to where these kids have some kind of an opportunity to make a living, instead of spending their living to come and compete.

WSL Insider: Purses reflect the commercial viability of the event. When the WSL runs whatever stops they decide on this year, they’re going to lose money, but they’re committed to crowning a champion.

If the goal is to get more viewers and in turn, more brands willing to sponsor events, how do you think that could happen?

Joel Tudor: We used to be allowed to share the same stage. The Bells event, Margaret River… They even did it on the Gold Coast once. Just run it on one of the down days. There are so many down days where the waves are smaller and fun and perfect. We’d just share the same stage. We’d just be one additional feather in their cap to create a great platform for viewing. The whole goal is to get more people to watch. Then the happier the sponsors are, the more money they might give. We’re actually a cool thing to watch, you know?

WSL Insider: Those are conversations that are worth having in a meaningful way. The WSL wants to make this work in the best possible way. If everyone operates with the presumption of good faith, you can make progress. Reckless accusations of corruption aren’t going to ensure progress.