“What does the pandemic mean for mobile pay?” by Tom Ryan via Retail Wire 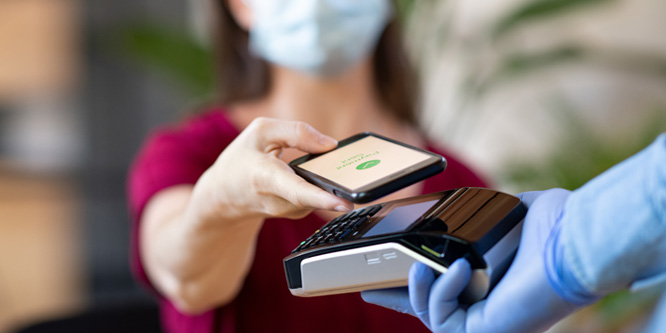 While there’s no evidence COVID-19 can be transmitted by cash or credit cards, the use of mobile payments and contactless cards has taken off in recent months over concerns about touching surfaces, according to research from the National Retail Federation’s “State of Retail Payments” study.

“Retailers are putting health and safety first and have rolled out a variety of no-touch payment options in order to err on the side of caution,” said Leon Buck, NRF VP for government relations, banking and financial services, in a statement.

A separate consumer survey found 19 percent made a digital payment in a store for the first time this May and 57 percent would likely continue to do so once the pandemic has subsided. Of those, 62 percent used their phone and 56 percent used a contactless card.

On the downside, according to NRF’s study, higher costs, including fees for processing transactions, are the top concern for 67 percent of retailers that accept no-touch payments.

Banks charge a fee averaging about 2.5 percent when a credit card is used for an in-person purchase, and the fee climbs slightly higher for transactions made online or over the phone. Curbside pickup and BOPIS are also charged at the online rate, despite in-store retrieval.

Debit card transaction fees also run high since many have to be processed over networks run by Visa and MasterCard when a PIN isn’t used. NRF is lobbying the Federal Reserve to expand access to lower-cost ATM networks.

DISCUSSION QUESTIONS: Will adoption of mobile and contactless payments accelerate as the corona virus crisis continues? Do you see the benefits to consumers outweighing any negatives to retailers?

Retail Wire is retailing’s premier online discussion forum, serving the industry as a free resource for over 18 years with compelling content that goes well beyond conventional headline reporting.