“What Does the Reaction to Tyler Wright’s Stand Say About Surfers? SURF CULTURE, RACIAL JUSTICE AND SOCIAL MEDIA’S POISON PILL” by Todd Prodanovich via Surfer Mag 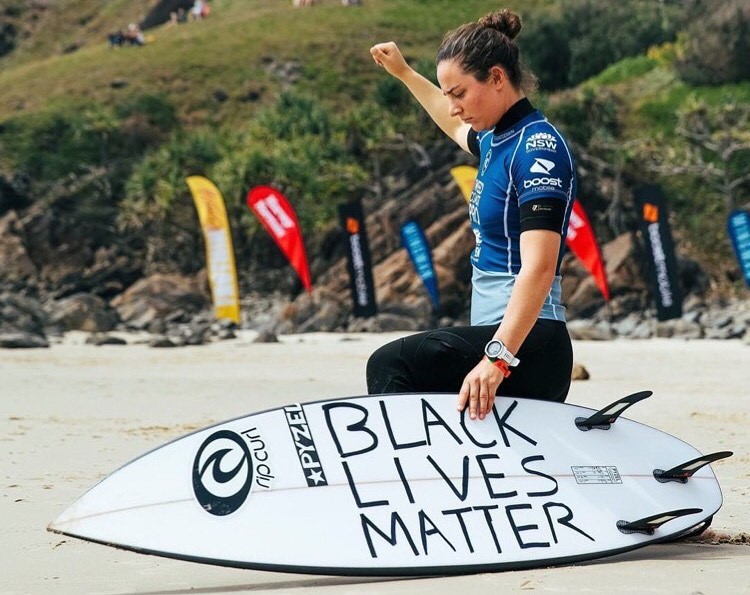 Photo Credit: Ryan MillerTyler Wright, standing up for Black lives on her way to victory at the Tweed Coast Pro.

On Sunday morning during the WSL’s Tweed Coast Pro pandemic-era specialty event, two-time world champion Tyler Wright made the biggest news (see: only news) of the otherwise lackluster surf comp when she kneeled next to her board painted with “Black Lives Matter” for 439 seconds, each second representing one of the First Nations people who have died in police custody in Australia since 1991.

It was always going to be impactful, as Wright was the first World Tour surfer to use their platform to publicly support the Black Lives Matter movement, but I never would have guessed that it would also be so controversial. After all, Wright may be the first World Tour surfer to take this stand, but she’s far from the first pro athlete. Players in the WNBA, the NBA, the MLB and the NFL have been publicly supporting the movement for months, recently culminating in a historic, multi-league strike in the wake of the shooting of Jacob Blake by police. Just last week, a Washington Post poll of Americans showed that 62 percent of participants believed that athletes “should use their platforms to express their views on national issues.” And that poll was taken from a random national sample—coastal surf fans would skew even more progressive than that, right?

Apparently not. Or at least that’s not what the reaction by surfers would suggest. At the time of this writing, the comments on the WSL’s post of Wright kneeling total nearly 5,000 – perhaps the most ever for a non-shark-attack-related post on the WSL’s page. And while there are some messages of support for Wright and the Black Lives Matter movement, the vast majority are negative, filled with accusations of virtue signaling, woke pandering, and racism. There’s talk of “all lives matter”, based on the false premise that “Black lives matter” actually means “only Black lives matter” instead of what it really means—that Black lives aren’t insignificant and should be respected by society no more or less than the lives of those with lighter skin. And, as has become custom in this era, there’s also a boatload of disinformation alluding to popular conspiracy theories—like the one that suggests that the current racial justice movement is actually a George Soros-backed communist/terrorist plot to destroy America.

That’s right, the same Black Lives Matter movement that has seen more than 15 million participants, many of them middle-aged moms, is supposedly just a bunch of political props paid for by a Jewish billionaire puppet master. Never mind the fact that this racist, anti-Semitic conspiracy theory (and many just like it) have been disproven time and time again by reputable news sources.

So what do we do with this information? What should our takeaway be? That surfers are a bunch of hateful racists and anti-Semites? As a third-generation surfer who has spent my entire life around other surfers, I don’t think that’s true. What’s much more likely is that the same cultural and technological forces that pouring gasoline on racial tensions throughout the rest of society at this moment are impacting surfers as well.

Surfers, like everyone else, are probably spending an increasing amount of time on social media. The New York Times reported back in April that Facebook’s web traffic had risen by nearly 30 percent since the start of the pandemic. Social media platforms have proven to be the perfect Petri dish for harmful disinformation to be grown and spread, with a 2018 study by MIT scientists showing that false claims were 70 percent more likely to be shared on Twitter than true stories. That means that most of what is shared on social media is based on falsehoods, pulling unsuspecting people into alternate, conspiracy-filled realities—realities where Donald Trump is a hero fighting a secret cabal of pedophiles, the global pandemic is a carefully-orchestrated hoax and the biggest racial justice movement in history is an elaborate stage play.

The spread of disinformation is dangerous, of course, as there have been multiple acts of violence linked to various conspiracy theories, and terrorism experts believe they’re a threat to national security. The reason social media platforms haven’t made a real effort to curtail the spread of these threats is that they have strong financial incentives not to. Posts based on false information not only spread farther, but they have increased engagement and lead to more time spent on the platforms and more opportunities to be served advertisements (watch “The Social Dilemma” on Netflix for a deep dive on this). Why would Facebook founder Mark Zuckerberg, who has seen his wealth increase by more than $20 billion this year (for a total of $100 billion), want to limit the very thing that keeps people hooked on his platform and keeps the dollars pouring in?

He wouldn’t. At least not by choice, which is why the regulation of tech giants is going to become an increasingly important conversation, and why countless users and publishers are participating in the #StopHateForProfit campaign (SURFER included) to oppose the unmitigated spread of hate, bigotry, racism, antisemitism and disinformation on social media by boycotting Facebook’s platforms today.

So if you look at the WSL post of Wright taking a knee for Black lives, and the 5,000 comments underneath it, and you think there’s a problem there, you’re absolutely right. But it might not be exactly the problem you think it is. The biggest problem highlighted by that post is just how effectively disinformation has spread through the surfing community, just like it’s spread through every community. It’s incredibly important to oppose racism—and I honestly don’t believe many surfers would argue with that statement—but one of the least-understood and most-effective ways to do so is to protect yourself and others from consuming false information designed to sow conflict, instill fear, and, of course, drive revenue.

Of course, if you do disagree that it’s important to oppose racism, you’re not misinformed. You’re a racist. And Facebook, apparently, is happy to have you.

From Facebook’s perspective, the Tyler Wright Instagram post is proof of concept (it should be noted that Instagram is owned by Facebook). Because so many of their platform’s users are coming from ill-informed perspectives, priming them for conflict at all times, a simple image of a surfer showing support for racial justice can become a jumping off point for thousands of people to battle around the clock for multiple days straight, constantly returning to the app to respond to new comments, being served more ads each time, rinse and repeat. In the end, nobody wins except for Facebook. Not the commenter who most brutally destroyed their opponent. Not the one who got the most likes. Certainly not surf culture.

Well, I take that back. Tyler Wright also won. She won the whole damn contest, and she did so while simultaneously standing up for something important. I just hope she hasn’t read the comments.