“Will Inflatable Artificial Reefs Turn Lackluster Beaches Into Pumping Peaks? The “Airwave” will soon be making its debut in West Oz” by Ashtyn Douglas via SURFER 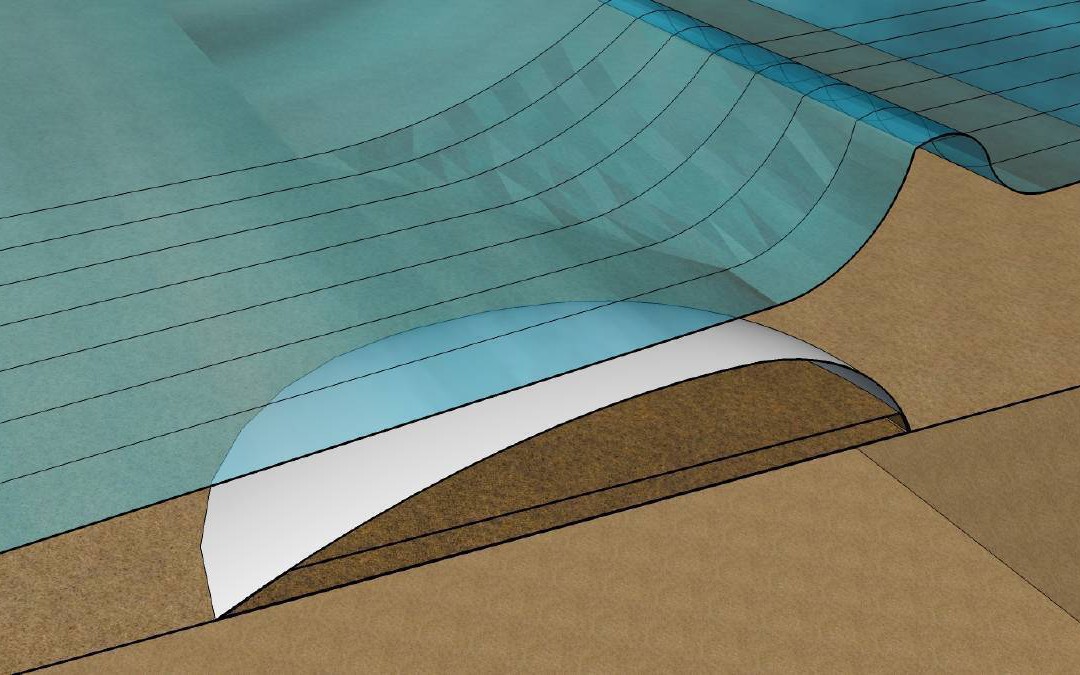 A little over a year ago, a Yallingup-based surfer named Troy Bottegal started a Kickstarter campaign to crowdfund the creation and launch of a new artificial reef structure he’s been prototyping over the last decade. Similar to artificial reef projects of the past (some of which failed miserably), this structure, Bottegal claims, once anchored to the seafloor can turn a bank-less coastline into a surfer’s paradise. The unique part that separates Bottegal’s invention from bygone made-made reefs? It’s inflatable.

Bottegal’s brainchild is called the “Airwave”–the UFO-looking object. It’s a two-meter tall, twelve-meter wide dome-shaped bladder that, according to Waveco’s (the company now behind the Airwave technology) site, is designed to mimic a reef’s shallow leading edge to transform closeouts into fun, peaky A-frame wedges.

The blow-up reef will be partially filled with tons of sand. This, combined with its large base footprint, will apparently render the structure impossible to move during big swells. The Airwave can be removed, however, in the event that it causes any negative environmental impact.

According to the Waveco site, the installation process is fairly straightforward. “Six individual Airwaves can be installed at the same stretch of beach, in around 14 days,” the site notes. “That’s six new wave sites in two weeks. Compare this with the twelve to twenty-four months for a typical offshore surf reef installation, with only one wave site created.”

Another point of difference between Bottegal’s design and other artificial reefs is that it’ll be placed in shallow waters. “Placing it in shallow enough water ensures the wave will not dissipate into deep water after it starts peeling,” he told MagicSeaweed earlier this year in an interview. “Previous ASR’s have failed because they have tried to recreate whole surf reef systems, instead of just installing only the necessary parts of the reef.”

Bottegal’s goal is to bring these rubber reefs to wave-starved surfers far and wide, starting in West Oz (an area of the world quite possibly the least starved for reef waves, ironically). At some point during the month of November, Bottegal and his team will be installing the first Airwave along the coast of Bunbury to test-drive how the structure fares during a good swell.

Oh, and if you’re already imagining one of these things transforming your C-grade local beachie into a world-class A-frame, you’ll have to convince your local city council that this air/sand bladder is worth the $350-400K installation costs. Which, if you compare it to the millions of dollars that have gone into past reef installations, ain’t a bad deal.

This story originally appeared on SURFER and has been republished with permission. Words by Ashtyn Douglas.

For more interesting and valuable articles as well as a ton of epic surfing, visit SURFER.